As shown in Figure 5, the input current, II, of the buck regulator is a pulsing waveform, which is the main source of conducted, differential EMI injecting back into the power source VS. Conducted emissions are primarily driven by fast-changing current shapes at the input of the converter (di/dt). The value of conducted emissions is measured as voltage at the input of the converter, VS, using line impedance stabilization network (LISN). The input capacitor CI function is to filter out the AC (pulsing) component. The net current IS is the difference between II and ICI. We want IS to be DC or as smooth as possible. If CI is an ideal capacitor with infinite capacitance, it would keep VI constant and effectively filter out all AC component of I1, leaving a constant (DC) current flowing from the source VS and a constant DC voltage drop across the source impedance RS. In this case, the conducted EMI would be zero since IS is a DC current. In practice, we use a π-filter between the input source and the converter to contain conducted EMI within the regulatory limit.

Conducted emission usually poses a greater problem for fixed systems than for portable systems. Because the portable device operates from batteries, its load and source have no external connections for conducting emissions.

Radiated EMI are fast-changing magnetic fields that have high-frequency content of 30MHz and above. Magnetic fields are generated by the circuit’s current loops. Changing in these fields, if not properly filtered or shielded, can couple into other nearby circuitry and/or equipment and cause radiated EMI effects.

Figure 6 shows a buck converter with its fast di/dt current loops I1 and I2. The current loop I1 conducts during the on-time when S1 is on and S2 is off. The current loop I2 conducts during the off-time when S1 is off and S2 is on. The pulsating nature of the current loops I1 and I2 causes change in the magnetic fields with field strength propositional to the change of the current magnitude and the area of the conducting loop. Fast di/dt current edges generate high-frequency harmonics EMI in the regulatory radiated range. Keeping the area of these current loops small will minimize the field strength. Slowing down these edges will reduce the high-frequency harmonic content of the switching regulator, but slow transitions impact the regulator efficiency due to wasted energy. We’ll discuss ways to minimize the EMI radiation without impacting efficiency.

The voltage node LX (some vendors call it SW or other names) is a rectangular wave (ignore the parasitic ringing for now) that is connected to the inductor. Fast LX’s dv/dt voltage discontinuous edges couple high-frequency current to CO and the load through the output inductor’s parasitic capacitance, which can in turn generate EMI noise. It is important to minimize the output inductor’s parasitic capacitance to reduce this noise-coupling issue. LX also has high-frequency parasitic ringing. Using an RC snubber network from LX to GND helps reduce this ringing.

The same principle of the EMI noise sources described above applies to other switching-converter topologies as well. But the severity of the noise depends on the current and voltage wave shapes of a specific topology. For example, a boost converter running in continuous conduction mode has less conducted EMI component at its input, since its input current is more continuous compared to that of a buck converter.

Fixing EMI on a power system after the fact is hard, time consuming, and costly. Designing and planning for EMI compliance upfront is critical for project success. Common techniques to minimize EMI are line filtering, power-supply design, proper PCB layout, and shielding.

To reduce conducted emissions from a power converter, a π-filter is used between the input source and power converter. The design procedure to select the filter components is as follows: 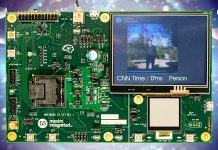 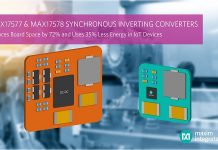 DC-DC Inverting Converters That Reduce Component Count By Half 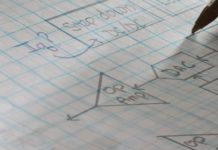