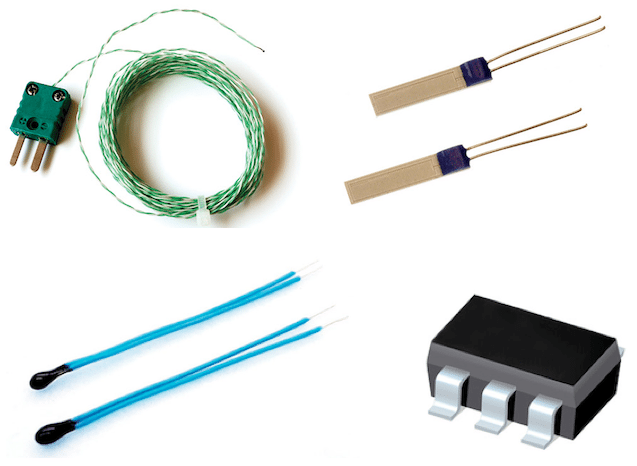 Device output is typically connected to a stand-alone or integrated ADC. These temperature-to-voltage converters can sense a -55°C to +150°C temperature range and feature an offset voltage that allows reading negative temperatures without requiring a negative supply voltage.

Applications include measurement of temperatures in instrumentation and consumer electronics, and LCD contrast control by measuring panel’s temperature in mobile phones.
Digital sensors. When higher levels of integration became feasible, temperature sensors with digital interfaces became available that communicate temperature data with the microprocessor through digital interfaces such as SPI, SMBus or I2C. Along the same bus, data is sent to the temperature sensor from the MCU, to set the temperature limit at which the alert pin should signal or interrupt the MCU when temperature limit has been exceeded.
If fan monitoring and/or control is included in this type of IC, the MCU is able to adjust fan speed or reduce the speed of a microprocessor, for example, to keep temperature under control. However, there are certain high-temperature scenerios when the MCU is not functioning. Then, another signal can be used to shut down the system power supplies directly, without the MCU, and prevent a potentially-catastrophic failure.

Most digital temperature sensors include one or more outputs that indicate that the measured temperature has gone beyond a preset (usually software-programmable) limit. These typically function as a thermostat, notifying the system that a minimum or maximum temperature limit has been reached.

Digital sensors offer many benefits over their analogue counterparts. Their more robust outputs than analogue sensors make these less susceptible to noise, allowing these to be placed 20 to 30 centimetres from the MCU even in noisy environments. Moreover, these can operate on the same bus used by other digital interface devices.

Analogue sensors need to be placed very closely to the MCU as the analogue output signal that carries the temperature information is susceptible to noise. For instance, some digital sensors can handle up to 300mV noise without delivering false data, whereas analogue sensors typically output 10mV/°C and start giving erroneous data if 10mV of noise is introduced.

Another advantage of using a digital temperature sensor is that all of the errors involved in digitising the temperature value are included within the sensor’s accuracy specifications. In contrast, an analogue temperature sensor’s specified error must be added to that of any ADC, amplifier, voltage reference or other component that is used with the sensor.

Remote temperature sensors. Digital temperature sensors can measure temperatures of remote diodes in addition to local temperatures in order to protect sensitive devices like field-programmable gate arrays, MCUs, video processors or power field-effect transistors. Remote diode-sensing chips are specifically designed to measure the temperature of a thermal diode or multiple locations on a PCB more accurately and convert it directly to digital form. Some of these ICs monitor a single thermal diode, while others monitor as many as four, using an SMBus interface.

Accurate fan speed monitoring and/or control is an important application of remote diode sensors, which improves performance of servers, video projectors and telecom equipment. Most fan controllers use pulse width modulation (PWM) to control DC fan speed rather than stopping operation when temperature rises. Some fans emit an audible sound at the frequency of the PWM signal controlling it.

Given below are some important points to note while selecting a temperature sensor. Thermistors are the most sensitive but also the most non-linear. These are mostly popular in portable applications to measure battery temperature and other critical temperatures in a system. When a linear relationship between voltage and temperature is needed, a silicon temperature sensor is a far better choice than a thermistor. Over a narrow temperature range, however, thermistors can provide reasonable linearity and good sensitivity.

Many circuits originally constructed with thermistors have over time been updated using silicon temperature sensors. RTDs are accurate but require excitation current, and are generally used in bridge circuits. Thermocouples are rugged and can operate over the widest range of all temperature sensors. These are especially useful for measurements at extremely high temperatures in hostile environments.

Upasana Dewan is an electronics engineer having keen interest in writing about engineering design and innovation topics including the Internet of Things, artificial intelligence, robotics, optoelectronics and electric vehicles