Power-on reset is provided by the combination of resistor R5 and capacitor C6. Switch S20 is used for manual reset. A 12MHz crystal along with two 33pF capacitors provides the basic clock frequency to microcontroller AT89C51.

Address lines of the encoder (IC1) and the decoder (IC4) should be identical for data reception in the receiver. Here addresses are made identical through switches S18 and S19. When any of the keys on the keypad is closed, the corresponding data pin of the decoder goes low. When any data is received, valid transmission pin (VT) goes high as indicated by LED2.

Data outputs D8 through D11 of HT12D are connected to port pins P0.0 through P0.3 of the microcontroller. The microcontroller receives the decoded data and controls the corresponding relay through relay drivers ULN2003 and ULN2803. The device to be controlled is connected to the relay contacts. Unregulated power supply is used for relays.

The 230V AC mains is stepped down by transformer X1 to deliver a secondary output of 6V, 500 mA. The transformer output is rectified by a full-wave rectifier comprising diodes D6 through D9, filtered by capacitor C8 and regulated by IC 7805 (IC8). Capacitor C7 bypasses the ripples present in the regulated supply. LED3 acts as the power indicator and R6 limits the current through LED3.

After assembling the transmitter, receiver and relay sections on the respective PCBs, pull pin 1 of both HT12E and HT12D to ground. LED2 connected to VT pin of the decoder should glow, indicating that a valid signal has been received. 255 sets of transmitter-receiver pairs can be used within the same area, each with a unique address. Alternately, we can also control 255 receivers with a remote control by changing the address. Now your RF-based multiple device control system is ready for use. 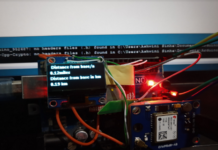