This project aims to develop a wearable safety and alarming device that can be operated easily, especially by children and senior citizens when in distress. It may come handy as the world is constantly witnessing increase in the number of criminal activities. Senior citizens living alone are vulnerable to panic situations due to safety reasons or, sometimes, a medical condition. This device can send an SOS call and simultaneously raise an alarm, if needed.

The device most often used for such a purpose is the SOS button. It is a discreet device that lets the user send an SOS alert to quickly communicate for help from a trusted person by using GSM, GPS, or GPRS. It is used especially for anti-aggression alarms in jewelery stores, banks, or small businesses, and for personal safety. 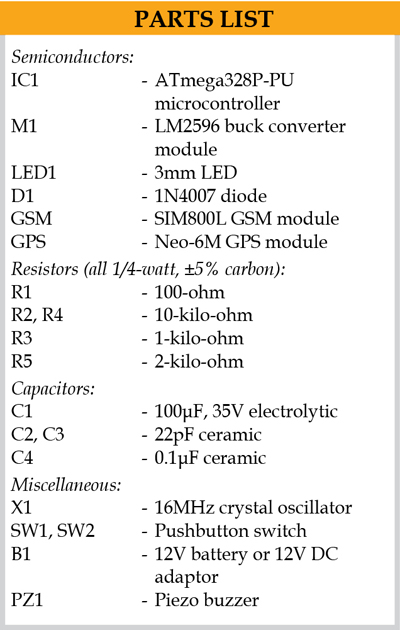 In this project, we aim to build a customised, cost-efficient version of the SOS button, which is stealthy and uses the best in class GSM-GPS modules along with a high-decibel buzzer. Its hardware interfacing on breadboard is shown in Fig. 1.

The components used in the project and their function is described below.

SIM800L is a miniature cellular module that allows GPRS transmission (sending and receiving), SMS, and voice calls. It is a low-cost device with small footprint and quad band frequency. The module is a perfect solution for any project that requires long-range connectivity. Pin details of SIM800L are shown in Fig. 2.

Neo-6M GPS module is a well-performing complete GPS receiver with a built-in 25x25x4mm ceramic antenna, which provides a strong satellite search capability. With the power and signal indicators the status of the module can be monitored. The GPS module is shown in Fig. 4.

As shown in the block diagram (Fig. 5), there are also some other components like push buttons (SW1 and SW2), GPS module, GSM module, and power supply. The circuit diagram of the project is shown in Fig. 6. The microcontroller is, of course, the heart of the project.

Whenever the push button SW1 is pressed by the caller, the microcontroller gives the information about the caller, like his/her location and emergency SMS, to the registered number in GSM module. As a result, the receiver mobile receives caller’s SOS message.

As shown in the circuit diagram, push button SW2 is used to reset the circuit (whenever there is something wrong in the program). LED1 is used to indicate the presence of power in the circuit. The circuit can be powered by a 4.2V supply from the converter LM2596 module.

Arduino IDE 1.8.15 is used to write, compile, and upload the code (smart_SOS_final.ino) into the Arduino board. The code requires TinyGPS++.h header file. The header file can be downloaded from Link

Before uploading the code, enter a valid 10-digit phone number in the code

where ‘xxxxxxxxxx’ is the phone number to receive the SOS message in the receiver’s mobile phone.

EasyEDA is a free web based EDA (electronics design automation) tool, which gives facility to design schematic diagrams as well as PCB layouts. After completing schematic diagram on EasyEDA platform, select DesignConvert schematic to PCB. Adjust all the components of the circuit in best minimum space. Then select RouteAuto route.

EasyEDA can generate 2D and 3D visualisations of the PCB. To get them, select 2D View and 3D View, respectively. The 3D view is shown in Fig. 7.

Assemble the circuit on a breadboard or PCB. Insert the SIM card in the slot of GSM module. When SW1 is pressed, GSM calls the mobile number already entered in the program code and the buzzer sounds. The buzzer sound is to alert nearby people.

Kamlesh Vasoya is an electronics hobbyist

Vector Signal Generator With Over Range Mode Of 72GHz