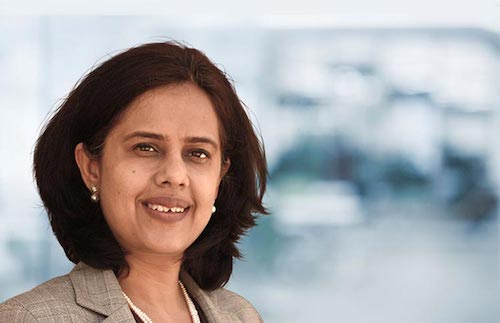 Q. What’s the impact that you believe women technologists can have if they put their minds to participating at events?

A. Participating in events and conferences has not only helped me grow professionally but also network and collaborate with more people. It also broadened my knowledge on various technologies that other organisations were working on. Such events provide a platform for women technologists to voice their diverse thoughts and approaches, which are sometimes the starting point for setting market/industry norms.

Q. What observation led to the realisation that women were hurting their prospects by not participating at these events?

A. When I started stepping out to speak at conferences, seminars and panel discussions, I realized that both the speakers and audience were predominantly men. Occasionally, I felt lonely as there were very few women at these events. However, when I later started participating in events like Grace Hopper, I saw a considerable number of women participating and speaking at those events.

There is definitely no paucity of skilled women or opportunities and over time the approach has changed for the better. More women are stepping out to speak at conferences. However, there is still scope for improvement.

Q. What are your views on mandatory maternity leave, reportedly causing startups and small firms to reduce hiring women, and the suggested longer paternity leave to balance this out?

A. Sometimes you should not have a solution chasing a problem. All women need maternity leave, so it is something that is provided because it has to be respected by the system. I took maternity leave for both my kids. At that time, it was three months, but it wasn’t enough, so I ended up taking seven months of leave in both the situations. Six months leave is a need; it gives the mother just enough time to settle things at home and come back to her workplace with a tension-free mind. I believe the system will evolve and start-ups that ignore the female talent pool will fail because it is contradictory to their very nature and the main reason for their success – which is embracing diverse thought culture in designing and launching the product. The benefit of diversity is so high that they cannot avoid the talent pool.

Q. How do you personally enlighten the women around you, such that they understand their potential and also go around to empower other women? So that an organic effect happens and grows.

A. I feel the best way to do it is when you are leading by example and sharing your own stories. I have many women in my team, and I ensure that I am sharing not just the things that I do but also the things that I am not able to do. For example, since I go to many conferences, I get invitations to attend as a speaker at other events too. So, I share these opportunities with my colleagues so that they too can grow and get similar opportunities and build their eminence. I believe, the opportunity that you get should not be limited to just you; it has to be shared with others so that other people too can grow. So, it is a culture which breeds, and it trickles down creating opportunities for everybody around.

Q. Talking about IoT, what sparked the idea for, “Recipes of IoT” that you set up on GitHub?

A. When I started working in IoT in 2012, we discovered that there are many IoT devices in the market like TI, Raspberry Pi, ARM mbed, and others which led to people discussing about different protocols. To scale IoT devices, you need a generic platform where any device can be plugged in and it starts sending data. So, we generalised the platform at the backend. Moreover, we knew that if you connect the first TI sensor, then the same technique could be used to connect 1000 TI sensors as the protocols and interfaces will not change. So, we created recipes which are processes, that allowed people to do it once and then replicate it for the same set of ingredients. It includes a piece of code and instruction around it, and then we put it out for all developers.

A. I think the most interesting insight is that it’s possible to have more women participate in technical conferences. Yes, it might require a proactive and conscious effort from both the organizers as well women technologists to speak at such events. For instance at IoTShow, both you and the organizers took onus and responsibility to ensure 40% of your audience were women. It is a fantastic result to begin with.

Would you have some tips or advice for women in technology reading this interview?
Stay confident and keep the passion alive. Continue to innovate and talk about it. Write patents, blogs, papers, and talk about the work you do. There are a lot of Coursera courses that help you write better. As technical people, we should be writing more, and I feel that women should write and document more and that itself can have such an impact on your network. Become role models for other women and encourage them to build their external eminence. Lastly, we do get caught up in our routine work but don’t let it get in your way to achieve your aspirations.

“We Provide A Comprehensive And Field-Tested Training in Automation”