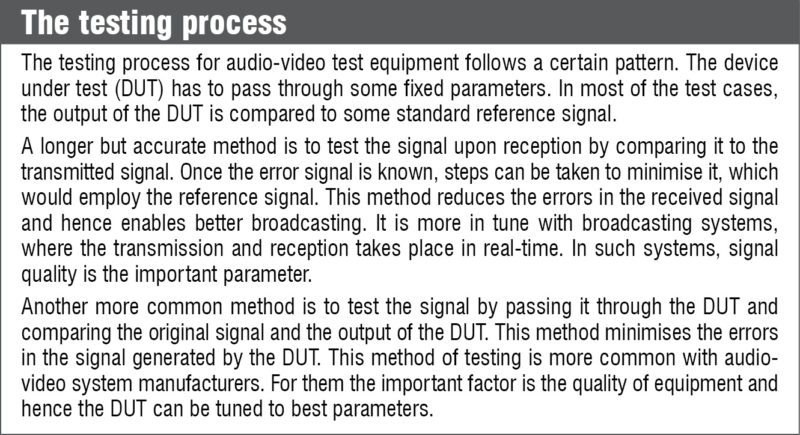 With high revenue generation, R&D for T&M video and audio analyser equipment is also very high-level. New product releases in this field were not frequent but have been technically sound. The last decade has seen a change in this pattern and several new releases and modifications to previous systems are happening on a more frequent basis.

“Now we have specific equipment catering to audio-video testing including signal generators and analysers being used by the broadcast industry. Tools catering to radio testing are being introduced as well,” says Gupta. He adds, “Today we have handheld tools in monitoring for field research equipped with GNSS, which provide signal conditions at different locations in real time.”

May 2015 saw DK-Technologies adding the DK T7 waveform monitor (WFM) to its portfolio. The T7 WFM is based on the T7++ motherboard and runs software from DK’s PTO800 video series. The unit operates in multi-channel metering, multi-set of loudness K-weighted relative to full scale (LKFS) loudness metering, signal test generator, all within a power consumption of 12 watts. “Essentially, it allows engineers to work step-wise through the entire audio clip, rather than having to go back and measure loudness from the top for every tweak,” says Kjems Hansen, product marketing director, DK-Technologies, in a press release. He continues, “The DK T7 was already the most comprehensive audio meter on the market, but with these new features it can deliver functionality that no other audio meter can offer.”
Another move is the touch-screen interface for the equipment. This makes the equipment interactive and easier to handle, although now precision is further required in handling. For many measurements the established analyser displays and controls are familiar and efficient.

However, the expanding functionality of signal analysers has led to a much deeper hard-key/soft-key menu structure and a dramatic expansion of display types.

In a latest addition to Keysight Technologies equipment, the X-series features a larger screen with multi-touch functionality similar to that of tablets. The measurement display and settings can be controlled by gestures such as single or double tapping to select a parameter or expand a window, dragging, pinching to zoom and scale displays, and press-and-hold to access context-sensitive selections. It includes an auto-tune feature to find and centre the likely signal of interest with a single touch.

The analyser is designed to make both major and minor upgrades practical, reducing the chances of equipment becoming obsolete. The upgradable features include real-time spectrum and vector signal analysis, frequency mask triggering, internal preamplifiers and external mixing. The analyser computer infrastructure can also be updated to include faster processors, larger or solid-state disk drives, and faster data interfaces. These upgrades are especially helpful for processor- and data-intensive applications such as digital demodulation and vector signal analysis.

Now let us take a look at some of the other launches in this segment.

The PHABRIX Qx provides generation and analysis tools on signals with up to 48Gbps payloads offering both video and audio support. Incorporating real-time 12G serial digital interface (SDI) physical layer analysis (eye and jitter) tool-set with automatic Society of Motion Picture & Television Engineers (SMPTE) compliance measurements, it provides comprehensive testing for both UHD TV1 and UHD TV2 infrastructures. Phil Adams, managing director, PHABRIX, commented, “Despite the technological challenges of making a true hybrid solution for SDI and IP infrastructure, the implementation of the Qx enables us to respond to the needs of customers now and in the future.”

A new RSA500 and RSA600 series of analysers from Tektronix offers frequency coverage from 9kHz to 7.5GHz with 40MHz acquisition bandwidth, a measurement dynamic range from -161dBm/Hz displayed average noise level and up to +30dBm maximum input. These USB based real-time spectrum analysers have four new models targeting design, spectrum management, wireless transmitter installation and maintenance applications. Using a USB 3.0 connection, the instruments can be operated via a desktop PC, laptop or tablet using a Signal Vu-PC software suite.

In an announcement, Adil Kaya, CEO, SIGOS said, “In the mobile telecommunications industry, video was always a topic; getting reliable quality and performance indicators for mobile video services has been a challenge. For over 400 network operators the SITE architecture, measurements and results are a highly trusted source to test and measure quality – adding video is just a logical consequence.” This can be used to conduct active testing and evaluation of adaptive bit rate (ABR) video streams in all major streaming formats, including Hypertext Transfer Protocol (HTTP) live streaming (HLS), HTTP dynamic streaming (HDS), Microsoft smooth streaming (MSS) and dynamic adaptive streaming over HTTP (DASH)—and across any video-capable access network technology, including 3G, LTE, LAN, DSL and Wi-Fi.

The major buyers of video and audio analyser equipment are broadcast service providers, R&D labs, product manufacturers and local ISP vendors. With the race for bigger and better displays and acoustics, manufacturers of smartphones and their accessories have become one of the biggest patrons of testing equipment. This might have led to a marginal price increase in the products for end users, but the quality has significantly improved, which is a minor trade-off.

Video and audio analyser equipments parameters has been in the market for quite some time now. And the boom in the media and broadcasting industry has given it a very wide market to cater to. The changes with every new launch are taking the audio/video quality to further new heights. We use technology on a daily basis, without wondering how much research goes into the making and proper maintenance of such systems. Next time you use your smartphone, you might wonder how balanced the acoustics are, or how the development team is able to efficiently integrate more than 400ppi pixel density in a small screen.

This Sensor Can Capture Colour As Seen By The Human Eye