Spurious AC components on the output of a DC supply are called ripple and noise, or periodic and random deviation. These terms are often used interchangeably.

Transient response. Transient response specifications indicate how quickly the output settles to a stable DC value after a change in load or settings. Most power supplies have a significant capacitance in parallel with their outputs to help deliver clean, steady DC. When this capacitance is placed in parallel with load resistance, a time constant results that varies with load impedance. Voltage transient response of programmable power supplies is given for three conditions: increasing load, increasing setting and decreasing setting.

Digital interface. In general, output voltage and current of a programmable supply is set most accurately, with the highest resolution, through its digital interface. DC supplies typically offer many different interfaces, including RS232, RS485, USB, GPIB, Modbus-TCP, Modbus-RTU and Ethernet.
In addition to hardware, most DC power supply companies also supply the software you need to easily integrate your DC supply into your system. For example, AMETEK supplies IVI drivers with each supply, and the supplies are programmed using standard SCPI commands. This makes system programming and system integration much simpler. 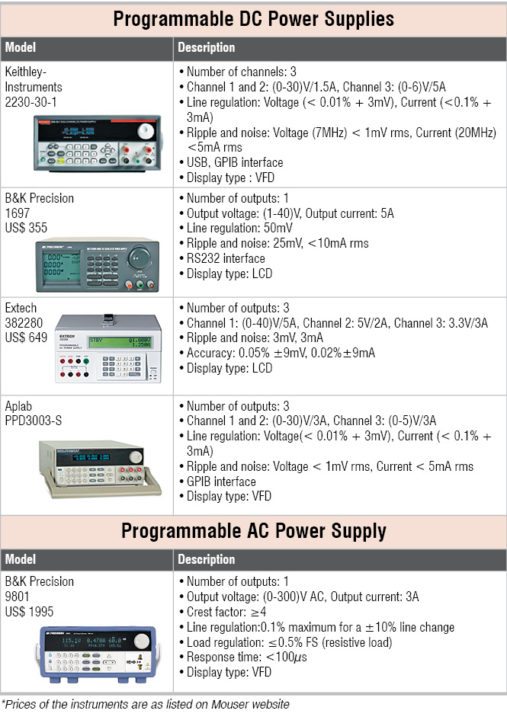 Programmable AC sources used in test applications must not only supply a stable source of AC but also simulate power-line disturbances and other non-ideal situations.

Today’s switching AC power sources offer great specifications and powerful waveform-generation capabilities that allow users to generate complex harmonic waveforms, transient waveforms and arbitrary waveforms more easily than ever before. Some can even provide both AC and DC outputs simultaneously and make measurements as well as provide power. This level of flexibility is making it easier to ensure that electronic products will work under adverse conditions.

Some common parameters to select a programmable DC power supply are given below:

Current requirements. To select an AC source you must consider the current your unit under test will draw. Be sure to include inrush and transient currents that may occur during intentional input voltage swings and during different modes of operation.

Worst-case input current. Rectifier-type power supplies and motors have inrush currents anywhere from two to ten times the nominal run current. AC power sources are designed to protect themselves from excessive loads current by either folding back voltage (current limiting) or shutting down output (current-limiting shutdown), and in many cases this is user-selectable.

Crest factor. Crest factor is the ratio of peak current amplitude to rms amplitude of AC. It is important to select an AC source with low impedance and high peak instantaneous current capability. Many AC sources can only support a crest factor of 1.414. With a crest factor rating of up to 3.25:1; AMETEK CSW series AC source, for example, can drive difficult non-linear loads with ease. This translates into driving a rectifier, for instance, that has a 52A peak current at 13A rms at a 120/208 three-phase output.

Power factor. Power factor of an AC electrical power system is defined as the ratio of the real power flowing to the load to the apparent power in the circuit. A load with a low power factor draws more current than a load with a high power factor for the same amount of useful power transferred.

Regulation and distortion. Load and line regulation should be tight and distortion low. Typically, quality AC sources will have a voltage accuracy of ±0.1 per cent and a maximum total harmonic distortion of no more than 0.25 per cent.