In this story, we explore the latest features and kinds of oscilloscopes that play an integral role in effectively testing designs today. We also learn how new technologies in oscilloscopes are enabling test and embedded engineers to design better

As an engineer, if you want to improve your design overall, effective testing is an integral part. However, it means possessing tools you can rely on and that can provide consistent results as per requirements.

Today, oscilloscopes come in numerous shapes and sizes—from as small as a wristwatch to pocket-sized and bench-top ones. They even have diverse bandwidths—from the entry-level 50MHz to the massive 100GHz! Let us explore the new technologies, innovations and breakthroughs in the oscilloscopes domain that help our engineers design better.

From analogue to digital
From simple signal capture to complex time-domain signal analysis, oscilloscopes come with salient and contrasting functionalities. Oscilloscope manufacturers have augmented the automated capabilities and portability factor so that designers can accomplish swiftly and get more authentic measurements for increased productivity. 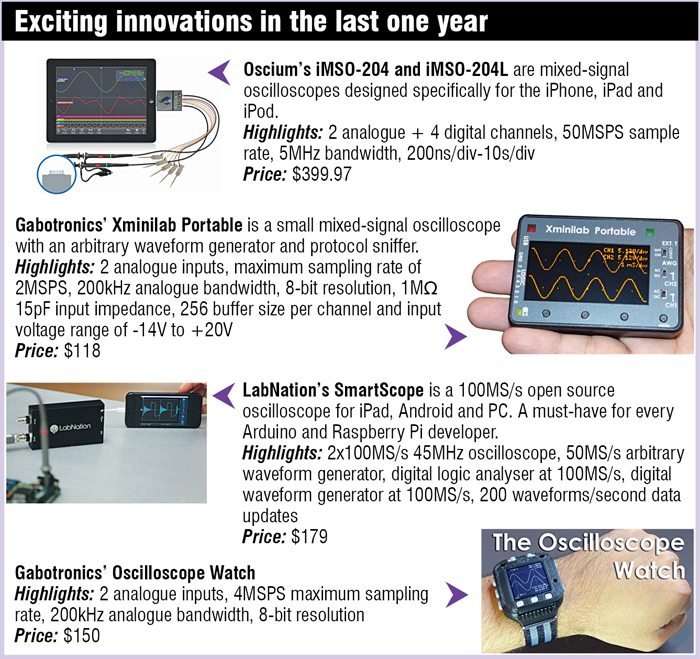 The invention of cathode ray tubes (CRTs) in the late 19th century was an important milestone for the birth of analogue oscilloscopes, and has changed the way of waveform representation, believes Srinivasa Appalla, manager-product support & application, Rohde & Schwarz. However, he says, “The technological advancements in electronic designs have put new requirements on signal analysis which are not met by analogue scopes. Digital oscilloscopes, introduced in the 80s, are dominating the market now because of the ability of digital signal processing, and respective analysis and documentation.”

Sumit Sharma, marketing manager-India, Good Will Instrument Co. Ltd. too believes, that with the rapid advancement of technology, the oscilloscope market has also been shifting from conventional analogue oscilloscopes towards digital storage oscilloscopes (DSOs). He says, “In contrast to analogue oscilloscopes, the major function of a DSO is to not only convert signals from analogue to digital but also store testing data, allow remote control and transmission of data through various interfaces.” But, he also believes, “Despite the strengths of DSOs, analogue oscilloscopes still play an important role of providing real-time signals and waveform display.”

Mixed-signal and mixed-domain
“As oscilloscopes have evolved from analogue to digital and from mixed-signal oscilloscopes to mixed-domain oscilloscopes, they have become even more valuable tools for analysing system performance or troubleshooting problems,” says Pamela Aparo, marketing manager-electronic test & measurement, Analog Devices Inc.

Embedded system designers require advanced testing capabilities to resolve their design issues, so mixed-signal oscilloscopes (MSOs) emerged in the beginning of 2000, informs Sharma. He says, “There has been a growing need for detecting digital signals which are usually presented by two discrete voltage levels.” A logic analyser, which is the best fit for such digital-signal measurements, has the benefit of multiple-channel input measurements, usually limited to two or four channels in oscilloscopes. He adds, “Nowadays, some system designers not only need an MSO but also an instrument which can afford to do frequency- and time-domain analysis simultaneously. So, a mixed-domain oscilloscope (MDO) is the latest trend.” 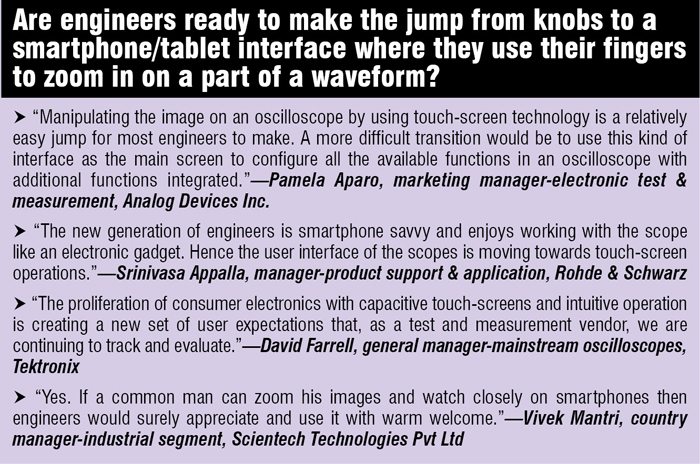 The continuously-evolving integration level of embedded designs drives further feature integration into oscilloscopes. Appala says, “Additional digital channels, as part of mixed-signal options, protocol-specific trigger and decode options are a few examples. The key requirement is a synchronised operation of such features for true system-level debugging.”

In the analogue to digital era, a significant number of digital designs came onto the analogue board, thus MSOs came to light about ten years ago. “The trend has evolved since, and mixed-domain oscilloscopes came into existence with Tektronix leading the charge. Today, mixed domain has moved to another level with the inclusion of wireless RF signals,” says David Farrell, general manager-mainstream oscilloscopes, Tektronix. He adds, “Analogue, digital and now RF signals are coming together to the embedded domain and creating significant changes on how work is done in designs houses and research centres, specifically with respect to analysing those signals in as short a time as possible.”

On a similar note, Aparo says, “Mixed-domain oscilloscopes offer similar benefits as mixed-signal oscilloscopes when an engineer needs to analyse signals in both the time domain and frequency domain—and these are useful in looking for problems that are caused by phase instability or phase offsets.”