There are certain instruments that you are bound to find in an electronics lab. A signal generator is one such essential test and measurement (T&M) device; others being a multimeter, power supply, an oscilloscope and so on. Let us go into the details of what is new in this commonly-used instrument.

We have observed that the classification of signal, function and waveform generators is often misunderstood. Let us clarify that first before moving forward.

AWGs. These can create complex signals specified by users; these could be periodic or non-periodic and of any possible shape. The bandwidth of AWGs is usually limited compared to function generators due to the complex techniques used to generate these signals.

Sophisticated signal generators are also divided into the following categories based on their application:

Audio frequency (AF) signal generators. These are optimised for use in AF range of 20Hz to 20kHz and above, and are used for measuring distortion and checking frequency response in audio equipment.

Radio frequency (RF) signal generators. These are used to generate RF signals and are generally used in design and test applications in the RF range, particularly telecommunications.

Pulse generators. These produce output in the form of pulses of logic 1s and logic 0s with different analogue characteristics such as rise time, fall time and delays.

When these create mere pulses without controllable parameters, these are known as logic generators. These are used to generate pulses that stimulate logic circuits.

Customisation. The instrument can be customised based on application requirements.

Compactness. Developers are trying to shrink the size of the device without compromising on the effectiveness of measurements. 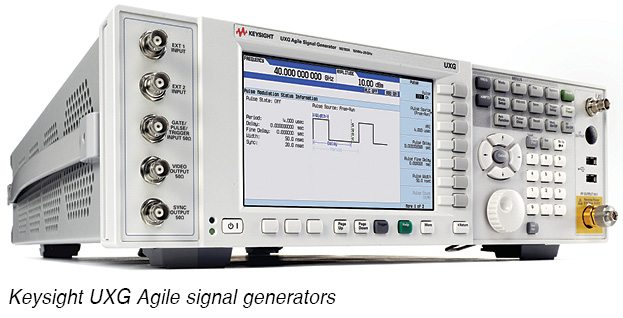 USB interfaces. These make the instrument compatible with various devices to be tested and enable seamless transfer of data.

What more has come up since then?

Newer standards and modular upgrade options. The signal generator market has not witnessed revolutionary changes in the past few years. Hence, the release of new models or upgraded versions of particular instruments depend mainly on the changes brought about in testing standards.

Other changes seen in new models are widened specification range and enhancement of existing features. With the introduction of modular platforms, the upgradation of an instrument has become much easier for both manufacturers and users. 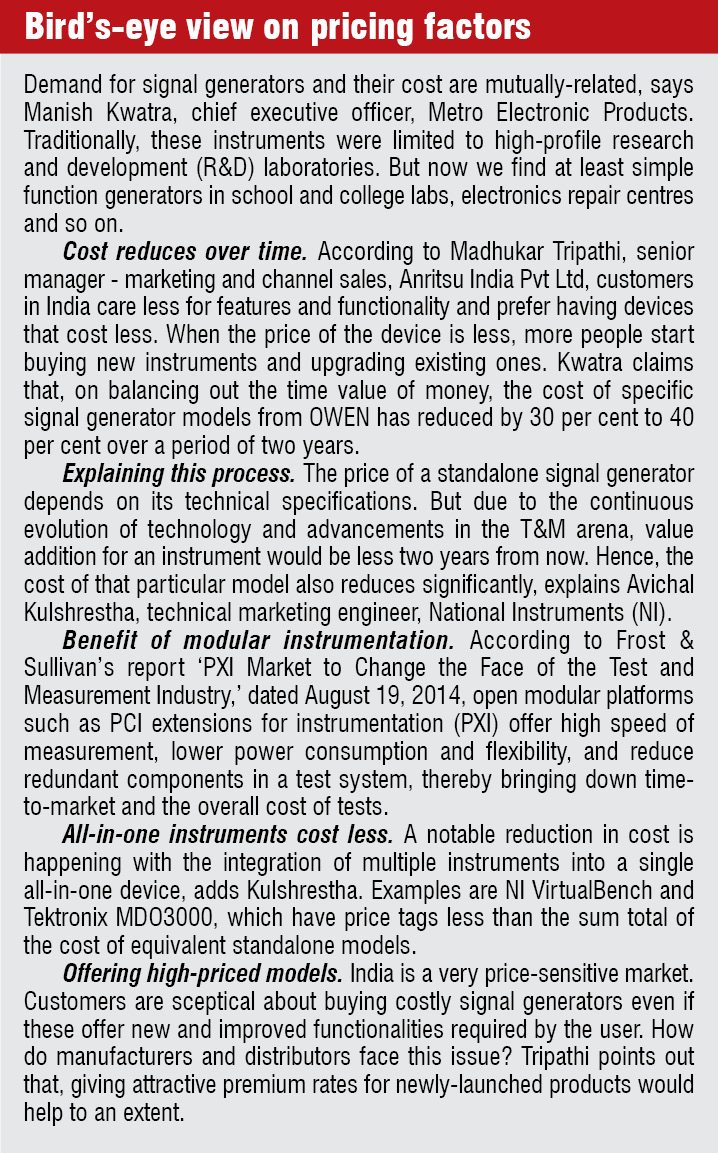 FPGA onboard. There are applications where data is required to be processed at a very high rate without any lag or loss of information. Field programmable gate array (FPGA) is a hardware based processor that processes incoming data on a point-to-point basis, unlike software based processing that requires buffering. This means, the user gets immediate response and high processing frequency as there is no buffer time and overhead time involved. Such FPGA processors are used in many modular platforms available these days. 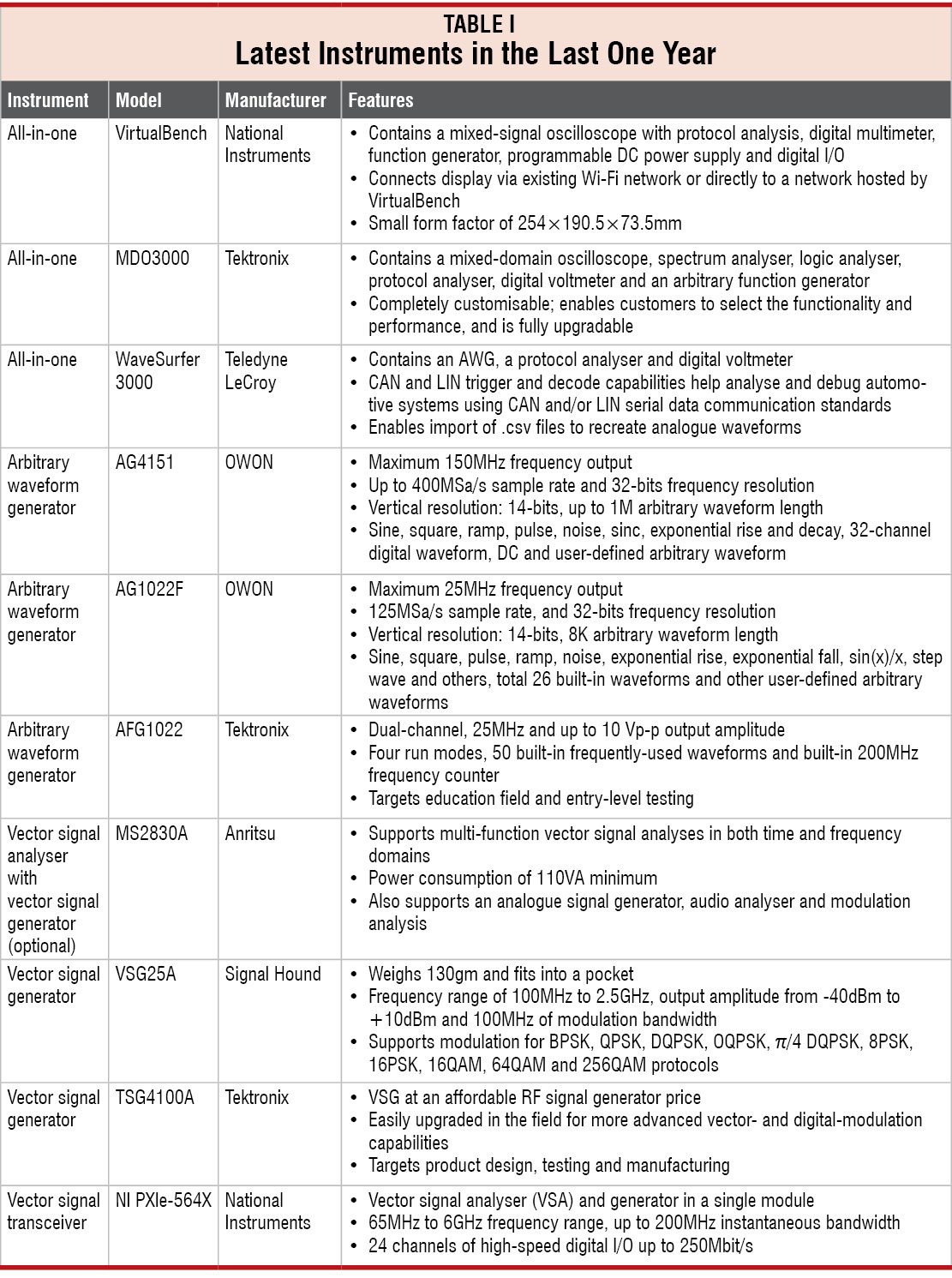 Education. Every electronics lab in an educational institution has at least one simple, low-frequency function generator for performing basic electronics experiments. With a large number of engineering colleges being set up every year, academia is one area where signal generators are being sold in good numbers. These usually generate the basic sine, square and triangular waves at a frequency that ranges from a few hertz to a few gigahertz. The user interface (UI) for these academia-focused instruments is simple to understand and operate.

Defence R&D. The purchase of high-frequency signal generators that can create custom signals generally comes from defence and aerospace development laboratories such as Defence Research & Development Organisation (DRDO). They also use pulse-signal generators for radar application. 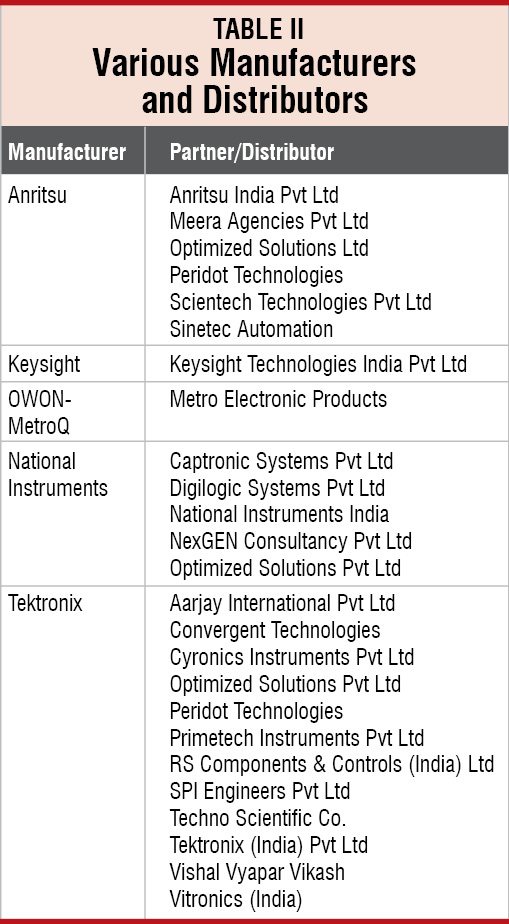 Semiconductor. Many semiconductor firms such as Freescale, Intel, Qualcomm and Texas Instruments perform their chip design validation in India. Whether to check logic high and logic low of a chip, or to analyse the equivalent analogue output for a digital input, a signal generator is important.

Purchase of signal generators is notable in telecom (due to the continuously-evolving communication standards), light emitting diode (LED) lights and drivers manufacturing, and electronic device repair shops, among others.

Influenced by indigenous manufacturing
Signal generators are instruments that have not evolved much over the years, except for the introduction of modular platforms. Though customers working on advanced applications opt for a broader range of parameters or integrated instruments, basic models of signal generators are still in demand.

With the launch of ‘Make in India’ campaign and push by central and state governments for indigenous manufacturing, manufacturers and distributors are hoping that five years down the line, the signal generator market would see significant growth in revenue.