3D Printing: The Technology That Changes Everything

Ever since key 3D printing patents expired earlier this year, there has been media frenzy predicting a bigger printing boom about to happen. Let's take a look at the upcoming technologies for 3D printing, and how these could change our world -- Sneha Ambastha

Carbon fibre. Carbon fibre can usually be incorporated into objects only by hand, so working with them is time consuming and proves expensive too. 3D printers use carbon fibre material in the form of composites, which cuts down waste by providing the exact physical length needed without any requirement to trim.

Light-directed electrophoretic deposition (EPD). EPD is an old technology that is unable to allow selective depositions at certain spots. A combination of photoconductive electrodes with a DC electric field allows spot deposition to produce accurate composites in a process called light-directed EPD. EPD being a faster deposition technique, the addition of light to it allows the creation of accurate void areas, thus helping the engineers to come up with all types of designs in a shorter span of time.

The interesting point in this technology is that it uses laser-cut aluminium mask, which is likely to be replaced soon by a digitally-projected mask that would make it a completely automated deposition system. Being a resin-type 3D printing system, it provides better finish to the object being printed. 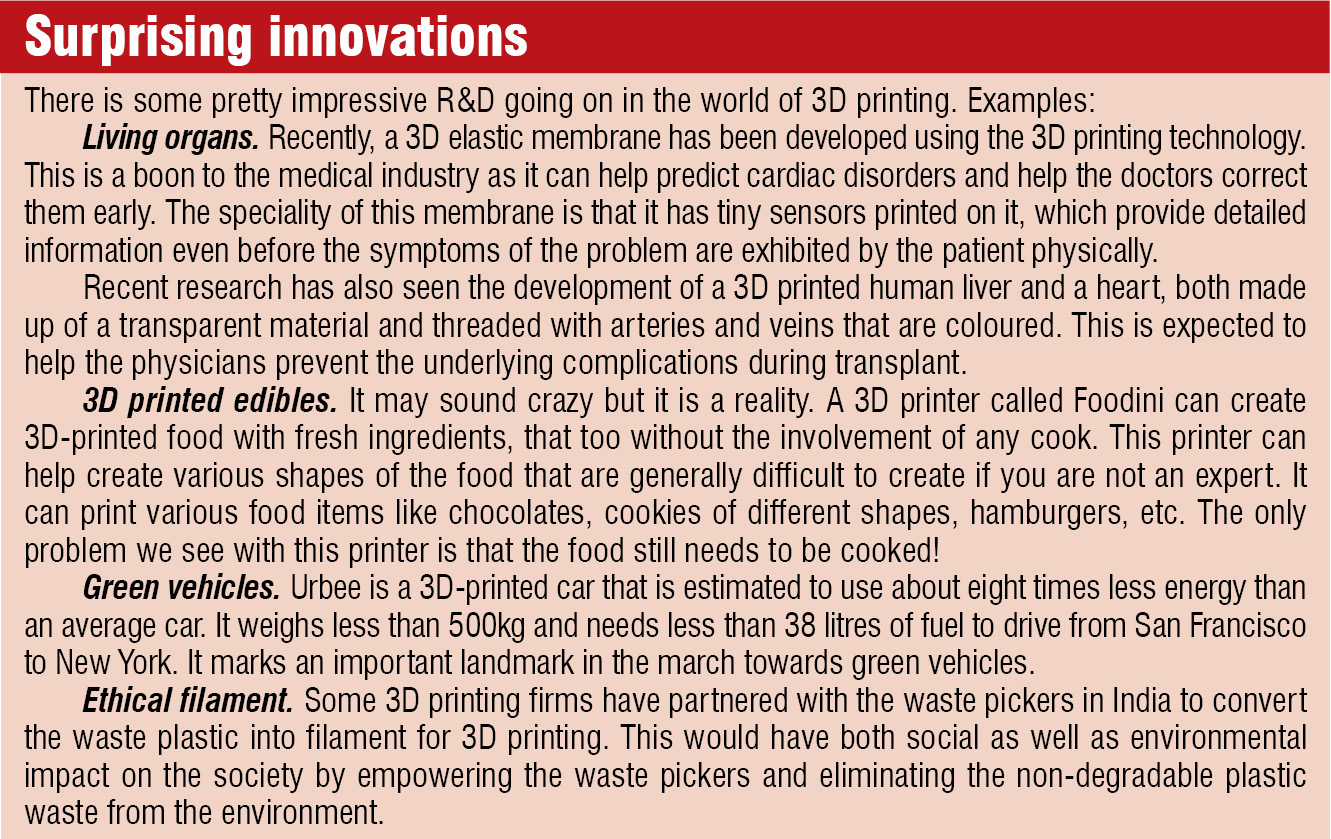 Biomimicry. Biomimicry is a new science that studies nature’s models and then uses these designs and processes to solve human problems. 3D printers can be a great boon in making products similar to those found in nature. The best thing about this technology is that the final products can get different colours without any extra cartridge attachment to the 3D printers. This lets us create new prototypes of different colours and shapes without any extra tools and cost.

Sensor and data analysis in 3D printing. Sensors are the key source for inspection in data analysis. They play an important role in improving the additive manufacturing process in 3D printing. If we take the example of selective layer sintering (SLS), the sensor would allow the engineers to identify the optimal coupling between the powders and the laser by helping them to analyse the right amount of energy transferred into the powder layer. It helps to prevent overheating during the process.

New 3D printers in the market
The 3D printing industry can be seen as a growing industry with developments being made at every stage. No wonder newer technologies are emerging. But there is requirement of new 3D printers that can be used for multiple platforms with multiple filaments.

There is a 3D printer MarkOne, created by a start up named MarkForged, at Boston, which can print carbon fibre. As mentioned earlier, though carbon fibre can be used to make things manually, it is tough to work with and time consuming as well. MarkOne can make working with carbon fibres easy and less time consuming, without the requirement to trim the object as only the required amount of carbon fibre is laid down. Thus a strong object can be created in less time with least effort. This printer not only works with carbon fibre but also has the ability to work with other types of composites like nylon, fiberglass and PLA (polylactic acid).

Then there is anther printer called Duplicator 4, which is an assembled dual-extrusion 3D printer available in India. Although it is capable enough to be compared with MakerBot’s Replicator 2x, it is almost one third in price. It can 3D print in two colours and also has the capability to use one extruder to print the actual object and the other to print the dissolvable material. It uses the FDM technology and can use both plastics and composites for the filament. Karan says, “Duplicator 4 is a blatant copy, a clone or a duplicate of MakerBot design made in china and imported by some people in India.”

Daniel Hutchison, co-founder, HYREL LLC says, “We have come up with Mk1 filament extruder and EMO-25 extruder, where EMO-25 can print precious-metal clay on all platforms and uses most of the emulsified filaments like PMC and silicon. “Biotz is introducing a disruptive portable 3D printer which would be affordable for each and every home by 2015,” says Paul.

New technologies require new tools, software and training to support it. Some companies like Redd Robotics, Cycloid System and Kurukshetra are organising workshops in India to help people understand the concept of 3D printing and to encourage this technology for the growth of the Indian market. Leading firm like Ultimatum and SAP Labs are working with experts in this industry to explore new opportunities for on-demand development of new technologies and software anywhere and anytime.

The software plays an important role in the designing and development before actual printing takes place. The 3D models designed are first verified and tested to ensure that the final product to be printed would meet the requirements of the customers. Karan says, “The major supplier of 3D printing software is Autodesk with their key software being AutoCAD. They are also releasing a number of free software related to 3D printing, one such example being 123D Design that is used for 3D modelling.”

Then there are other software like Meshmixer that allows the designers to mix and match, stamp, script and paint one’s own 3D printed designs. The user-friendly online tool like TinkerCAD allows the designers to convert their ideas into a CAD models for 3D printing. Harshad Karmarkar, research analyst, Patent insight Pro says, “Although CAD/CAM software forms a base for 3D printing, companies have developed their own printers for specific applications. For example, 3D Systems has come up with a printer which prints on pizza.”

Varying price
The main focus of the Indian market is low-priced 3D printers. Even though the consumers are apprehensive about quality, the main concern of the market is to ensure that the low-priced 3D printers meet the customers’ requirement. Daniel Hutchison says, “The current price trends that we can see in the FDM or FFF market have been more towards making the cheapest printer possible for the consumer-level marketplace. SL has been price trending the same way although SLS is still an enigma at the moment.” He opines, “It will be interesting to see how HP and other large companies would affect the 3D printing marketplace when they make their entrance in the near future.”

The author is a technology journalist at EFY