Once we start reducing the size of the GNSS receiver, we have to keep in mind several factors. For example, when we have several transistors within a space of less than a centimeter, interference from adjoining transmitters becomes an issue at some point. Magnetization, current induced due to magnetization, eddy current and hysteresis are factors that rising from the tracks running around. Requirement of a proper heat-sink is also a major issue inside the chip.

Now, these devices have to be economically viable to make but also be affordable. So cost-reduction measures include low-cost oscillators and low-cost antennae for receivers.

“As per the GNSS market report 2014 of European GNSS agency, around the globe 3.6 billion GNSS devices are in use. By 2019, this is forecast to increase to over seven billion,” says M.N. Vidyashankar, president, IESA.

Due to the range of applications, this seems to be a very satisfying number for manufacturing companies. We have GNSS embedded in smart devices, digital cameras, portable equipment, fitness gear and many more. 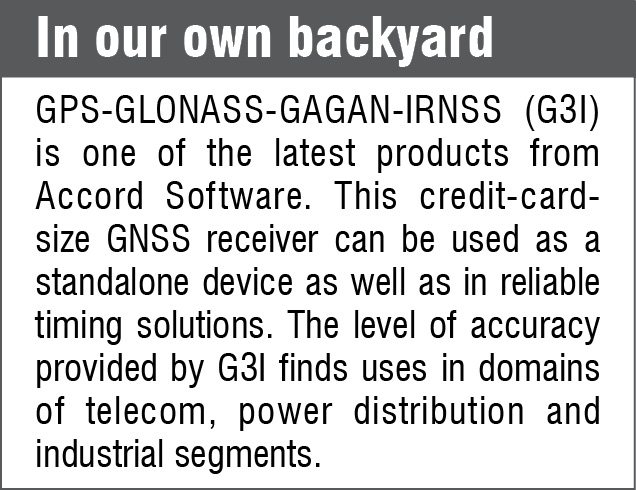 Vidyashankar adds, “GNSS is also used in various platforms that are used in automobiles and air navigation systems to display moving maps, information about location, speed, direction and nearby streets. Similarly, heavy equipment employ GNSS in construction, mining and precision agriculture. Cyclists often use GNSS in racing and touring. Spacecraft also use GNSS as a navigational tool.” A very wide market indeed!

Due to a large market and multiple GNSS chip providers, we have newer and better products coming out on a regular basis. These newer products, either in the form of firmware changes or hardware improvements, help in improving the current guidance systems by achieving certain changes.

In a recent release, VN-360 GPS-compass heading-and-position sensor was unveiled by VectorNav Technologies. It is an OEM GPS-compass module that provides an accurate, true North-heading solution for system integrator seeking a reliable alternative to magnetic based sensors. It is a miniature, cost-effective GPS based alternative unaffected by magnetic disturbances and changes to the magnetic environment.

Incorporating two on-board GNSS receivers, VN-360 calculates the relative position between its two GNSS antennae to derive a heading solution. This is an order of magnitude more accurate than a magnetic compass. It supports a variety of GNSS antennae that can be mounted on the host platform with a separation distance anywhere from a few centimeters to several meters.

“VN-360 is like no other product on the market, in that it provides a cost-effective solution for the difficult challenge of obtaining an accurate and reliable heading solution,” stated John Brashear, president, VectorNav Technologies, in a recent press release.

He added, “VectorNav’s GPS-Compass technology marks a turning point in the way we approach heading measurement and will improve the capabilities and performance of a variety of next-generation manned and unmanned systems.”

Fancy an antenna, anyone

Acutime 360 from Trimble is a recently launched product. It is a smart antenna with an integrated multi-GNSS receiver for high-accuracy and precise-timing applications. It includes support for GPS, GLONASS and BeiDou, and is Galileo-ready.

Acutime 360 has a tracking sensitivity of -160dBm and an acquisition sensitivity of -148dBm. It can operate in extreme temperatures (-40°C to +85°C) and hostile radio frequency environments typically encountered at wireless network transmitter sites, with a power input of less than one watt.

Measuring merely 12.2 mm x 16 mm x 2.4 mm, NEO-M8P is another very small, high-precision module by U-Blox. The GNSS real-time kinematic module is based on GPS and GLONASS satellite based navigation systems. Real-time kinematic algorithms are pre-integrated into the module. As a result, the size and weight are significantly reduced and power consumption is five times lower than existing solutions.

In a recent press release, Daniel Ammann, executive director positioning and co-founder of U-Blox, said, “NEO-M8P lowers the barriers for innovative companies looking to develop equipment that need centimeter-level accuracy in many markets and applications such as unmanned aerial vehicles.”

With a firmware upgrade by U-Blox, for its earlier M8 module, U-Blox M8 FW 3.01 now also supports Galileo, in addition to GPS, GLONASS, BeiDou, QZSS and SBAS. It can track up to three constellations concurrently. It makes use of all SBAS and QZSS augmentation systems at the same time.

In addition, with FW 3.01, U-Blox M8 now boasts of BeiDou acquisition sensitivity and adds support to Indian GAGAN augmentation system. According to a recent release, “Security mechanisms have also been embedded in FW 3.01. An anti-spoofing feature detects fake GNSS signals and a message integrity protection system prevents man-in-the-middle attacks. Another security function detects and suppresses jamming. A welcome feature of FW 3.01 is the ten per cent power reduction compared to earlier firmware versions.”

All GNSS chip-sets can easily be employed in handheld devices like smartphones, tablets and palmtops. But wearable application requires further miniaturization. Smartwatches have been the talk of town; selling like hot cakes, these essentially are mini computer systems.

With features like receiving and making phone calls, smartwatches have become a scaled-down version of your mobile phone. For these devices, we do not necessarily need accuracy of up to centimeters; a few meters is fine. Hence, GNSS chip-sets supporting a single satellite system is fine when it comes to wearable.

“Asset tracking is an area where we have seen a lot of inquiries. Chips used in these wearable would usually be scaled-down versions of those used in vehicle tracking. In such cases, you could just use a GPS module without additional constellations as these really do not need that kind of accuracy,” says Gulati.

With the boom in wearable, miniaturization has been taken to the next level. Very soon we might have GNSS chip-sets smaller than a nail with tracking accuracy in centimeters. This would give a huge burst to GNSS-aided missile-guidance systems. The irony of such a helpful guidance system is that, it is growing by reducing the size.