Hyper-Converged Infrastructure: Get Ready for the Cloud Era

11. During a recent talk, Dell EMC European chief technology officer for converged and hyper-converged infrastructure, Nigel Moulton, said that “mission-critical applications live best in converged infrastructures.” He justified his view by saying that many mission-critical applications such as ERP are architected to rely on the underlying hardware (in the storage area network) for encryption, replication and high availability. In HCI on the other hand, many of these things come from the software stack. Instead of looking at the move to HCI as all-or-none, he suggested that organisations take a practical look at it. If an application can work on HCI, companies must make the move as and when their existing hardware reaches end of life. The rest can remain on traditional hardware or converged systems. He also added that by the end of this year, feature-sets of traditional hardware, converged and hyper-converged will align and it will be difficult to even see the differences. 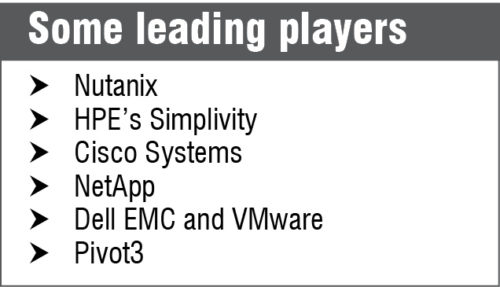 In the beginning, there was just IT infrastructure, no virtualisation. Enterprises spent a lot on buying the best IT components for each function and spent even more on people to implement and manage these silos of technology.

Then, there came virtualisation, which greatly optimised the way resources were shared and used without wastage by multiple departments or functions.

In the last decade, we have seen converged infrastructure (CI) emerging as a popular option. In CI, server, storage and networking hardware are delivered as a single rack, sold as a single product, pre-tested and validated by the vendor. The system may include software to easily manage hardware components and virtual machines (VMs), or support third-party hypervisors like VMware vSphere, Microsoft Hyper-V or KVM. As far as the customer is concerned, CI is convenient because there is just a single point of contact and a single bill. Chris Evans, a UK-based consultant in virtualisation and cloud technologies, describes it beautifully and humorously in one of his blogs, where he says that in CI there is just one throat to choke!

While this single product stack approach is ideal for most enterprises, there are some who want to do it themselves. This could be because they need heavy customisation or have some healthy legacy infrastructure that they do not want to discard. Given the required time and resources, one can also build a CI out of reference architectures. Here, the vendor gives you the reference architecture, which is something like an instruction manual that tells which supplier platforms can work together well and in what ways. So, the vendor tests, validates and certifies the interoperability of products and platforms, giving you more than one option to choose from. Thereafter you can procure the resources and put them together to work as a CI.

Enter HCI. What makes the latest technology ‘hyper-converged’ is that it brings together a variety of technologies without being vendor-agnostic. Here, multiple off-the-shelf data centre components are brought together below a hypervisor. Along with the hardware, HCI also packages the server and storage virtualisation features. Term ‘hyper’ also stems from the fact that the hypervisor is more tightly integrated into a hyper-converged infrastructure than a converged one. In a hyper-converged infrastructure, all key data centre functions run as software on the hypervisor.

The physical form of an HCI appliance is the server or node that includes a processor, memory and storage. Each node has individual storage resources, which improves resilience of the system. A hypervisor or a virtual machine running on the node delivers storage services seamlessly, hiding all complexity from the administrator. Much of the traffic between internal VMs also flows over software-based networking in the hypervisor. HCI systems usually come with features like data de-duplication, compression, data protection, snapshots, wide-area network optimisation, backup and disaster recovery options.

Deploying an HCI appliance is a simple plug-and-play procedure. You just add a node and start using it. There is no complex configuration involved. Scaling is also easy because you can add nodes on the go, as and when required. This makes it a good option for SMEs.

Broadly speaking, CI can be considered a hardware-focused approach, while HCI is largely or entirely software-defined. CI works better in some scenarios, while HCI works for others. Some enterprises might have a mix of traditional, converged and hyper-converged infrastructure. The common thumb rule today is that when organisations don’t have a big IT management team and want to invest only in a phased manner, HCI is an ideal option. They can add nodes gradually depending on their needs and manage the infrastructure with practically no knowledge of server, storage or network management. However, they lose the option of choosing specific storage or server products and have to settle for what their vendor offers. For organisations with more critical applications that require greater control over configuration, a converged system is better. CI offers more choice and control, but users might have to purchase the software themselves, which means more time, money and effort.