Following the phenomenal and unexpected success of 2G, there was heightened anticipation of what 3G would bring, but 3G’s contribution to date is a very mixed bag. On a technical level, 3G met the increased single-user data rates mandated by IMT-2000 requirements, but the uptake of much-hyped 3G services such as video telephony has been poor. This is why 3G subscriptions are just over seven per cent of 2G subscriptions, and many of these are primarily using telephony and basic messaging rather than 3G-specific data services.

Real uptake of data services did not start until the introduction of the so-called 3.5G packet based data services, like high-speed downlink packet access (HSDPA) on universal mobile telecommunication system (UMTS) and evolution data optimised (1xEV-DO) on CDMA2000. Dedicated data-only devices with flat-rate tariffs (for example, USB dongles used with laptops) are showing strong growth in some markets with good performance, at least for early adopters. 3G’s impact is currently much less significant than the step from 1G to 2G.

Pre-4G technologies, such as mobile worldwide inter-operability for microwave access (WiMAX) and first-release 3G long-term evolution (LTE), have been available in the market since 2006 and 2009, respectively. Early WiMAX versions and first-release LTE captured the attention of wireless service provider giants around the world, but their market penetration is yet to be seen and their fate is not very clear.

4G refers to the fourth generation of mobile wireless standards. It is a successor to 3G and 2G families of standards. The expectation for 4G technology is basically the high-quality audio/video streaming over end-to-end Internet protocol.

IMT-Advanced requirements
ITU-R for IMT-Advanced has set a specific level of minimum performance that each proposed technology needs to achieve to fulfill the objectives of IMT-Advanced. These requirements are demonstrated, at a glance, in Table I.

IMT-Advanced (4G) candidate technologies
Based on the thresholds set by ITU-R for IMT-Advanced, none of the wireless technologies at present, including LTE, high-speed packet access + (HSPA+) and WiMAX can be considered as 4G technology.

For HSPA+, main limitations are spectral efficiency, bandwidth and latency. On the latency front, HSPA+ cuts the user plane latency dramatically but it is still measured to be around 30ms to 40ms (round-trip delay) for best networks (refer Table I for comparison).

WiMAX is fairly comparable to LTE in terms of spectral efficiency and delay capabilities since these share the same multiple access scheme and use similar modulation and coding scheme. Similar to LTE, WiMAX also uses 2×2 MIMO. WiMAX latency profile is similar to LTE due to flatter network compared to HSPA+, but round trip delays ranging between 100ms and 140ms put WiMAX quite far from IMT-Advanced targets.

HSPA+ is being expanded to allow 40MHz channelisation with 4×4 MIMO capabilities that allows it to achieve 16.8bit/s/Hz peak spectral efficiency. Details about how to achieve other targets are all part of release 11, which is expected to be completed very soon.

LTE is closer to 4G thresholds compared to HSPA+ and was formally submitted by the 3GPP organisation. Primarily, LTE was designed to incorporate MIMO from the start. If 4×4 MIMO is implemented in the terminal form factor to have an LTE-category five devices, then using LTE-Advanced that allows 40MHz to 100MHz channelisation will bring true 4G capabilities. 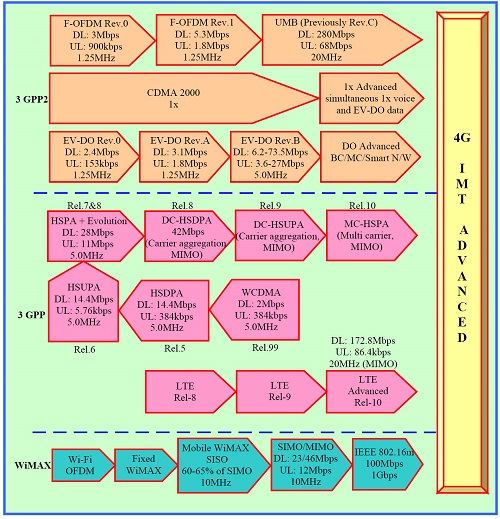 LTE-Advanced is part of 3GPP release 10 and is essentially an enhancement to the existing LTE network. This upgrade path makes it more cost-effective for vendors to offer LTE and then upgrade to LTE-Advanced. LTE-Advanced (release 10) has been formally submitted by 3GPP in fall 2009 to achieve high data rates of 1Gbps peak download and 500Mbps peak upload, and it is expected to be released soon.

On WiMAX front, IEEE 802.16m or wireless MAN-Advanced evolution of 802.16e (mobile WiMAX) is under development, with the objective to fulfil the IMT-Advanced criteria of 1Gbps for stationary reception and 100Mbps for mobile reception.

Some other technologies like 1x-Advanced, DO-Advanced and ultra mobile broadband (UMB) are also rapidly progressing to meet and surpass the IMT-Advanced requirements. Following a detailed evaluation against stringent technical and operational criteria, ITU has determined that LTE-Advanced and IEEE 802.16m/wireless MAN-Advanced should be accorded the official designation of IMT-Advanced, which is considered as 4G.

In a nutshell
The wonder technology 4G is expected to cover the data-rate deficiency in previous generations. It is also aimed to achieve quality of services including voice chat, video calls, MMS, HDTV and voice-over Internet protocol (VoIP). This technology aims to provide 100Mbps data rate for moving users and 1Gbps for stationary users so that they can enjoy uninterrupted connectivity with high speed anywhere they go.

Flawless connectivity and international roaming across innumerable networks of the world is its next target. It is an all-IP-switched network and several working groups propose that it should offer an open Internet protocol. The technology components being considered for 4G include carrier aggregation, advanced access schemes, enhanced multiple antenna transmission, relaying and repeater solutions, among others. In addition to these solutions to enhance coverage and cell edge data rates, an evolution of inter-cell interference coordination in the form of coordinated multi-point transmission/reception is yet another technology to enhance the 4G network performance.

4G candidate technologies are LTE-Advanced, wireless MAN-Advanced or mobile WiMAX 802.16m, 1x-Advanced, UMB, DO Advanced and MC-HSPA. Recently, ITU has determined that LTE-Advanced and wireless MAN-Advanced should be accorded the official designation of 4G. Capabilities of IMT-Advanced/4G systems are being continuously enhanced in line with user trends and technology developments.