British power technology company Intelligent Energy has developed an iPhone 6 prototype with a built-in hydrogen fuel cell that supports hydrogen cartridges delivering up to a week’s worth of battery life. It is also poised for the first major commercial deployment of this technology in India.

The potential benefit of fuel cell technology to engineers is clear: devices as big as smartphones could go a week on a single cartridge of hydrogen-releasing powder. The question Intelligent Energy and very likely Apple are now grappling with is how much they would be willing to pay for freedom from the plug socket.

The patented fuel cell system, reportedly poised for its first major commercial deployment in cell towers across India over the next few weeks, creates electricity based on the chemical reaction of combining hydrogen and oxygen, which produces only small amounts of water vapor and heat as waste.

Intelligent Energy also introduced a hydrogen-powered iPhone charger called Upp based on the same technology last year, but its latest breakthrough has seen it fit the fuel cell portion of the technology alongside an iPhone 6 battery pack without altering the size or shape of the smartphone.

To our knowledge this has never been done before. We have now managed to make a fuel cell so thin we can fit it to the existing chassis without alterations and retaining the rechargeable battery. This is a major step because if you are moving to a new technology you have to give people a path they are comfortable with.

The only cosmetic difference on the iPhone 6 prototype is the addition of rear vents allowing a small amount of water vapor to escape. The Telegraph reports the device it saw at the company’s Loughborough, United Kingdom headquarters also had a modified headphone socket for refuelling hydrogen gas, although likely only because it was a prototype.

Intelligent Energy plans to sell a disposable cartridge that will attach to the bottom of a smartphone and provide enough hydrogen-releasing powder “for a week of normal use,” and the company’s corporate finance chief Mark Lawson-Statham vaguely mentions having a “partner” on board — speculated to be Apple, although both companies declined to comment as expected. 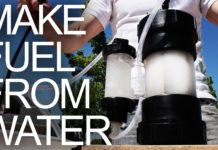 How To: Water To Fuel Converter (Oxy-Hydrogen generator)

“Whenever There Is A Mechanical Movement That Has To Be Counted...