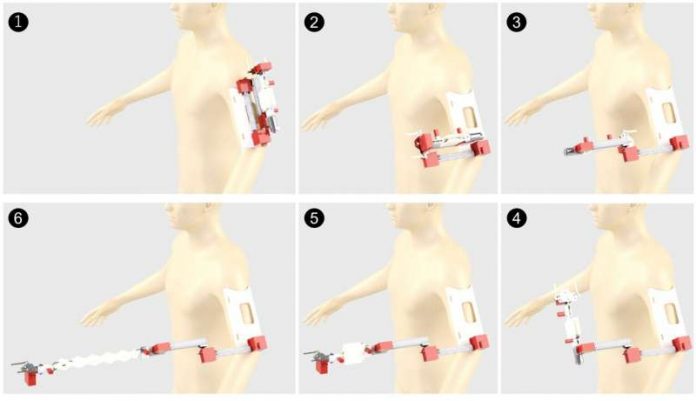 Researchers create a compact robotic limb that could support humans during a variety of everyday tasks.

Researchers have been interested in human augmentation technologies as they enhance human capabilities with information and robotics approaches. Now, researchers at Japan Advanced Institute of Science and Technology and University of Tokyo have developed a compact robotic limb that could support humans during a variety of everyday tasks.

Most previously developed robotic limbs are quite heavy and acquire a lot of space. In their preprint published in arXiv, they proposed a compact robotic limb that can fold into small volume without the interrupt to the wears’ daily activities, especially for long-time usage.

The newly developed robotic arms, AugLimb, can transform approximately 2.5 times longer than a human’s average forearm length. It has seven degrees of freedom, and can be easily fabricated and implemented using 3D printers and motors.

“The most notable achievement of our study is that we were able to develop a robotic arm that is compact and can reach across long distances while in use,” Haoran Xie, one of the researchers who carried out the study, said. “We believe that AugLimb will be as popular as smart watches in the near future, as anyone from an elder to a child can comfortably wear it for the whole day.”

The robotic arm is till in the prototype stage. The researchers plan to continue testing it and improving its capabilities, to make it increasingly effective and commercially viable.

“In our future studies, we would like to explore effective ways to control AugLimb with biological information, such as electromyography (EMG) signals from muscles or electroencephalogram (EEG) techniques that detect brain waves,” Xie said. “We also plan to use deep learning to improve the analysis of these signals.”