Metal X is expected to be available in markets later this year. The company plans to continue working on ADAM technology in the future, incorporating it into a line-up of even more affordable and scalable printers, with the ‘blade server’ concept for volume manufacturing where printers on a rack will scale up or down to meet customers’ needs, as they do in current server farms.

General Electric is working towards building the world’s largest laser-powered 3D printer to make parts out of metal powder. This printer is bound to be useful for automotive, power, oil and gas, and other sectors. The company plans to showcase a prototype of the printer, called Atlas, in November this year. The printer can print objects up to 1m in two directions (length and width) using titanium, aluminium and other metals. So, automotive manufacturers would be able to manufacture an entire engine block for a car or truck. The production version is likely to be launched next year.

The Prodways Group, a French player, has also announced a new 3D metal printing technology called Rapid Additive Forging (RAF) that can produce large-scale metal parts. RAF is a type of directed energy deposition that prints metal within an inert gas chamber, using a robot with a metal deposition head. The metal gets deposited layer by layer, enabling near-net-shape objects to be printed in a few hours. These objects are then machined to final specifications.

Prodways has tested the platform with a variety of metals, focusing on titanium for use in aerospace applications. It claims that the method can produce parts without porosity and with greater mechanical resistance than methods like selective laser melting and electron beam melting. The current prototype can print parts of over 70cm in size, but the final version is likely to print objects as large as 2m. 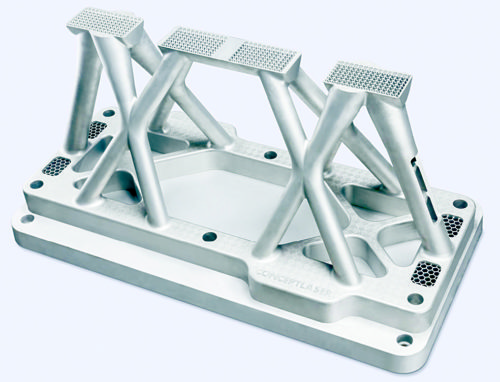 Atlas, a prototype of GE’s new printer, can 3D print objects up to 1m long in at least two directions, using titanium, aluminium and other metals (Courtesy: Concept Laser)

In June, Carpenter Technology Corporation announced the availability of their new Puris 5+ titanium powder for 3D metal printing. Made from TI-6AL-4V grade 5 titanium, the custom alloy enables maximum reusability without compromising on strength. It has an excellent strength-to-weight ratio and biocompatibility, and can withstand temperatures up to 800°C. However, what experts believe to be a significant differentiator is the alloy’s oxygen balance. If a metal powder is exposed to too much oxygen, it gets contaminated and rendered unfit for reuse. But, Carpenter’s CTO claims in a press report that their metal alloy provides simultaneous optimisation of powder recyclability and strength. Additionally, achieving the oxygen balance in the powder is easier, more efficient and more effective from the start and throughout the titanium powder lifecycle.

The industry is already keen to put Carpenter’s titanium powder to good use. Carpenter has partnered with 3D printing start-up Desktop Metal to provide the powders for use inside its material cartridges. Other companies like OR Laser, PyroGenesis and GKN Hoeganaes are also working on the production of metal powders for 3D printing. The aerospace industry is expected to be a key consumer of these powders, as it warms up to the idea of using 3D printed metal parts.

Breakthroughs in medicine and healthcare

In yet another development, SI-BONE received FDA approval for its iFuse-3D implant, supposedly the first 3D printed titanium implant for use in the sacroiliac (SI) joint. The implant is placed between the ilium and sacrum bones on each side of the pelvis.

SI-BONE has developed a proprietary 3D printing technology in order to develop the implant. The implant features an enhanced porous surface that resembles the trabeculur structure of cancellous bone and a unique fenestrated design; both of these features combine to make an environment that promotes bone ongrowth, ingrowth, through growth and intra-articular fusion. The fenestrated structure and surface were specifically designed to promote intra-articular fusion and offer enhanced osteointegration.