Wearable applications and IoTs are expected to drive double-digit growth in the global market for sensors. Due to decrease in manufacturing costs and low power consumption of sensors, most traditional wired connections will be replaced with wireless sensors and integrated into wireless networks in the future.

The best example of this sensor is found in your smartphone camera. An image sensor detects and conveys the information that constitutes an image. Digital imaging is fast replacing analogue imaging. Most digital cameras use CMOS sensors, which allow faster speed with lower power consumption.

An image sensor from Renesas is shown in Fig. 6.

The most common biometric sensor is your fingerprint module. R30x fingerprint module is quite popular among hobbyists and experimenters. The latest generation of fingerprint sensors from Qualcomm consists of sensors for display, glass and metal, detection of directional gestures, and underwater fingerprint match and device wake-up. These sensors are designed as both an integrated solution with Qualcomm Snapdragon mobile platforms, and as standalone sensors that can be used with other non-Snapdragon platforms. Qualcomm fingerprint sensors for glass and metal are likely to reach the market in the first half of 2018.

Sensors printed on flexible substrates are becoming popular. The next generation of printed sensors will enable applications ranging from human-machine interfaces to environmental sensing. The IDTechEx report predicts the market for fully printed sensors to reach $7.6 billion by 2027.

Printed sensors may have a very simple structure with only a few electrodes, while others are much more complex requiring deposition of multiple layers. What they have in common is the capability to be manufactured on plastic substrates, which offer advantages in terms of mechanical flexibility, thinness and weight reduction.

Microelectromechanical systems (MEMS) are devices characterised both by their small size and the manner in which these are made. These are made up of component sizes between 1 and 100 micrometres. The most notable elements are microsensors and microactuators.

MEMS devices can vary from simple structures to extremely complex electromechanical systems with multiple moving elements under the control of integrated microelectronics. In other words, MEMS sensor is a precision device in which mechanical part and micro sensors along with a signal-conditioning circuit are fabricated on a small piece of silicon chip.

Generally, MEMS consist of mechanical microstructures, microactuators, microsensors and microelectronics in one package. Fig. 7 shows the block diagram of a MEMS device.

Microsensors detect changes in a system’s environment by measuring thermal, chemical, electrical or mechanical information. These variables are processed by microelectronics and then microactuators act according to the changes in the environment.

Some common types of MEMS sensors available in the market are:

1. MEMS accelerometers. These are used to measure static or dynamic force of acceleration. The major categories are silicon capacitive, piezo-resistive and thermal accelerometers.

MEMS accelerometers are used in smartphones for various controls including switching between landscape and portrait modes, anti-blur capture and pocket-mode operation.

2. MEMS gyroscopes. These detect the angular rate of an object. MEMS gyros are used for vehicle stability control with a steering-wheel sensor and rollover detection.

3. MEMS pressure sensors. These sensors measure three types of pressures: gauge, absolute and differential pressure. The sensor is integrated with a diaphragm and a set of resistors on integrated chips so that pressure is detected as a change in resistance. These sensors are used in automotive, industrial, medical, defence and aerospace applications. In automotive systems these are widely used in oil pressure sensor, crash detection, fuel-tank vapour pressure monitoring, exhaust gas recirculation, engine management system, etc.

Nanoelectromechanical systems (NEMS) are a class of devices like MEMS but on the nanoscale. These are the next miniaturisation step after MEMS devices. Nanoresonators and nanoaccelerometers are examples of NEMS. Usually, NEMS rely on carbon-based materials, including diamond, carbon nanotubes and graphene. One of their most promising applications is the combination of biology and nanotechnology. Nanoresonators would find application in wireless communication technologies, while nanomotors might be used in nanofluidic pumps for biochips or sensors. 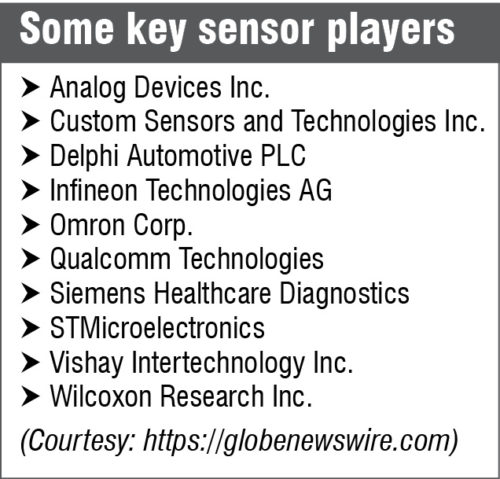 The exact sensor materials depend on their type and application. For example, digital, analogue, proximity and image sensors have their own materials, structures, fabrication techniques and packaging. Here we cover materials and fabrication techniques mainly for the latest sensors like MEMS commonly adopted by most manufacturers. Materials used in electronics can play an active or passive role. Some materials play both roles.