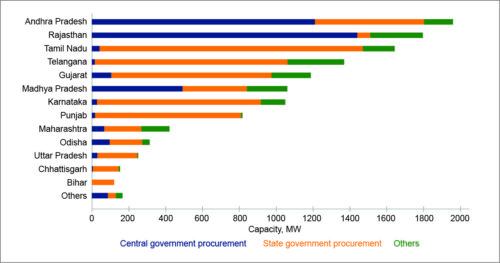 Being a lucrative solar power market, India attracts both global and local investors. However, the country is far from attaining self-reliance in solar module manufacturing. According to Ministry of Commerce data, India imported 5.7GW or about 89 per cent (84 per cent from China alone) of its total solar module requirements in FY 2016-17 (Fig. 4). The total value of these imports is estimated at US$3 billion, equivalent to 2.8 per cent of the country’s total merchandise trade deficit.

According to a BTI estimate, India’s total module manufacturing capacity is 5.286GW. However, most of this capacity is obsolete, sub-scale and uncompetitive. Total domestic production in 2016 was about 1.33GW. Adani is the biggest module manufacturer with 1.2GW capacity, followed by Waaree, Vikram and Emmvee with capacities of 500MW each.
Though solar module imports have increased significantly in the last four years in line with growth in capacity addition, exports have dropped notably (Fig. 5).

This increasing dependence on imports in a growing and strategically important solar sector has created various stress points in the Indian economy, which may lead to an abrupt policy reaction by the government. However, the Indian government needs to consider long-term implications for the sector and chalk out a well thought-out plan for domestic manufacturing instead of introducing short-term support measures to counter China’s monopoly in this sector.

Advances in the chinese market

China has announced huge subsidies and other support measures to scale up its solar PV manufacturing and dominate the global market. This has resulted in a massive increase in the Chinese manufacturing capacity from 23GW in 2013 to over 70GW today, despite the steep fall in prices. China also provides support for new technologies through its ‘Top Runner’ programme, which encourages the industry to migrate to higher-efficiency PV products.

So far, the Indian government’s priority has been to increase generation capacity and lower tariffs. But in the absence of a proper domestic manufacturing ecosystem, such measures are not enough to enable Indian manufacturers to compete with Chinese imports.
Is GST ‘good and simple’ enough?

In accordance with the ‘one nation one tax’ policy, solar panels and solar PV cells now attract a concessional GST rate of 5 per cent. This GST rate as against the effective 0 per cent rate of taxation will increase the total project costs.

However, the increase in project costs may be offset by the following factors:
1. Removal of the cascading effect of taxes
2. Availability of input credit resulting in improved cash flows and EBITDA (Earnings Before Interest, Taxes, Depreciation and Amortisation)
3. Reduction in administrative and warehouse costs due to the abolition of multiple tax compliance requirements
4. Reduction of tariff-related trade barriers across the country enabling the growth of a common market

With global solar module prices firming up due to extension of the solar Feed-in Tariff deadline in China, GST has come at an unfavourable time for the solar sector in India. Project delays can be expected and one cannot rule out the risk of litigation between project developers and discoms over the sharing of additional costs. The adverse impact will also be felt in the rooftop solar market, where market activity is expected to slow down in the near future.

Solar power as a clean energy technology option has already surpassed expectations, and this trend could continue. However, availability of grid-scale energy storage is critical to ensure sustainable growth of the solar sector. Therefore the onus lies with the energy storage industry to deliver low-cost yet reliable storage solutions. 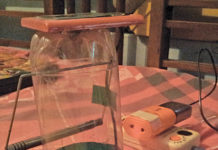