Science fiction is inching closer to reality with the development of revolutionary self-propelling liquid metals—a critical step towards future elastic electronics. At present, electronic devices like smart phones and computers are mainly based on circuits that use solidstate components, with fixed metallic tracks and semiconducting devices. This leads to rigid structures. Besides, none of the current technologies is able to create homogeneous surfaces of atomically thin semiconductors on large surface areas that are useful for industrial-scale chip fabrication.

Advancements in electronics can be made through flexible and dynamically reconfigurable soft circuit systems. This involves taking electronics beyond the confines of solidstate circuits to soft-state circuits. The goal is to create elastic electronic components. These are a type of soft circuit systems that would function in a way analogous to biological cells. That means electronic circuits that can move independently and also interact with each other to construct new circuits. To achieve this, liquid metals are required.

The use of liquid metals in electronics has always fascinated the scientists due to their inherent advantages of fluidity and shape-shifting qualities. However, there are issues to be dealt with, like availability of only a few pure liquid metals at room temperature. Among liquid metals, non-toxic alloys of gallium so far seem to be the most promising candidate for realising the dream of truly elastic electronic components.

Though all the pure metals listed in the table (next page) are liquid at room temperature, these are not suitable for use in electronics due to reactivity and stability problems associated with them. Liquid metals also consist of alloys with very low melting points, which form an eutectic that is liquid at room temperature. The standard metal of choice used to be mercury, but gallium-based alloys, which are lower both in their vapour pressure at room temperature and toxicity, are being used as a replacement in various applications. 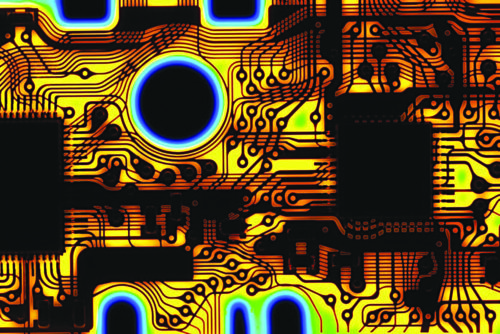 Static circuit boards may one day give way to dynamic, changeable ones that can pop up on demand (Image courtesy: https://cosmosmagazine.com)

Gallium shares similarities with aluminium, indium and thallium. It is commonly used to make alloys with low melting points, which are predominantly used in electronics. For example, gallium arsenide is used in microwave circuits. Some of the common gallium alloys are Ga-In-Sn, Ga-Al, Ga-In, Ga-Sb, Ga-Sn, Ga-Pb, Ga-Mg, Ga-Bi and Ga-Bi-Sn.

Gallium alloys are ideal candidates for flexible electronics as these liquid metals are malleable and conductive. Also, the researchers could manipulate gallium alloys easily without touching them. For liquid metal based flexible printed electronics, the ideal properties of the core manufacturing material, i.e., room-temperature liquid metal—currently mainly represented by gallium and its alloys—are excellent resistivity, enormous bendability, low adhesion and large surface tension. With such properties, any droplet of liquid metal contains a highly-conductive metallic core and an atomically thin, semiconducting oxide skin. These are the key parameters for developing flexible electronic circuits.

The suitability of gallium for future electronics was demonstrated recently by researchers in a study in which they (researchers) immersed liquid metal droplets in water. Due to ionic interactions, the metal was able to move freely in three dimensions—the key to developing a suitable material in understanding the influence of the surrounding fluid on the metal. The researchers showed how adjustments made to concentrations of acid, base and salt components in the water were influential. Getting this right should open the door to creating moving objects, switches and pumps—each necessary for flexible electronic devices.

Scientists are concerned that the fundamental technology of electronics has not progressed much for many decades, and mobile phones and computers today are no more powerful than they were five years ago. They are searching for a technology that will allow them to increase the processing power of electronic components.

Researchers believe that the answer lies in ultra-thin components made by printing with liquid metals. The 2D printing technique can create many layers of incredibly thin electronic chips on the same surface, dramatically increasing the processing power while reducing costs. Using liquid metals to create integrated circuits that are just atoms thick could lead to the next big advance in electronics. The process opens the way for production of large wafers around 1.5 nanometres (nm) in depth; a sheet of paper, by comparison, is 100,000nm thick. Other techniques have proven unreliable in terms of quality, scaling and functioning at very high temperatures (550 degrees or higher). Researchers hope that creating electronic wafers just atoms thick could overcome the limitations of current chip production. It could also help produce materials that are extremely bendable, paving the way for flexible electronics.

Metals like gallium and indium have a low melting point. These produce an atomically thin layer of oxide on their surface that naturally protects them. It is this thin oxide which is used in fabrication method. By rolling the liquid metal, the oxide layer can be transferred onto an electronic wafer, which is then sulphurised. The surface of the wafer can be pre-treated to form individual transistors. This novel method has been used to create transistors and photo-detectors of very high gain and very high fabrication reliability in large scale.

It has long been a dream in the electronics industry to be able to write out electronics directly, as simply as printing a picture onto paper with an office printer. The good news is that the first-ever prototype of a liquid-metal printer has been fabricated. It took optimisation of a series of industrial design and technical issues such as working reliability, printing resolution, automatic control, human-machine interface design, software, hardware, and integration between software and hardware, to create this high-quality personal desktop liquid-metal printer.

This liquid-metal printer is an automatic, easy-to-use and low-cost personal electronics manufacturing tool with many possible applications. As engineers have already manipulated the movements and shape of a drop of liquid metal by adjusting the acidity of its watery environment, shape-shifting electronic circuits that can self-assemble are inching closer. Further, static circuit boards may one day give way to dynamic, changeable ones that can pop up on demand.

Gallium and Indium have different melting points, yet when mixed together, these form an alloy that is liquid at room temperature. Such an alloy is termed as an eutectic alloy. Researchers found that if they applied a small voltage (less than one volt) in water to a blob of the eutectic alloy, they were able to reduce the surface tension significantly, resulting in the molten metal spreading and flattening out. When the voltage was removed, the high surface tension returned, and the blob once more resumed its spherical shape.

The amount of surface tension could also be varied depending upon the voltage, making the blob more or less viscous. In other words, the liquid metal could be held in various states of liquidity. This technique—a version of electrohydrodynamics in which electric currents affect the movement of liquid metals—relies on an oxide ‘skin’ forming on the surface of the alloy when a voltage is applied. This skin behaves as a surfactant, lowering the surface tension between the metal and the surrounding fluid. The significance of this behaviour is that the metal could be made to flow in and out of variously shaped capillaries or moulds, allowing the alloy to take different contours. If these shapes were that of an antenna, for example, the metal could behave as a highly-variable or tunable antenna capable of morphing its shape to receive or transmit a wide range of different wavelengths all from the same component.

Researchers have experimented with other versions of shape-shifting antennae in the past, but this is the first time that they have utilised electricity—rather than mechanical deformation—to alter the shape. This technique to control the movement of liquid metals can be used to change the shape of antennae and complete or break circuits. It could also be used in microfluidic channels, MEMS, or photonic and optical devices. Many materials form surface oxides, so the work could extend beyond liquid metals.

Researchers have taken the first steps towards making the science fiction a reality by developing a way to control the surface tension of liquid metals with the application of very low voltages. This may offer opportunities in a new field of morphing electronic circuits, self-healing electronics or even self-assembling terminator-style robots. However, challenges remain before the potential of liquid-metal flexible printed electronics is leveraged for end-user electronic gadgets and more extensive applications in the future. These include significantly different adhesions of liquid metal inks on various substrates under different oxidation degrees, weakness of circuits, difficulty in fabricating high-accuracy devices, and low rate of good-quality production.