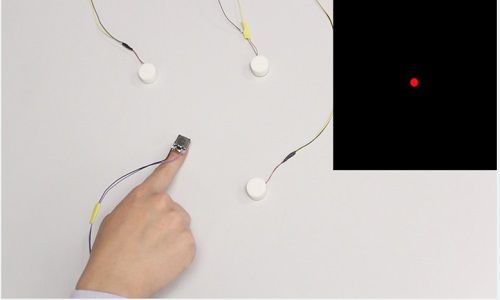 Performing any activity using touch sensing is very convenient. And this has increased even more, thanks to a technology that facilitates the utilisation of the touch feature on everyday surfaces, be it wood or paper.

Touch technology is gradually being implemented in digital devices such as smartphones, televisions, computers, ATM screens and many more, making buttons a bit dated. Touch sensors like capacitive and resistive, do a good job in sensing any presence upon them but require specific positioning of fingers on them and extensive calibration/calculating of the position coordinates. Wouldn’t it be fascinating to use touch-based controls on practically any surface, from any randomly-located position, even if it is not as smooth as glass?

Well, that may come true with the help of VersaTouch, a portable and touch interactive plug-and-play system that uses active acoustic sensing to track touch locations as well as the touch force of multiple fingers on everyday surfaces, such as wood, paper, fabric, plastic and so on without doing an extensive calibration.

Created by a team of researchers from the University of Auckland in New Zealand’s Augmented Human Lab, the system is quite versatile. Using finger-mounted audio transducers, the sound waves that are transmitted from the wearer’s finger placement on a surface is calculated by a system of sensors to locate their distance, positions and/or movements.

The system setup includes an Arduino Due to receive signals, a Teensy 3.6 USB development board to control the transducers and a laptop with a Java program to process the data and calculate the touch positions.

The entire project enables accuracy and rapidness and is arranged in arbitrary layouts on any surface. VersaTouch is capable of providing vibrotactile feedback to fingertips through the same actuators that are used for touch sensing.

More information about the project can be found here.