Robots are making their presence felt. These indomitable marvels are not just confined to high-tech labs but being created in our own drawing rooms—thanks to robotic kits -- Swati Sharma

Remember your first toy kit with which you built a motor-run fan or lit a bulb using pencil cell batteries? Robotic kits are advanced versions of those toy kits. Whether you are a beginner, advanced user or a hobbyist, if you wish to assemble your own robot from a kit there are certain things to keep in mind.

What does a robotic kit consist of?
Robot kits contain all the components required to assemble your own bot. These include electronic components, servo motors, gears, battery, sensors, microcontrollers, mechanical frame or chassis of the robot with plastic and metal parts, etc. 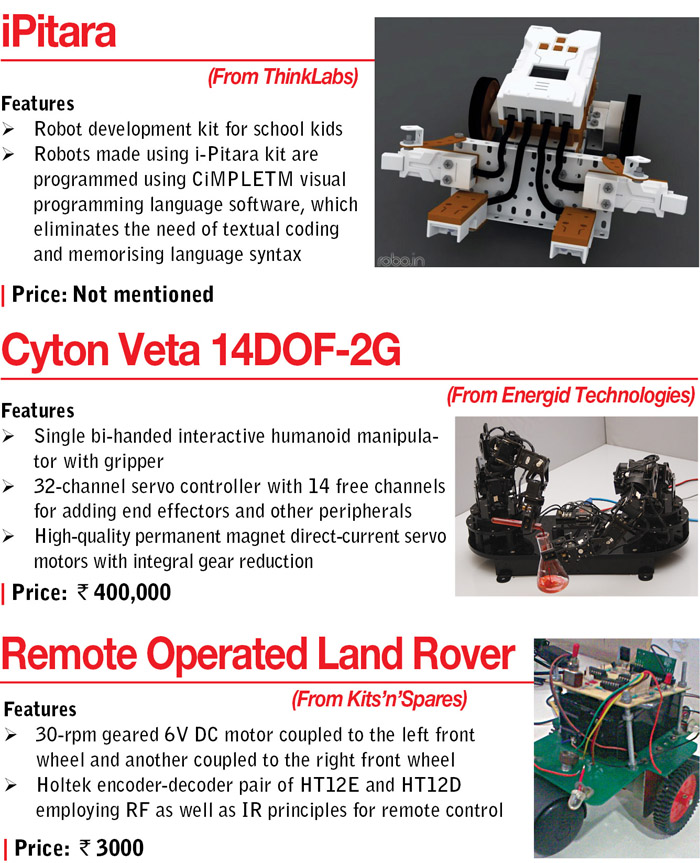 “A standard kit comes with a programmable platform that is the logic processor of the bot, motors and actuators to move the bot, sensors to gather information about surroundings, power supply and PC interface kit to enable programming of the bot via PC. Other specialised kits contain these components in variation,” says Adwait Deshpande, manager-R&D, ThinkLABS.

Some robots are wired. These can be connected to a desktop PC or laptop via USB or serial cable for operation using a set of commands. Others are wireless, operated with a remote or Bluetooth.

Kits can be for educational purposes or for use in industrial applications. The foremost thing is to define the application of the kit. A beginner should obviously start with the basics and not go for an advanced kit.

Deshpande highlights, “Basic kits are closed boxes with focus on structure building and logic building. Here, the aim is to explore the project building part and make the other technical aspects as simple as possible. Advanced kits are usually left open to hack, modify or improvise the circuit. Open access to the kit helps build add-ons and explore possibilities.”

While the basic components of many robotic kits are the same, these differ from basic- to advanced-level kits. “The primary difference between basic and advanced kits is mainly in the features available, fidelity and number of sensors, adaptability for different applications, components used and available documentation,” says Sachitanand Malewar, research scholar at TI DSP Lab, IIT Mumbai, and director (technology), Nex Robotics.

“In advanced robotic kits, the mechanical elements are generic and can be configured to create any mechanical design. The processor can be expanded to increase memory and computing power. Various generic communication protocols are supported. Sensor interfaces are general and open so that any expansion is possible. The programming environment in advanced kits supports any kind of programming like structured, graphical and cross-compilers,” he adds.

Indian vs imported kits
There are both made-in-India kits as well as imported kits available in the Indian market. You can order a kit even online after matching your requirements with the offered kit’s specifications.

“India was introduced much later to the field of robotics as compared to the developed nations. Even though we are far behind the level that has already been achieved, we are progressing at a fast pace in order to match their level within the next few years,” shares Pradeep Kumar Sharma, director, Robosapiens Technologies.

“The Indian robotics kits are in a nascent stage as compared to imported ones. There is lot to be done in finishing and accuracy,” Ashutosh Agarwal, managing director, Tesca Technologies, says.

However, Malewar differs: “Indian robotics kits have come a long way since last four years. These are now at par with any international platform.”

The price of a robotic kit increases with the level of advancement. Indian robotic kits are thus generally lower priced than imported kits.

Siddharth Dev, CTO & founder, Technido, says, “The price-to-feature ratio is reasonably good for Indian kits but aesthetically they are not as attractive as imported ones. Due to the low scale of production and sales, most manufacturers make aluminium or other metal chassis that have limitations of bending and producing them into attractive forms.”