Some latest DC-DC converters are introduced here, along with the basic and new features, so that designers can select the best devices for their applications.

A DC-to-DC converter is basically a DC electric power converter required in some devices because the standard DC sources (mostly batteries like 1.5V, 6V, 12V) available are either too high or too low in voltage to drive a particular circuit or gadget. Therefore some form of power conversion, either step-up or step-down, is required from a standard DC source.

For example, most mobile devices have 3.7V batteries. To charge them from a 12V car battery would require a DC-DC converter circuit because 12V is too high to charge a 3.7V battery. Again, most of the embedded system circuits in automobiles and industrial applications require either 3.3V or 5V DC sources, so you need power converters to drive them from a 12V battery. DC-DC converters are also used in many consumer electronics and domestic electrical systems.

Power levels of DC-DC converters vary from very low (in small batteries) to very high (for high-voltage power transmission). Most of these converters are available as integrated circuits (ICs) and do not need many external components. These are available as complete hybrid circuit modules or as plug-in modules ready to use in an electronic assembly. Most power converter ICs include an integrated power MOSFET and are classified as regulators because they regulate the output voltage.

The major DC-DC converter types are linear, switched mode, non-isolated, and isolated.
Linear. It uses resistive voltage drop to create and regulate a given output voltage. A linear converter can generate a voltage that is lower than the input voltage.

It converts DC voltage level by storing the input energy temporarily and then releasing that energy to the output at a different voltage. Energy storage can be done in either a magnetic field component like an inductor or a transformer, or in an electric field component such as a capacitor. Transformer-based converters provide isolation between the input and the output.

This converter is used when change in the voltage is small. It does not give protection from high electrical voltages and noise. The converters in this group include step-down (buck), step-up (boost), and buck-boost converters.

It has a separation between input and output terminals. It has high isolation voltage properties and can block noise and interference. It also has cleaner DC output. This group includes flyback converter and forward converter.

Constant current provides constant output current, irrespective of the changes in load impedance. Over-voltage protection limits or shuts down the voltage output when over-voltage condition occurs. Over-current protection limits or shuts down the current output when over-current condition occurs. Short-circuit protection protects the converter in the event of a short circuit at load end.

Some new features in DC-DC converters

There are many new features being added in some latest DC-DC converters. Apart from the wide range of input and output voltages, new features may include noise optimisation, higher efficiency, digital interface, power management, multi-channel input and output, remote control, ensuring compliance and compatibility, safety standards, among others. Table 1 lists different DC-DC converters released/announced recently by some manufacturers. 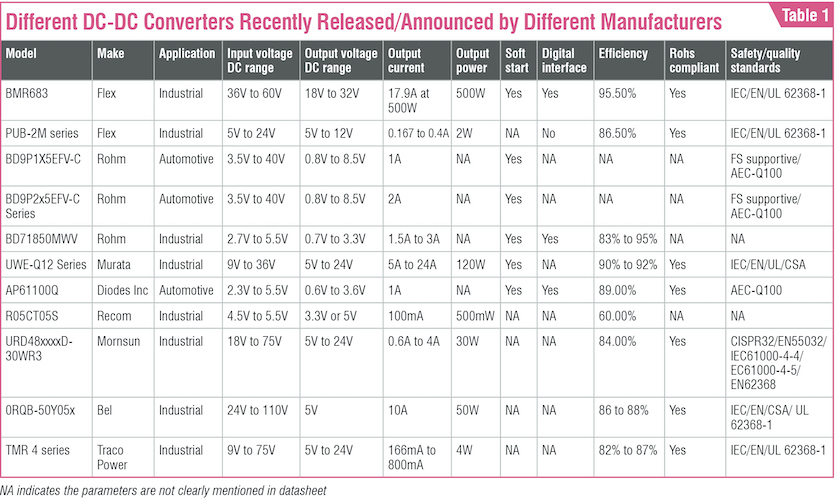 Noise becomes an important parameter to consider for better performance and accuracy in DC-DC converters. Optimising a DC-DC converter for noise and electromagnetic interference (EMI) would enhance the performance of the power supplies in automotive and industrial applications. Electromagnetic compatibility (EMC) standards ensure proper operation of the equipment and control of EMI, so that unwanted effects are prevented.

Efficiency is an important design parameter of DC-DC converters. Along with innovation and introduction of CMOS devices, digital control can improve the efficiency of a previously analogue design. With careful design, modern switching regulators/converters can achieve 90 percent efficiency and even more. For example, BMR683 can have high efficiency, typically 95.5 percent at full load. BD71850MWV has its efficiency target between 83 percent and 95 per cent. Murata’s UWE-Q12 series DC-DC converters have efficiency up to 92 per cent.

Multi-input multi-output (MIMO) feature in newer DC-DC converters allows users to integrate multiple input sources and multiple output loads simultaneously. That is, this type of converter allows input sources to be added or removed seamlessly without cross-regulation problem. It is easy to achieve high extension capability for arbitrary inputs and outputs. For example, BD71850MWV integrates six buck regulators and six low-dropout (LDO) regulators to provide all the power rails required by the SoC and the commonly used peripherals.

The soft-start function in DC-DC converter is used to prevent large inrush current and output voltage overshoot. The function could be with an internally fixed soft-start time, or externally adjustable soft-start time, setting pin and externally adjustable oscillator duty cycle. Soft-start function is included in many DC-DC converters including BMR683, BD9P1X5EFV-C, BD9P2x5EFV-C, BD71850MWV, UWE-Q12 series, and AP61100Q.
Some DC-DC converters are integrated with remote control function, offering a convenient way to control your application. The control could be through a wire or wireless using infrared (IR) or some other wireless technology. For example, UWE-Q12 series has a remote sense circuit through which the product can be controlled using IR technology. TMR 4 series converter has dedicated pin for remote control function.

Ensuring safety is paramount to product users and industry. Adequate safety measures include fail-safe design against physical injury, damage to property, failure, or malfunction of a product. There are many industry safety standards that require restriction of hazardous substances or RoHs compliance, such as IEC/EN/UL safety requirements, Automotive Electronics Council (AEC) quality standards, etc. For example, BMR683, PUB-2M series, UWE-Q12 series, 0RQB-50Y05x and TMR 4 series meet safety requirements according to IEC/EN/UL62368-1, while BD9P1X5EFV-C, BD9P2x5EFV-C, and AP61100Q are AEC-Q100 qualified.