What to look for in LED bulbs 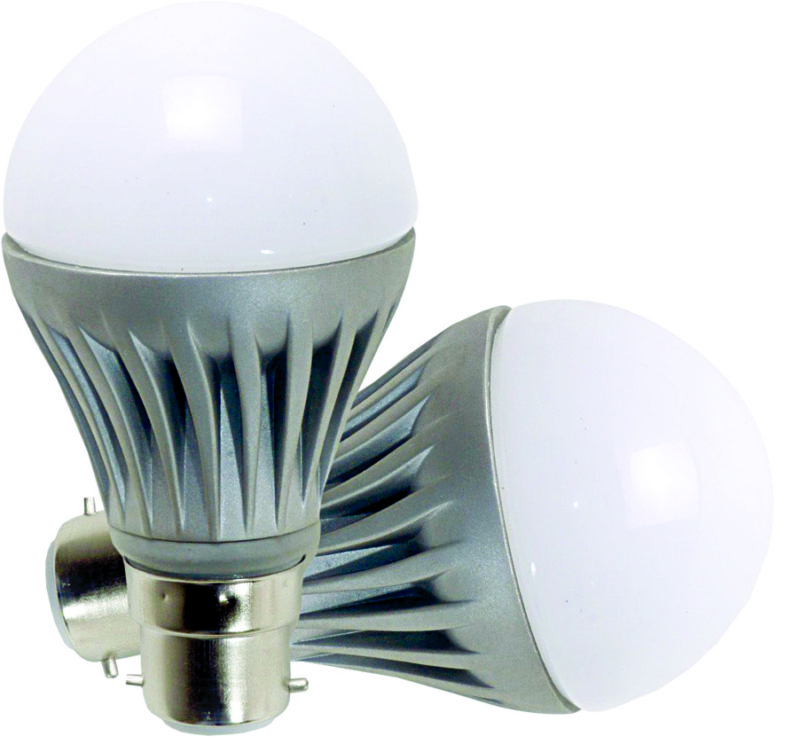 Think of lighting and one cannot ignore LED products, especially LED bulbs which have gained immense popularity in the last few years. And while you may think you know it all while buying an LED bulb, there are many crucial aspects that you may be unaware of. So you end up purchasing poor-quality LED bulbs. Here we give you a lowdown on all the related factors so that you make a well-informed decision before you part ways with your money.

Lumens, watts, efficacy and power factor are common LED lighting terms. A good-quality LED bulb is one that consumes less wattage of electricity. Lumens, which are a measure of brightness, should be high, and the consequent efficacy, i.e., lumens per watt, should be greater than 100. Power factor indicates the power fraction actually utilised. It should be 0.9 or higher. While you may be aware of these basics, there are a plethora of other factors to consider when buying an LED bulb.

The quality of the chipset used highly influences the performance of any LED product. LED bulbs using a high-quality chipset will provide better output and last longer, but cost more.

Among a selection of chipset types, the most commonly used chipset is based on the surface-mount device (SMD) technology. SMD has its own set of reliability factors, but not without challenges like comparatively lower efficacy (50 to 80 lumens per watt) and complex circuit design. This makes chip-on-board (COB) a better proposition for the chipset. 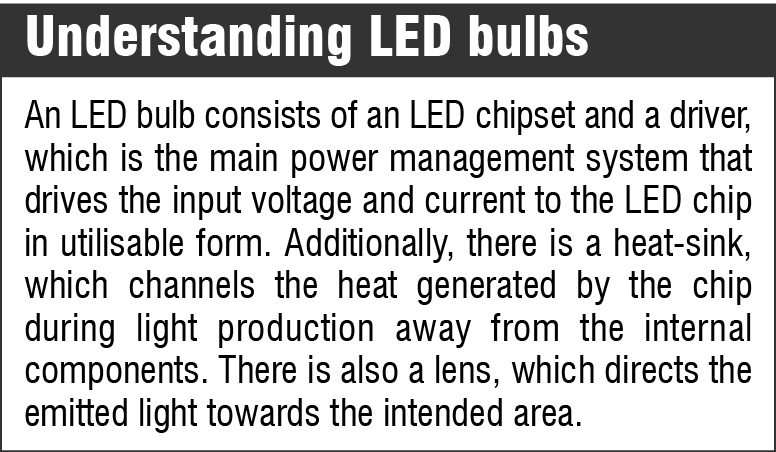 The circuitry of COB simplifies the installation and space utilisation of components. The manufacturing cost of COB chipsets is 5-10 per cent less than of SMD chipsets, which decreases the cost of the end product. Additionally, COB brings higher efficacy (70 to 110 lumens per watt), thus it is used for high lumen output in LED bulbs. However, one drawback of COB technology is the unavailability of colour changing options, which can be achieved through SMD chipsets with upgradations. But then this will result in an increase in the price of the LED bulb.

The latest to hit the market is multiple chips-on-board. The architecture offers even higher efficiency and colour rendering index (CRI), with better heat management. However, at present, this technology is not used much in the Indian market, except for low-wattage LED bulbs.

Inconsistent voltage supply and frequent surges and spikes may overheat and damage the LED circuitry. Surge protection is a blockage mechanism against a power input over a specific threshold, ensuring voltage safety limit for the device. The bulb itself should have a voltage range within 130V-270V, and an in-built surge protection level of at least 1.5-2kV.

CRI is a measure of the ability of a lighting equipment to reproduce colours of light as close as possible and is marked between 1 and 100. Higher CRI helps in better colour distinction and visuals while decreasing strain on the eyes. Typically, LED bulbs have a CRI of over 82.

It is an identification of the colour of light emitted by an LED equipment. Colours are measured based on temperature notations in Kelvin (K). LED bulbs can emit different ranges of light colour—warm white (2700K to 3300K), neutral white (4000K to 5000K) and cool white (above 5000K). Unicolour bulbs can emit light only at a single CCT, and thus need to be selected accordingly.

LED bulbs can also be dimmed based on the circuitry, subject to compatibility of the bulb with the available dimmer switch.

The Indian market is flooded with cheap LED products of less-than-standard quality. Buying the wrong product leads to losses in the long run. Here are a few pointers to ensure you choose the right LED bulb.

The age-old assumption is that the higher the consumption wattage marked on a bulb, the higher is its output. Well, that might have been true for the old incandescents but for LEDs that concept is history. In reality, higher lumens output and lower consumption wattage is the ideal combination to look for in a bulb. Thus, a bulb marked to produce a certain lumens output by consuming, for example, 7 watts, is better than a bulb producing the same lumens consuming 10 watts of power.
If you intend to replace your incandescent bulb or CFL with an LED bulb, you can use the table given here to choose the LED bulb’s correct lumens in accordance with your existing bulb’s wattage.

Good-quality LED bulbs come with a warranty period of at least three years. Anything less than that should raise concerns about the fairness of the deal.