RF Modules to Suit Your Application

Everything is going from wired to wireless, owing to clutter associated with the wired systems. RF (radio frequency) communication technology is the one making this change happen. RF modules with different protocols are now used widely in electronic designs to enable wireless communication. Let us take a look at different RF modules available and some parameters to select a right one for your application -- Ankit Gupta

An RF module is nothing but a small electronic device which is used to communicate between two devices, wirelessly, using radio waves. This is one of the most preferable methods of wireless communication as it does not require line of sight. Radio circuit design is a complex field and the performance highly depends on accuracy of components, a perfectly designed layout and carefully monitored manufacturing process. Also, the design needs to be then certified after conformance testing, as radio circuits are subject to limits on radiated emission. Due to all these, designers prefer to use off-the-shelf RF modules which save a lot of money and reduce time-to-market to a great extent.

These RF modules come with different carrier frequencies allowed by national and international regulations, such as 315MHz, 433.92MHz, 868MHz, 915MHz and 2400MHz. Other than frequency, these modules are also differentiated based on the protocol standards they use for communication, such as Wi-Fi, Zigbee, Bluetooth or other proprietary protocols.

Wi-Fi
Wi-Fi and WLAN have been interchangeably used in general English. Wi-Fi is a local area wireless technology that allows electronic devices to exchange data or connect to the Internet using 2.4GHz UHF and 5GHz SHF radio waves. Wi-Fi Alliance defines Wi-Fi as any wireless local area network (WLAN) products that are based on the IEEE 802.11 standards. Most modern WLANs are based on these standards, which make both these terms a synonym for each other.

Wireless revolution enters its next phase of deployment with recent advent of the Internet of Things (IoT). Now WLAN capabilities have been added even to the consumer products, which give users the comfort of controlling these devices with a smart phone or over the Internet. To achieve WLAN capabilities, of-the-shelf available Wi-Fi modules are the best solution for the reasons stated above.

There are different kinds of Wi-Fi modules available. The vendors normally categorise the modules by parameters such as data rate, range, RF band, certification and packaging type. These parametric filters will allow you to refine your search results to find the most suitable part for your application. Below are some parameters and their brief description. Table I shows some manufacturers of Wi-Fi modules.

Protocol standards. The original version of the standard IEEE 802.11 was released in 1997 and clarified in 1999, but it stands obsolete today. The wireless LAN standards in use these days include 802.11 a/b/g/j/n/p/ac/ad. Each protocol standard has different data rate, frequency, modulation scheme, range and power consumption. The newer modulation methods and coding rates are generally more efficient and sustain higher data rates, but older methods and rates are still supported for backwards compatibility.

Data rate. Each Wi-Fi standard is rated according to its maximum theoretical data rate. Different standards have different data rates due the technology used for each standard. Practically, these data rates are never reached. These are only the theoretical maximum value for a particular technology. The theoretical maximum data rate of a Wi-Fi module could be from 1Mbps (802.11b) to 6.75Gbps (802.11ac). You need to decide the required data rate for your application. Higher data rate would not always be the best choice as sometimes high data rates would not even be sustainable with large number of clients.

Transmit range. The range of a Wi-Fi network is always limited and majorly depends on the specific protocol used and the transmission power. Interference and obstruction from environment also plays some role. For example, approximate maximum indoor range for 802.11g is around 38 metres.

OS support. It is highly desirable that the module quickly gets connected and configured with Android, iPhone, Linux and other embedded OS. If you need to build in this feature into your product, you need to check the driver level support, and configuration and management support from the Wi-Fi module carefully. 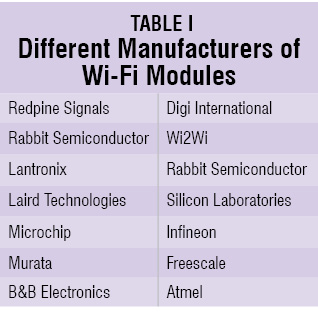 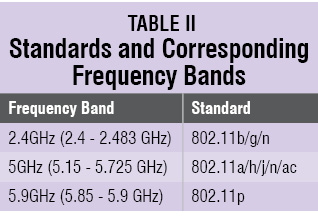 Secure Wi-Fi authentication schemes. In 2001, a group from the University of California, Berkeley presented a paper describing weaknesses in the 802.11 Wired Equivalent Privacy (WEP) security mechanism defined in the original standard. The IEEE then set up a dedicated task group to create a replacement security solution. The Wi-Fi Alliance announced an interim specification called Wi-Fi Protected Access (WPA) based on a subset of the then current IEEE 802.11i draft. WEP, WPA, WPA2, WPA2-Enterprise, WPS, WMM, WMM-PS are typical Wi-Fi security types these days. Each type has different advantages and disadvantages. These security schemes help protect information from Wi-Fi devices on a network.