Engineers know the value of solid and reliable soldering and desoldering stations. From carrying out simple soldering tasks to repairing and reworking surface-mount technology (SMT) boards, integrated circuits (ICs) and multi-layer boards, these stations are handy tools to have for every design engineer, technician, hobbyist or electronic enthusiast. In this article, we take a look at some of the latest features in soldering and desoldering stations, while highlighting the important parameters to consider before buying these for your applications.

Different kinds of stations available
Usage of soldering and desoldering stations range from very minute straight-forward jobs to heavy-duty applications. Based on the requirement and application, different stations are available, varying in power consumption, temperature range, microcontroller (MCU) based control and other features.

Contact soldering stations are the most common and popular kind of soldering stations. Abhishek Rao, technical marketing manager, element14 India, says, “These have a built-in power supply unit, which, in most cases, ensures the galvanic separation between the power circuit and the heating element.” He adds, “Voltage on the heating element can be adjusted using the power supply unit and the heating temperature can be changed accordingly.” 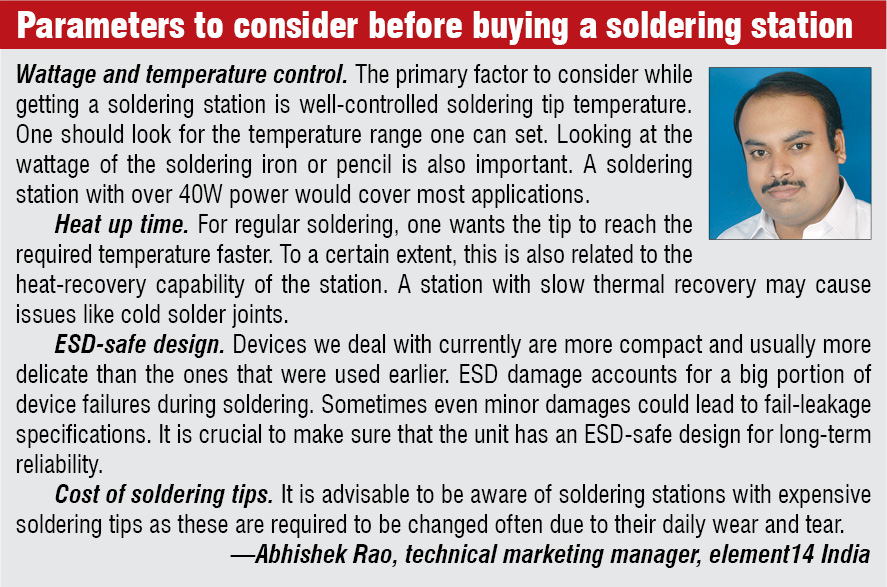 Although, lead-free stations have their own share of cons such as requirement of extra heat to melt lead-free solder, which, in turn, affects the tip of the soldering iron. Most of the reputed manufacturers educate their buyers on ideal usage of lead-free soldering stations, which helps them maintain and extend the life of soldering tips.

Soldering stations are also packaged with different kinds of heaters. “Ceramic heaters, induction coil heaters and combination of heater, sensor and soldering tip integrated into one tool are some other variations in soldering stations,” says V. Ramavallabhan, management and technical consultant, JVR Consultants.

Rao says, “Hot-air soldering stations are optimum for professionals and hobbyists because these can be used for preheating components before removing or can be used to reflow SMT components such as dual inline packaging (DIP), small outline integrated circuits (SOICs), quad flat packages (QFPes) and other ICs.”

He adds, “Infrared (IR) soldering stations are the most progressive solution in soldering of complex elements. IR light helps prevent mechanical damage and overheating of components due to concentration of the radiation beam of the IR spectrum at focal point.” 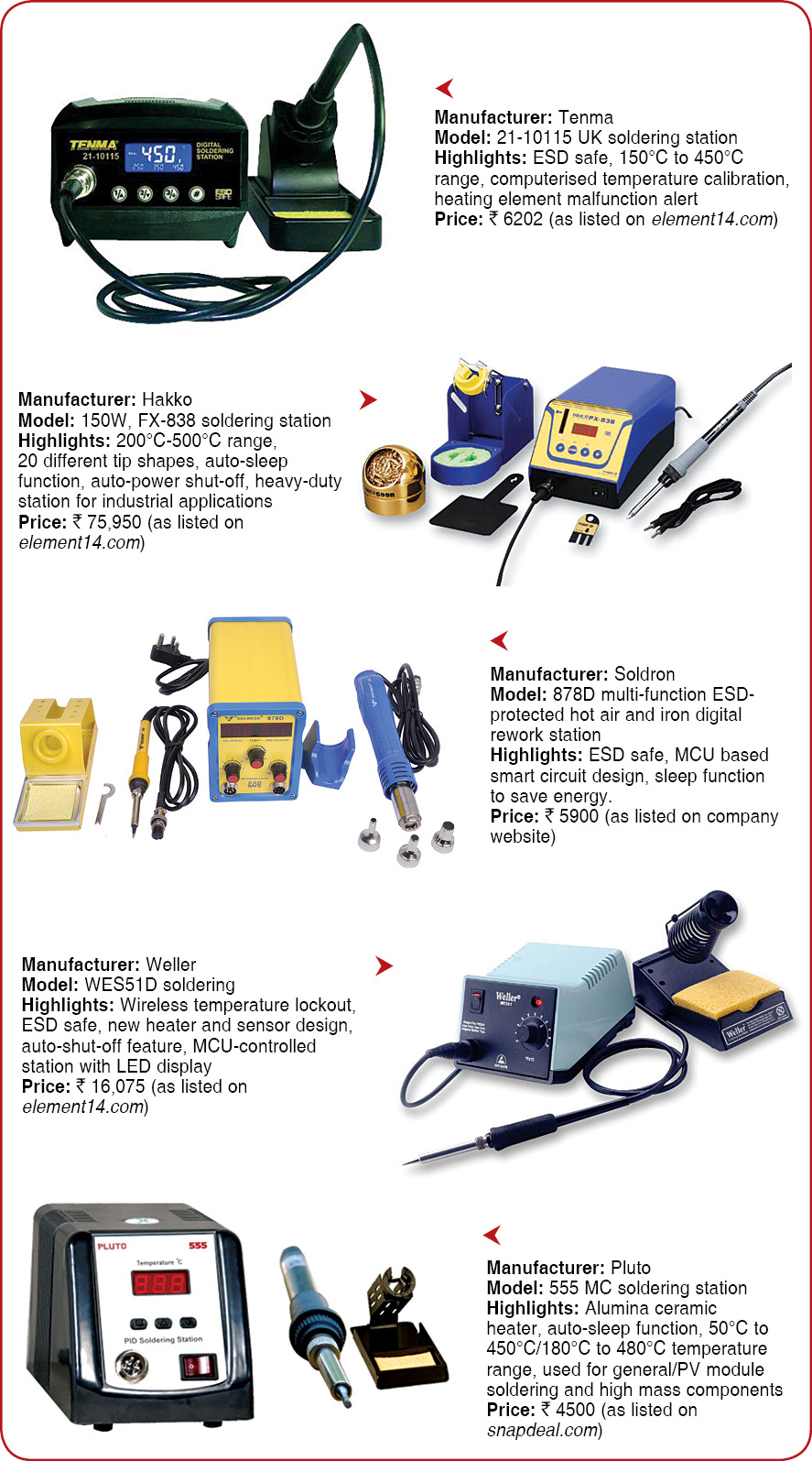 Interesting features and their benefits
Soldering and desoldering stations are a must have for all electronics professionals. Nowadays, all stations are electrostatic discharge (ESD) safe, Restriction of Hazardous Substances (RoHS) compliant and digital in nature, informs Sumeet Jain, director, Sumitron. He says, “The new-age soldering station offers digital display, digital calibration and password lock functions at a very competitive price.” He adds, “One of the recent developments is the induction heating based hybrid soldering station. These stations use the benefits of both technologies, IR heating technology and convection, to bring out the best in soldering.” 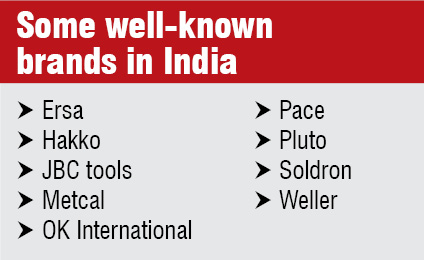 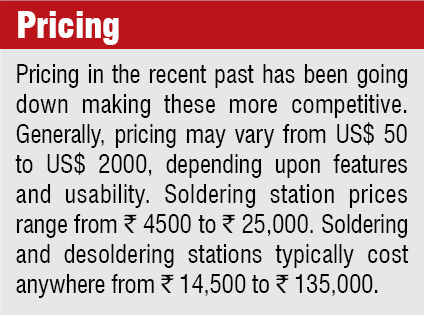 General selection criteria
Variable temperature and replaceable hardware are the two basic criterion for selecting soldering and desoldering stations. According to Ramavallabhan, the most important factor that buyers should consider is the cost of consumables of stations and availability of components like heaters, soldering tips and other accessories. He says, “These should be reasonably priced and easily available, otherwise the maintenance cost will be more than the cost of the actual unit.” 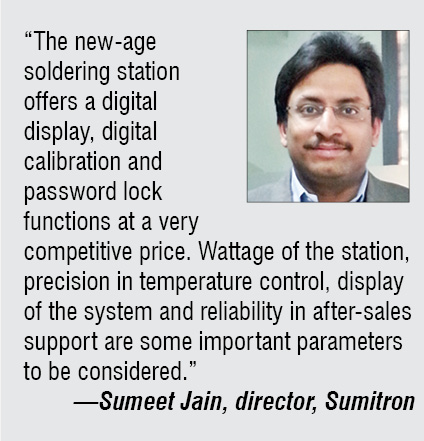 He adds, “Non-availability of accessories when required could cost you customer’s confidence and new opportunities.”

Wattage of the station, precision in temperature control, display of the system and reliability in after-sales support are some important parameters to be considered, notes Jain.

Plethora of options
From Chinese-made to established brands, there are a variety of soldering and desoldering stations available in the market with a plethora of interesting features. Application, budget and possible future uses are three important factors to strongly consider before purchasing a station.

PCBs are increasingly becoming lead-free today. Major manufacturers are now making use of lead-free solder-to-solder components on boards. It could be beneficial in the long run to purchase a lead-free soldering station. Most stations designed for soldering leaded solders cannot be used for lead-free solders. Choose wisely.