Archimedes is a free technology computer aided design (TCAD) software package used for designing and simulating submicron and mesoscopic semiconductor devices. Simulation and prediction of the behaviour of devices are based on the ensemble Monte Carlo method. The simulator is extensively used by students for understanding solid-state electronic behaviour, as well as by researchers who want a tested and working transport code to start from.

It is a complete and free software package written in C and can be copied, modified and redistributed under general-public licence (GPL). The GNU project (recursive acronym for GNU’s Not Unix) has announced substitution of the software package Aeneas by Archimedes, making this one the GNU package for Monte Carlo semiconductor devices simulation. The latest release of the software is version 2.0.1. 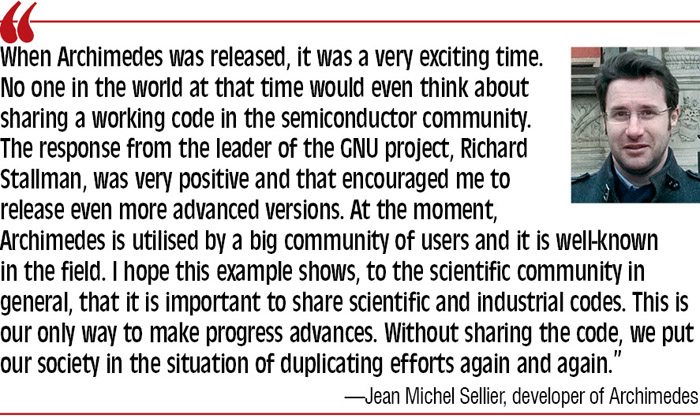 Why Archimedes
Researchers working in the semiconductor electronics industry are always interested in the miniaturisation of components. Reduction in size of the components helps in accommodating more components in the same wafer, which increases the computing power per unit area. Simulations are introduced into the design to make accurate guesses of the electron behaviour, thereby reducing costs of prototyping new semiconductor devices.

A very unfortunate situation that exists today is that most of these codes for simulation are not freely available. Every university has its own Monte Carlo simulator, a non-equilibrium green’s function (NEGF) simulation for similar research. Of course, a very large number of research papers are available, but their codes are not shared. This leads to duplication of work around the world. A researcher has to start from scratch for developing new and more advanced simulations. 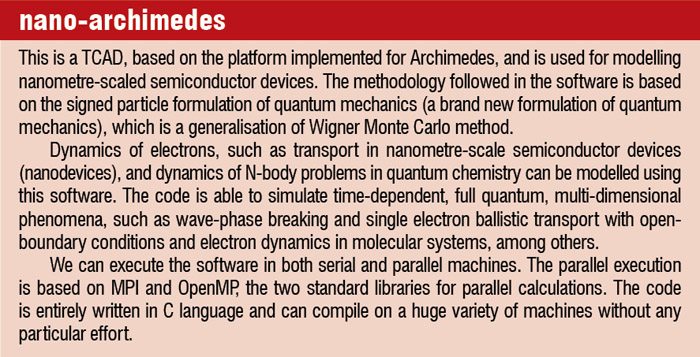 Archimedes aims to change this situation in the field of Monte Carlo device simulation by releasing under GPL, allowing the user to download and use it as a starting point of any new program. It is developed as a powerful tool for the simulation of quite general semiconductor devices. “Many scientific codes, especially in the field of numerical simulations, could greatly benefit the community if released under open licences. This is one way to get serious advancements in the field by eliminating duplication of efforts and codes,” feels Jean Michel Sellier, the main developer of the software.

The Monte Carlo method. The particle nature of electrons in the sub-classical level is exploited in this method. This nature can be completely described with the help of two vectors, the position vector and the pseudo-wave vector. In this method, the two vectors are evolved for each time instant and for every particle. The method also considers the drift of electrons on interaction with the electrostatic potential and the scattering caused due to interactions with lattice photons.

Archimedes uses the ensemble Monte Carlo method to simulate and predict the behaviour of devices. In this method, simultaneous calculation of many particles (ensemble) dynamics during a small interval of time is performed till a final time is reached. This method can be used to get both stationary and transient solutions of Boltzmann transport equation applied to a semiconductor device.

Quantum effective potential model. It is very important for semiconductor device simulations to mimic the quantum effects primarily arising from the non-zero size of electron-wave packets. Most of the effective potential models have successfully ­­­modelled the behaviours, such as drift diffusion, but unfortunately even the most sophisticated ones fail in modelling ­effects, like barrier tunnelling and/or source-drain tunnelling. The complexity further increases when used along with a very noisy method, such as Monte Carlo. Models implemented in Archimedes include Bohm potential, weighted Bohm potential, full effective potential and density-gradient potential.

Hartree approximation for electrostatic potential. The transport problem in semiconductor devices can be split into the equation describing dynamics in a given potential and the equation describing the potential generated by electrons. The electrostatic potential is described with the help of a well-known Poisson equation, which is sometimes called Hartree approximation for electrons-electron interaction. This description is helpful in modelling the electron transport to a great extent. In future, some phenomenon, like exchange-correlation effect, has to be incorporated into this model.

The first free Monte Carlo simulator
Archimedes is never the last word for semiconductor device simulators. Even developers do not claim so. The relevance of the simulator comes from the fact that this is the first open source simulator of its kind. Although many capabilities are yet to be implemented, developers are optimistic in including these in future versions. Hopefully, the simulator can cater to the needs of a semiconductor scientist, who needs a good starting point for his or her work to share it with the society.

The author is an electronics enthusiast from Kerala

15 Things To Remember While Selecting An IoT Platform