In this article, we will discuss OpenViBE software platform for the design, test and use of brain computer interfaces -- Jai Sachith Paul

Brain signals communicating directly to a computer is never an easy task, yet it is interesting that it could help humanity in a multitude of ways. In this article, we will discuss OpenViBE software platform for the design, test and use of brain computer interfaces (BCI).

A set of software modules in OpenViBE takes input from the acquisition machine [generally, electro-encephalography (EEG) signals] connected to the head, measuring electrical activity on the scalp that roughly reflects the activity of cortical neuron population.

Communication engineers around the world make use of OpenViBE for real-time processing of brain signals. The software is used to acquire, filter, process, classify and visualise brain signals in real-time. This tool finds applications in various fields including medical (assistance to disabled people, real-time biofeedback, neuro feedback and real-time diagnosis), multimedia (virtual reality, or VR, and video games), robotics and all other application fields related to brain-computer interfaces and real-time neurosciences.

The software works well on Windows and Linux operating systems and is released under GNU Affero general-public licence v3.0 (AGPL-3). 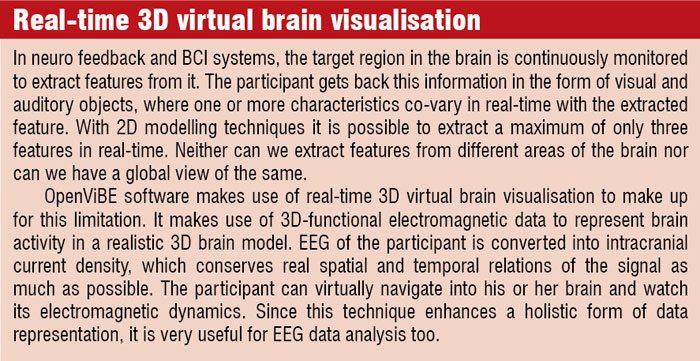