We cannot include software defined radios (SDRs) among the latest concepts evolved in wireless communication. Software radios have been present for more than three decades. However, many processes that were considered theoretical are now practically possible with the rapid pace of growth in digital electronics. Interestingly, a lot of people including hobbyists, academicians and working professionals are increasingly becoming interested in exploiting the opportunities rendered by software radios.

The infrastructure of this software is completely written in C language, whereas many user tools are implemented in Python. The latest stable release of this software licensed under GNU general-public licence (GPL) 3 is version 3.7.5.1.

Smart graphical interface for easy designs
The first question that might arise in your mind if you are not a very good programmer is, “Do I have to sit and type the entire code?” or “Is there a Simulink-like tool that may make my job easier?”

The answer is yes! This software package comes with GNU Radio Companion (GRC), a graphical signal-processing environment for all simulation needs. The GUI will seem simple and straightforward if you paid attention in your digital signal-processing classes.

For invoking GRC in Linux, you can call the GRC command. A GRC will pop up on its window and you will have a collection of built-in blocks on the right-hand side of the window to choose from. You can drag these blocks to the main window and connect these by clicking on the edges.

The function of GNU Radio here is to supply you with a multitude of blocks and execute the flow graphs after their definition. It calls the blocks one after the other, while ensuring that items are passed from one block to another.

How it is different from Simulink
For Simulink users, flow graphs will either run based on frame or on sample. The sample based model is intended to have better control over the signal-processing stream, but in designs that require better performance, frame based processing is often preferred.

In GNU Radio, flow graphs only have item based processing. An item is mostly a sample but could be a vector too. A logical description of inputs at the input port gives you the item size. In this environment, processing of the maximum possible items takes place every time the performance of the design is improved.

The downside of GNU Radio approach is that it does not allow introduction of recursive flow graphs.

Creating blocks and extending applications
From being just a beginner to a researcher or professional developing something peculiar, you may feel the lack of certain components. There are also chances that blocks are not flexible enough for your application. In this case, you may add your own blocks. Building blocks in C++ language ensure that speed and performance are not compromised. But if you want to quickly prototype something without arguing with C++, you can opt for Python. 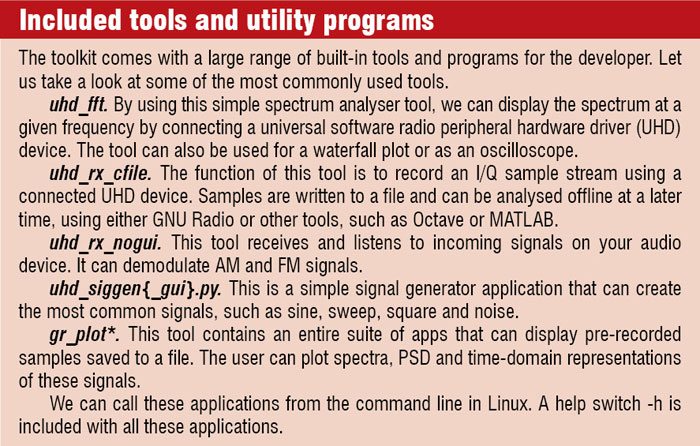 GNU Radio blocks are also available in Python, even if these are written in C++. This is made possible with the help of simple wrapper and interference generator (SWIG). Glue codes are automatically generated with the help of this functionality. This is done in order to help users code everything themselves and to enable them to enjoy the power and flexibility of Python and its libraries for Python-centric processing of signals, or making use of their favourite widget library to create any GUI.

People around the world make use of GNU Radio along with readily-available low-cost external RF hardware to develop real-world SDRs. These are also run without hardware in simulation-like environments. With developments in communication techniques, like orthogonal frequency division multiplexing, the number of users for the tool has been increasing exponentially. Hopefully, in the near future we can expect the vision behind the project to be fulfilled.

The author is an electronics enthusiast from Kerala