KTechlab presents an integrated environment for electronic design and automation (EDA) tasks. It is considered to be an educational tool to design and simulate circuits related to PIC microcontrollers and other electronics. KTechlab features an extensive circuit designer that helps auto-routing along with simulation of logic elements and common electronic components.

KTechlab has several components well integrated to help designers. Some of these are described below:

Circuit Simulator. It can simulate linear devices, non-linear devices and logics too. KTechlab can further be integrated with external simulators like gpsim so as to allow in-circuit simulation of PICs.

Editor. It can act as a schematic editor to provide a rich and real-time feedback of the simulation.

Visual Editor. It has a flowchart editor that allows KTechlab to construct PIC programs visually. This makes it easy to program a microcontroller. The editor provides a microcontroller with all its ports defined as input or output. A designer can easily program that microcontroller by dragging arrows from those ports or by drawing a flowcode for those ports.

For example, let us program a PIC16F84 microcontroller to blink an LED. To do that, we will have to set any one port as output. Let us do that for PORTB,0 pin. The two ways in which it can be programmed are:

1. Click the arrow on the PORTB,0 pin and drag it to the left.

2. Click ‘advanced’ on the microcontroller and set PORTB,0 pin as output by resetting last bit te of te tris register of port B. Then draw the flowcode and save it.

Compiler. KTechlab has a high-level programming language called Microbe. It is basically a compiler for the PIC microcontrollers. Due to its similarity to Basic language, it is also called MicroBasic. It acts as a companion program to KTechlab. PIC16F84, PIC16F628, PIC16F627 and PIC16F877 are the microcontrollers’ Microbe supports.

What users think about this tool 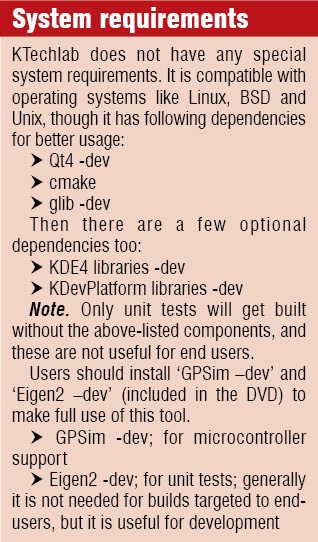 Every designer reviews a tool before using it, in order to check if it would be of any use to him. No one can get a better review than from the users and the developers themselves. Following are the remarks from sourceforge.net, kde-apps.org and edaboard.com communities:

1. “This is terrific program. Comparable to MultiSim by National Instruments. I use it on Kubuntu 9.04 AMD64. I plan on installing it on my laptop with Kubuntu 10.4 to see how it works. Thanks for a great program. Keep up the good work.”

2. “Great application that’s a pleasure to use! It compiled and ran perfectly on SUSE 10.2. Now if we can just get PCB design support, that would be fantastic!”

Following is the way to compile and then install KTechlab on Linux:
1. Use a terminal and navigate to the top-level source directory
2. Run the shell script:

KTechLab should start running at this point. 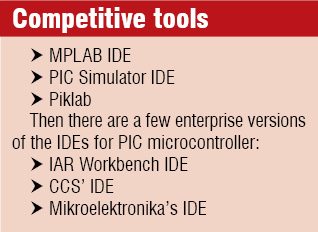 Installing KTechlab on Ubuntu. We can also install this tool on the latest version of Ubuntu. However, we need to use the Debian version.

To download this package we have to install wget:

A claim of dependence will appear as libpopt0, but we can ignore it.
After the installation, exit the Ubuntu Lucid:

Allowing multiple users on same build. An already compiled and installed version of KTechlab allows multiple-user access. In order to do this, run the script:

Then you can launch KTechlab as usual:

The author is a technical journalist at EFY. The article is based on the KTechlab documents
available at sourceforge.net, space-kerala.org and github.com