Not many EDA tools get a chance to celebrate their 40th anniversary. SPICE circuit simulator, first released for the public in 1972, is one among the lucky ones that remains widely used even today. This article talks about the new features in SPICE

Developed by professor Ronald Rohrer of U.C. Berkeley along with some of his students in the late 1960s, CANCER continued to be improved through the early 1970s. When Rohrer left Berkeley, CANCER was re-written and re-named as SPICE, and released as version 1 to the public domain in May 1972.

What does it really do?
Circuit simulation is an important part of any design process. By simulating your circuits, you can detect errors early in the process, and avoid costly and time-consuming prototype rework. You can also easily swap components to evaluate designs with varying bills of materials (BOMs).

Simulating a circuit with SPICE is the industry-standard way to verify circuit operation at transistor level before committing to manufacturing an integrated circuit. Circuit simulation programs—SPICE and derivatives being the most prominent—take a text netlist describing circuit elements (transistors, resistors, capacitors, etc) and their connections, and translate this description into equations to be solved. The general equations produced are non-linear differential algebraic equations, which are solved using implicit integration methods, Newton’s method and sparse matrix techniques.

What’s new in SPICE
While the last stable release of SPICE 3 was in 1992, SPICE has inspired and served as the basis for many other circuit simulation programs, in academia, industry and commercial products.

The integrated circuit industry adopted SPICE quickly, and until the coming of well-developed commercial versions, many IC design houses had proprietary versions of SPICE. Today, a few IC manufacturers, typically large companies, have groups that continue to develop SPICE-based circuit simulation programs. These include ADICE at Analog Devices, LTspice at Linear Technology, Mica at Freescale Semiconductor and TINA-TI at Texas Instruments.

ADICE
Analog Devices, Inc (ADI) is an analogue, mixed-signal and digital products provider for signal processing applications. Inherent in its IC design is its proprietary ADICE simulator for transistor-level, behavioural-level and mixed-level simulation of analogue/mixed-signal circuits.

Advancements in IC technology, computer technology and simulation algorithms drive the evolution of ADICE and the IC simulation environment at ADI.

Choudhury adds, “ADICE, similar to SPICE simulators available in the open market, addresses the requirements of modern analogue/mixed-signal IC design, including fast, accurate simulation of huge circuits, layout extraction of devices and interconnects with regard to high-frequency electromagnetic effects, efficient handling of layout-dependent variation in small-geometry process nodes, and subtle modelling details needed for precision analogue circuits. The solution is a combination of advances in ADICE simulation engine, selective use of commercial simulators, careful modeling of transistors and other devices to meet the demands of high-performance analogue designers, expert use of layout extraction and electromagnetic modelling tools, and a holistic approach to simulation application engineering.” 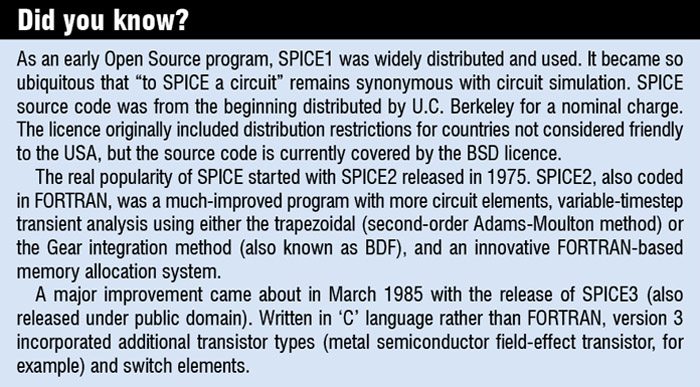 15 Things To Remember While Selecting An IoT Platform