Designers who envision, plan, execute and inspire are the lifeline of an organisation. EFY caught up with experts from various companies, who shared their views on career in analogue design in India. This article focuses on the current scenario, scope, entry-level roles, skills required and industry experts’ suggestions -- Abhishek Mutha 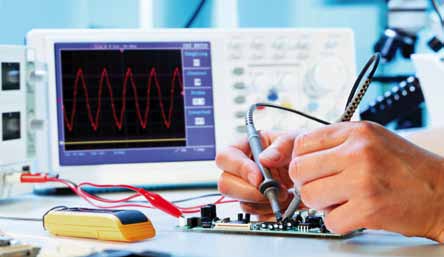 With good understanding and skills in areas such as custom circuit layout, electrical design and simulation, analogue designers plan, organise, execute and document as they steer their organisation towards its goals. The Indian electronics industry looks for designers who are flexible across domains and technologies.

Analogue design scenario in India
Basavaraj Garadi, chief expert, Robert Bosch Engineering and Business Solutions, feels that the analogue design scenario is not that great. He says, “Sadly, India is not where analogue designs thrive. Analogue circuit design is not what excites the hardware designers in India, perhaps because it is not well understood. Designers would rather work on high-speed digital boards, clocking at mind-boggling multi-gigahertz speeds and churning out thousands of MIPS of processing.”

Garadi adds, “Besides, over the years, engineers have resorted to processing analogue signals in digital domain, by converting analogue signals to digital format and converting back to analogue after processing. Forgotten are the days when the only computers available were analogue. Even amplifcation of signals, which was typically perceived as pure analogue processing, is now being realised in binary format, with Class D amplifiers using power devices (MOSFETs) driven as switches rather than in linear mode.”

Engineers have realised the potential of digital processing of analogue signals. “Also working in favour of digital processing is the rapid fall in prices of digital signal processors. Therefore pure analogue board design will not gain any further foothold in India,” says Garadi. However, he points out, “If a digital electronic device is to interact with the real world, it will always need an analogue interface. Therefore in their minimal form, analogue circuit designs would perhaps be restricted to front-end interfaces. This is as far as board designs are concerned. However, IC or ASIC designs offer a different picture, providing a great deal of promise for analogue designers, both in terms of excitement as well as salaries.”

Comparing the Indian scenario with the Japanese electronics industry, Reddy says, “The Japanese electronics industry looks at specialisation and expertise in a single field. For example, if designer starts working on small-signal amplifiers and earns experience in it, he retires from this field only and neve concentrates on any other field. They never come across words like ‘job security.’ This is not the scenario in India.”

Sharing his thoughts on requirements in analogue sector, Binu Raj S., AVP-engineering, Dexcel Electronics Designs, says, “We as a design service company get less than 15 per cent of the requirement in analogue domain. It is a scarce but specialised domain.”

A large number of MNCs have invested heavily in analogue design in their India centres. I also see many niche start-up companies emerging in this space. They plan to develop analogue IP for licensing as well as provide design services. Academia is also acting as a catalyst as many research projects are ongoing in niche analogue areas like power management and high-speed SerDes (serialiser/deserialiser) designs.”

Somashekhar B., technology manager-analogue/mixed-signal group, Semicon Technology–Systems BU, Tata Elxsi, adds, “More of analogue/mixed-signal design work is being outsourced to India, which was earlier done within the semicon product companies as core technology. As there is acute shortage of analogue resources globally, India is seen as one of the preferred countries for analogue design.”

Reddy says, “A design engineer having strong understanding of analogue electronics and capable of handling analogue components, small signals and the sensor to the instrumentation will always sit in a high profile having scope to work in power, digital, RF and instrumentation,” he adds.

Analogue circuit design is often considered a ‘mystical art.’ It requires long practice to become proficient in the dark art of analogue design. The connection between cause and effect is vague with so many physical and electrical interactions between components. A weak ground and some stray capacitance can make designs falter. The PCB layout also weights to a greater part of the analogue equations.