Take a look at the opportunities, scope, perks and skills expected from an engineer looking to work in the FPGA domain, topped with some advice from industry experts in this field -- Abhishek A. Mutha

An increased adoption of field-programmable gate arrays (FPGAs) in the semiconductor industry has opened tremendous opportunities for FPGA engineers. Current usage of FPGA varies from a simple interface logic implementation to FPGA as the main processing device in the system.

Paramita Kapat, head—human resource, eInfochips adds that, “With increased resource size and powerful DSP blocks, processor blocks, transceiver blocks and large on-chip memory, FPGAs play a major role in a variety of domains including video processing, networking, avionics, ATE and as hardware accelerators.” This has increased the demand for competent FPGA engineers in the industry. 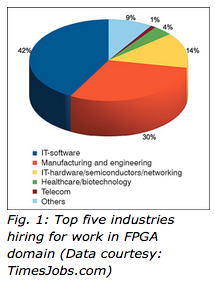 handheld devices to aerospace and military segments. “Hence the FPGA industry offers an immense potential for both the industry and for aspiring engineers to work, learn and grow,” notes Rajesh Chakkingal, lead architect, Mistral Solutions.

On a similar note, Rajesh Choudhary, HR head, Xilinx India informs, “FPGA as a technology is evolving and has become predominant in various domains such as telecommunication infrastructure, industrial automation, aerospace and high-end consumer electronics such as 3D TVs and personal digital assistants. The career scope of FPGAs is also 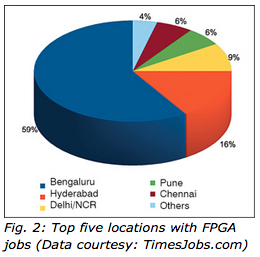 increasing with their increased usage.”

These days, there are various career choices available to engineering graduates as well as postgraduates. With over 20 years of industrial experience, Yogesh Soni, senior technical director, Mattozetta Technologies believes a career in very-large-scale integration (VLSI) is one of the best choices available today.

Although, he says, “It is tough for a fresher to enter 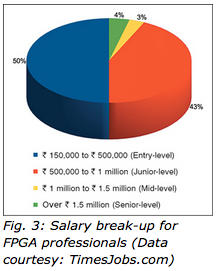 into VLSI as a career, but once you are in, you would have a world-class career. Within VLSI, a career in FPGA is an evergreen choice.” As technology nodes have shrunk to very low level, thereby skyrocketing the application-specific integrated circuit (ASIC) development cost, FPGA provides a very good alternative to quick and faster design, and development for any product.

Multitude of roles
The two broad opportunities in this field are with designing FPGA-based designs and then verification. Both these areas are equally challenging, and require high level of involvement. Chakkingal adds that, “At 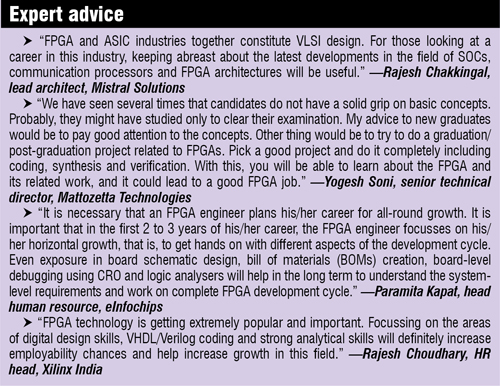 the entry level, engineers are expected to learn hardware description languages (HDLs) such as VHDL/Verilog and use them for register-transfer level (RTL) coding and verification of test benches.”

Also, entry-level engineers can target jobs in logic design/verification in the FPGA application areas. Choudhary says, “Today, many companies are using FPGAs for 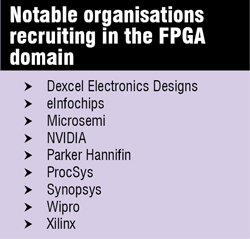 prototyping many ASIC/ASSP applications, hence the opportunities are huge in this field.”

As an FPGA engineer, one is expected to handle design, verification and validation tasks. As a fresher, it is necessary to start with training in HDL and FPGA tools.

“At entry level, it is preferred that the engineer works on verification and validation of the design. Identifying and evaluating various scenarios to test, creating test environment and verifying and debugging the design can offer them a good overview of the development cycle,” notes Kapat.

She further adds, “They can further mature as a designer, by owning and designing less complex modules to begin with.”

There are many other roles available for FPGA engineers, such as IP design for FPGA, IP porting onto FPGA, FPGA validation, system prototyping using FPGAs and silicon validation using FPGA-based boards.

Skills expected
A fresher graduate needs to be strong in basic fundamental areas such as digital electronics, digital logic design (RTL) and microprocessors. A good grasp over languages such as VHDL, Verilog and C is an added advantage. Some firms also expect potential employees to be knowledgeable about digital signal processing (DSP) and communication systems while recruiting them for work in the FPGA domain.

HDL coding skill is a must in any FPGA job. Highlighting the importance of coding in the FPGA domain, Soni says, “If you hate to do coding, an FPGA job is not for you. Besides coding, a good understanding of digital design concepts, logic gates, logic design and verification would help any FPGA engineer to do a good job, to shine and advance in his/her career.”