With renewable energy being all the rage right now, solar literally produces the power to change the world. If you want a career in an industry that’s only going to get bigger, solar may be for you -- MONIKA BHATI

Blessed with one of the best quality and quantity of sun, India offers a huge potential to develop solar photovoltaic (PV) power both for domestic consumption and export. With several new companies from India and abroad starting their solar operations in India, and existing companies committing to expanding their capacity, solar PV power is bang in the middle of a take-off in India right now. The government too has been very supportive to boost the growth of solar industry. In January last year, the Ministry of New and Renewable Energy (MNRE) and Ministry of Power launched the Jawaharlal Nehru National Solar Mission (JNNSM) with an aim to set up an enabling environment for solar energy penetration in the country. The ambitious project aims to establish India as a global leader in solar energy, not just in terms of solar power generation but also in solar panels manufacturing and further development of this technology.

The JNNSM targets 22 GW of installed solar generation capacity by 2022, 100 GW by 2030 and 200 GW by 2050. It aims to achieve grid parity by 2022 and parity with thermal-based generation by 2030. It also aims to install 4-5 GW of solar manufacturing capacity in India by 2017. In the near term, the solar industry is looking to reach the total installed base of about 1 GW. Over the next two to three years, it may achieve 1-1.5 GW of annual installations year-on-year. Providing further impetus to the solar industry, states like Gujarat and Rajasthan have announced their own solar policies.

Here’s why you should think about making a career in this exciting field.
According to a recent KPMG report, solar power can meet 5-7 per cent of India’s total 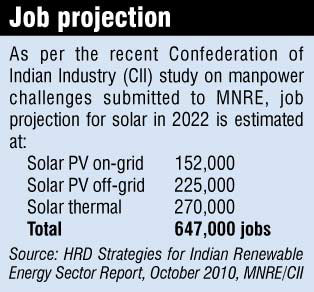 power requirements by 2021-22, up from a negligible portion today. “Solar power can help our country move closer to the targeted 20-25 per cent reduction in carbon emission intensity of the total GDP by 2020, by contributing as much as one-tenth of this target, besides playing an increasingly important role in securing India’s energy future,” says Arvind Mahajan, head of energy and natural resources, KPMG.

Based on KPMG estimates, an average of 43,000 new jobs would be created annually in the period 201722 from the rooftop segment itself. Furthermore, around 42,000 jobs can potentially be created annually in the period 2017-22 from utility-scale solar power installations. The agriculture potential could create more than 38,000 jobs annually in the solar industry from 2017-18. KPMG further estimates that more than 600,000 jobs will be created during 2017-22 from rooftop, solar-powered agriculture pumpsets and utility-scale solar installations alone. Solar water heaters could also create more than 420,000 jobs in this period.

“Hence the solar industry would create close to a million jobs in the period 2017-22, carving a new industry segment like what IT has succeeded to create in the last decade in India,” quips K. Subramanya, CEO, Tata BP Solar.

Solar industry, at the global level in general and national level in particular, is in a nascent stage hovering around 20GW per annum. “It is expected to grow manifold in years to come mainly due to two reasons: increasing concern for climate change necessitating switching to renewable energy from fossil fuels and also concern about the depleting oil reserves,” adds Dr P. Jayakumar, CEO, Arbutus Consultants.

“If you check five years back, job opportunities were not even 10 per cent of what they are today. I personally see 30 per cent growth in this industry in the years to come,” quips Hitesh C. Doshi, chairman, Waaree Group.

“With the launch of the NSM and the huge target which has been set by the government, different companies are trying to engage themselves through either installation of power plants or design and manufacture of solar components, various devices and individual sub-systems required for the power plant. As far as the knowledge base is concerned, one is the engineering aspect of the power plant design and another is the physics of how this power gets generated. So the job opportunities exist in each of these sectors,” opines P.K.Ghosh, management consultant, Agni Power & Electronics. 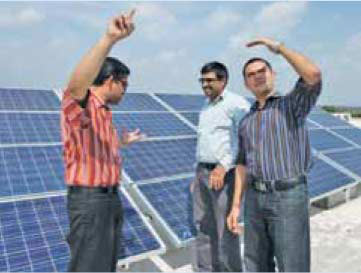