Various automation processes in the industry need control of AC induction motors using AC drives. Presented here is a robust system for switching on/off, varying the speed and direction of rotation of an industrial 3 Phase Induction Motor using VFD and PLC. We use here Delta AC motor drive for its operation.

A simple control panel is wired using an Allen Bradley PLC for demonstration. An extended Intouch wonderware SCADA can be developed also.

An electrical motor is an electromechanical device that converts electrical energy into mechanical energy. In the case of 3-phase AC operation, the most-widely-used motor is the 3 Phase Induction Motor as this type of motor does not require any starting device, being a self-starting motor.

Often in the industry, need arises for controlling the speed of a 3 Phase Induction Motor. Delta’s AC motor drives are able to efficiently control motor speed, improve machine automation and save energy. Each drive in its variable frequency drive (VFD) series is designed to meet specific application needs.

AC drives accurately control torque, smoothly handle increased load and provide numerous custom control and configuration operating modes. A VFD can be used to vary speed, direction and other parameters of a 3-phase motor. We use the 2-wire method for controlling the speed and direction of the motor.

Working of a VFD

The first stage of a VFD is the converter, which comprises six diodes, which are similar to check valves used in plumbing systems. These allow current to flow in only one direction; the direction shown by the arrow in the diode symbol. For example, whenever A-phase voltage (voltage is similar to pressure in plumbing systems) is more positive than B- or C-phase voltages, that diode opens and allows current to flow.

When B phase becomes more positive than A phase, B-phase diode opens and A-phase diode closes. The same is true for the three diodes on the negative side of the bus. Thus, we get six current pulses as each diode opens and closes. This is called a 6-pulse VFD, which is the standard configuration for current VFDs.

We can get rid of AC ripple on DC bus by adding a capacitor. A capacitor operates in a similar fashion to a reservoir or accumulator in a plumbing system. It absorbs AC ripple and delivers smooth DC voltage.

When we close one of the top switches in the inverter, that phase of the motor is connected to the positive DC bus and voltage on that phase becomes positive. When we close one of the bottom switches in the converter, that phase is connected to the negative DC bus and becomes negative. Thus, we can make any phase on the motor positive or negative at will and can thus generate any frequency that we want. So we can make any phase positive, negative or zero. 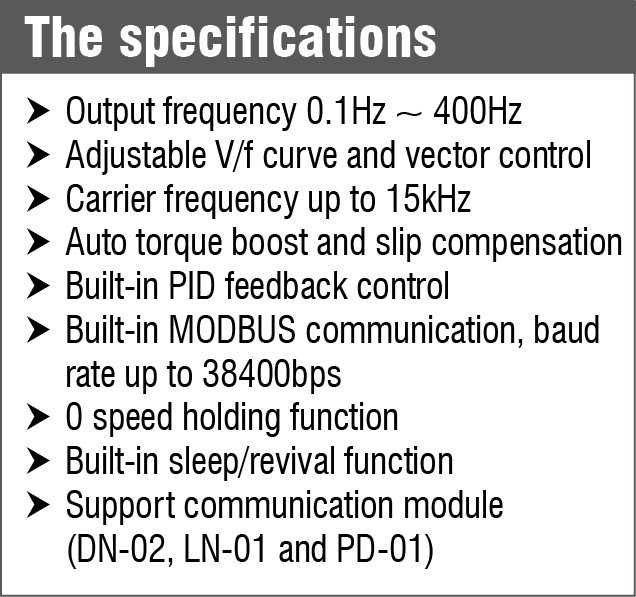 If we want to reduce motor frequency, we simply switch the inverter output transistors more slowly. But if we reduce frequency, we must also reduce voltage in order to maintain V/Hz ratio. Pulse width modulation (PWM) does this.

Imagine, we could control the pressure in a water line by turning the valve on and off at high speed. While this would not be practical for plumbing systems, it works very well for VFDs.

Delta VFD-M is a sensor-less vector micro AC drive. Its compact design is ideal for small- and medium-horsepower applications. M drive is designed to provide an ultra-low-noise operation and includes several innovative technologies that reduce interference.

Note: At any point, press Mode to go to the previous step.

For motor running from external controls, we have three modes of operation; two are 2-wire method and one is 3-wire method. Other than these, there is the default method operable from the digital keypad.

First, carry out a trial run to check all connections.

There are two contacts, M0 and M1. Whenever M0 is closed, VFD goes into run mode. If it is open, there is no rotation of the motor. M1 decides the direction of rotation. If M1 is open, it rotates in forward direction; if closed, in reverse direction.
Parameters for the above mode are set as:

Once all these parameters are set, follow 2-wire mode operational steps for running the motor. 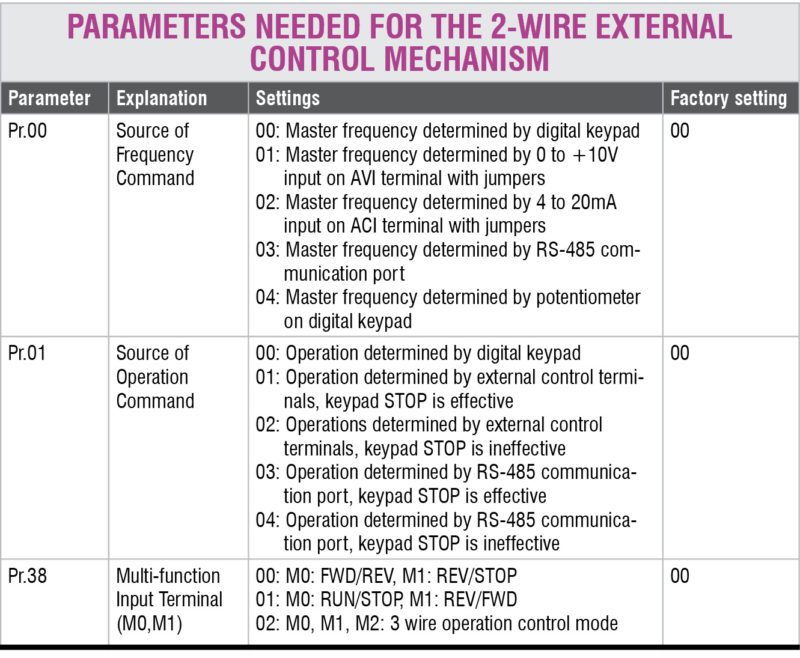 Programmable logic controllers (PLCs) support digital input/output very effectively. So a PLC can also be used to control the operation of a VFD, hence to finally control the connected 3 Phase Induction Motor.

0:0.0/5 is the LED that turns on when the motor is running in forward direction and turns off in reverse rotation.

Joby Antony is masters in computer technology from the USA, and is currently working as engineer-F at Nuclear Inter-University Accelerator Centre (IUAC), New Delhi. He was also a visiting scientist at CERN, Geneva

Akshay Kumar is a B.Tech student at Delhi Technological University, New Delhi, and currently an intern at IUAC