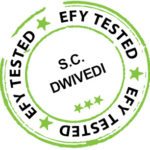 The security system can be used in a restricted area like a farm or as a home security system. When an intruder cuts or interrupts both laser beams at the same time, an alarm sound is generated and an alert call is made to your current mobile phone. 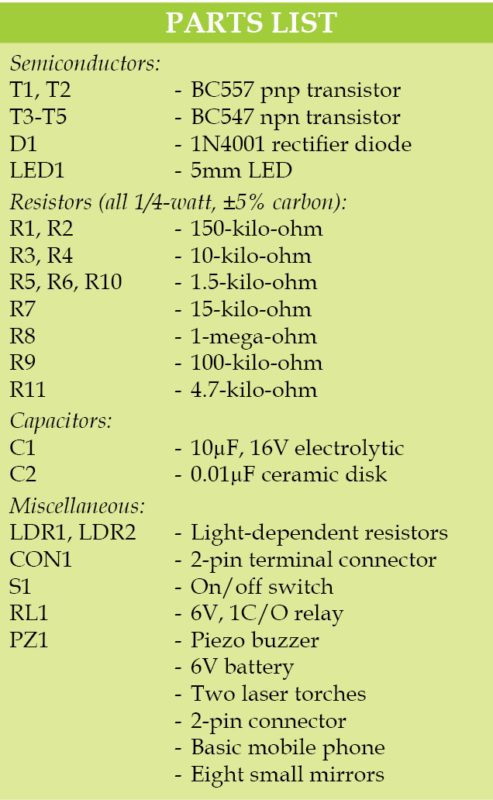 Circuit diagram of the laser security system using a basic feature phone is shown in Fig. 1. It is built around two light-dependent resistors (LDR1 and LDR2), five transistors (T1 through T5), one diode (D1), one NE555 timer (IC1) and a few other components.
T3 and T4 are configured as NAND gate. NE555 is configured in monostable mode. T5 is used to drive relay RL1 and piezo buzzer PZ1. Relay contacts are connected to the old basic feature phone through connector CON2.

When two laser beams falling on LDR1 and LDR2 are interrupted at the same time, T1 and T2 conduct, making T3 and T4 also to conduct. Output signal at collector of T3 is given to trigger pin 2 of IC1 through toggle switch S1. As a result, LED1 goes off and T5 conducts.

PZ1 sounds for a pre-fixed time based on the values of resistor R8 and capacitor C1. At the same time, RL1 gets energised and activates the speed dial function of the feature phone through CON2. The speed dial function is assigned with a specific contact number like your current mobile phone number. You thus get an alert through an incoming call on your phone.

An actual-size, single-side PCB for the laser security system is shown in Fig. 2 and its component layout in Fig. 3. After assembling the circuit on a PCB, enclose it in a suitable box.

The circuit works off a 6V battery or power supply. Refer Fig. 4 for the proposed installation of laser beams and mirrors for the security system.

Switch S1 to off position during installation of the laser beams and LDRs.

The project requires two mobile phones—one old basic feature phone, which will be connected to the circuit, and the other could be the mobile phone you may already be using.

Normally, button 1 on a feature phone is assigned for speed dial function. Open the cover of the dial pad of this feature phone. Solder two wires on the PCB at 1 (Fig. 5). Extend these wires to CON2 in the circuit.

Use Of OLED Technology Is Transforming Automotive Industry