Advances In Motors And Drivers For Wearables

Ever wondered how your mobile vibrates? Let us see. There is a small motor in your phone, which is responsible for shaking it every time you receive a notification. I observed this phenomenon in a Motorola phone by removing the back cover and calling that number. Interestingly, there is a half-cut cylinder (cut along its axis) attached to the motor’s axle that rotates very fast to generate the vibration.

Motion is the main motive behind using motors. In embedded systems an area that has seen extensive use of motors is robots. If you go through the schematics of a humanoid robot, you will probably forget the motor count by the time you are through with the review. Every joint is essentially a motor, with some having more than one.

Let us take the example of the humanoid robot. We would require a multitude of motors for different use cases. For instance, a type of motor would be used for lifting heavy parts of a machine, whereas another for controlled motions of its individual parts. These would then, in turn, require similarly different drivers for their application.

A trend that is catching up in system design using motors is employment of direct current (DC) motors. “Ranging from automotives and fans to wearables, we are seeing an increase of brushless DC (BLDC) motors,” says Hrishikesh Kamat, chief executive officer, Shalaka Technologies.

With their increased employment in embedded system designs, the size of motors has become smaller than ever through continuous iterations and technology advances. Motors and their drivers are moving towards smaller, smarter, safer and faster solutions. “Drivers are coming inbuilt with Hall sensor inputs and back electromagnetic force sensing capability,” says T. Anand, managing director, Knewron Technologies. He adds, “This allows designers to reduce part counts and, thus, BOM costs.”

Drivers can also be integrated with radio frequency chipsets for remote control in home automation and industrial applications, enabling remote diagnostics of motor drives as well.

Kamat says, “Implementation of sensor-less control of BLDC motors is seen in many of the recent applications. Elimination of rotor positioning sensors like Hall sensors not only reduces cost but also increases reliability.” Sensor-less drive is based on detection of back electromagnetic force induced by the movement of a permanent magnet rotor in front of stator winding.

InstaSPIN is another technology that monitors the motor’s flux to determine when to commutate the motor. 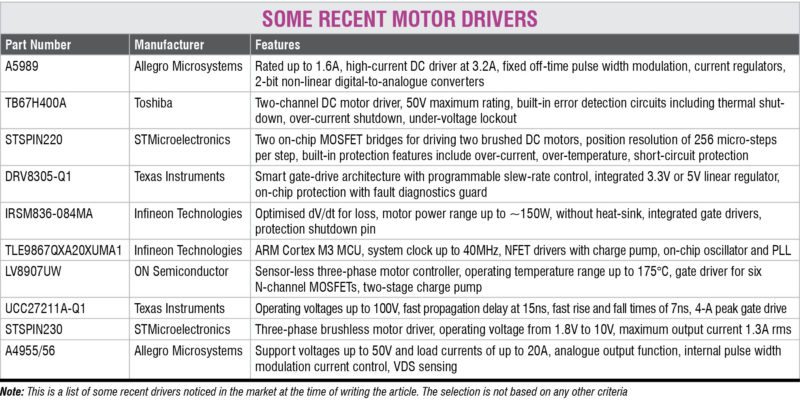 To implement features like sensor-less control, automatic and integrated-state machine logic to control the motor, “it requires highly smart algorithms to control the system,” says Anatya Vallabh, technical sales engineer, Texas Instruments (India) Pvt Ltd. He adds, “These should follow the theoretical mechanism to spin the motor.” Besides, it should take care of practical faults that might rise during operation.

Vallabh explains, “For example, the motivation behind sensor-less control is applicability with end usage.” Naveen Bevara, analogue applications engineer, Texas Instruments (India) Pvt Ltd, adds, “Motors typically include what is called a position sensor, which can identify the position of the rotor (moving part of a motor). Identifying rotor position is essential for control of the motor at various speeds and under changing loads.” 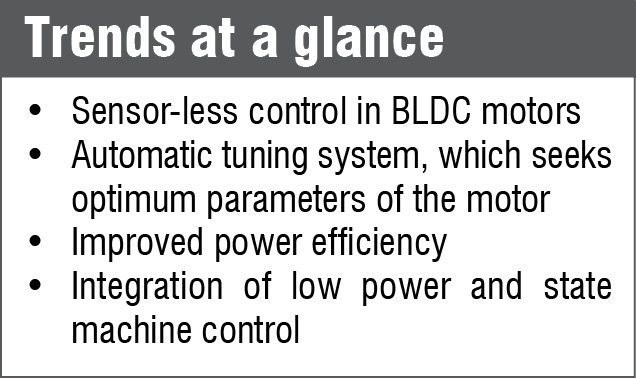 One of the innovative uses of motors in applications today (such as air-conditioners, refrigerator compressors, washing machines and cooling fans) is to drive and control a motor at variable speeds and even turn it off at times to improve product efficiency. The motor must be able to then re-start quickly and reliably 100 per cent of the time. This has allowed manufacturers to improve reliability of their products, improve efficiency by using variable-speed motor technology and eliminate costly position sensors from their systems. 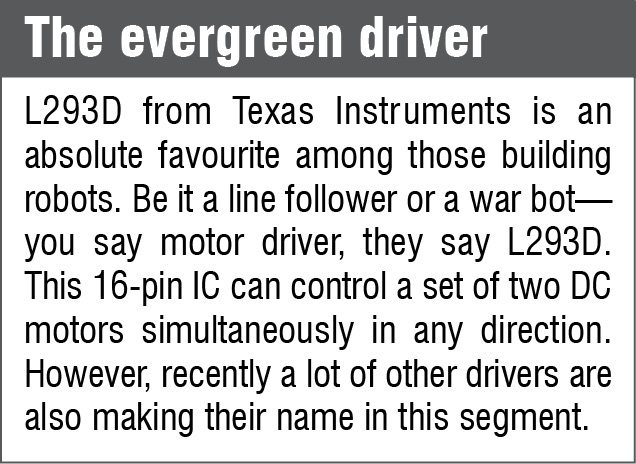 Running the driver in stepper motor application requires tuning. If manual tuning is used, it is very difficult to find the accurate point to set while tuning. Auto-tuning is an intelligent system, which seeks optimum parameters of the motor. Auto-tuning suppresses oscillations, making frictional compensation. It does not require any input from you. The motor will perform a sequence of movements in order to determine the type of load that is controlled and the type of coupling. This tuning covers most applications with good performance.

STSPIN motor drivers from STMicroelectronics can be used in a wide range of applications including robotic positioning systems, printer motors, camera autofocus mechanisms, toothbrush motors or syringe pumps other than the intended purpose of portable and wearable design. Sized at 3mm×3mm, these are being dubbed as the smallest in size.