How to Ensure High Reliability in PCBs for Space Use

This article discusses the critical aspects and characteristics to be kept in mind while designing and manufacturing PCBs destined for use in space products. It also describes the environments that electronic systems face in space. -- Abhishek Mutha

There is a high level of complexity involved whilst manufacturing PCBs, especially boards destined for military or aeronautical applications like spacecraft. There are certain procedures that have to be followed to create PCBs that work with high reliability in any environment. Let us find out more about these boards, the kind of environments spacecrafts operate in, the main characteristics to be measured while creating such PCBs and, finally, also look at the processes followed at the Indian Space Research Organisation (ISRO) to test them.

Why PCBs for space applications need to be top-notch?

About 70 per cent of a spacecraft comprises electronics, and for any electronic device, the PCB is its backbone. It provides mechanical support for the electrical interconnections between components. However, when it comes to space applications, the process of manufacturing the PCB and ensuring its reliability becomes inherently complex.

PCBs targeted for aerospace applications are required to go above and beyond the standard processes and procedures in PCB design, fabrication and assembly. In comparison to previous generations, designs for the military and aerospace sector today demand high reliability. In addition to a 100 per cent fault coverage using techniques such as design for test (DFT), the high RF and the thermal management require special attention with special PCB design and layout techniques.

System reliability plays an important role in spacecraft. Enormous effort goes into the making of a spacecraft, which is made up of a lot of sub-systems involving huge monetary investments. Besides, the users of the spacecraft have high expectations with respect to its performance, as it can cause human as well as material damage in case of a malfunction while in flight.

The components that populate consumer PCBs have tolerances anywhere between 5 and 10 per cent, whereas military or aeronautical standard components have tight tolerances of 1 to 2 per cent. These components are expensive but they are highly reliable, with gold-finish terminations, compared to components for consumer PCBs with tin-lead finishes. The components used for spacecraft cost about 5 to 10 times more than the commercial components. 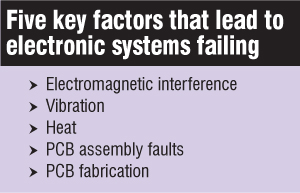 The most common applications are in consumer devices like radios, television sets, cellular phones and even testing equipment. These are called consumer boards. The materials used to make such boards are less expensive. In this case, the marketing factor is much higher than the reliability factor. It is not so important for the board to have very good and consistent electrical properties, since consumer devices are typically used and later discarded. Professional boards are used for technological developments where the reliability is the most important factor. Hence, when compared to the PCBs made for the consumer sector, these are made with much better quality material. Also, they have tighter electrical specifications and are fabricated using controlled fabrication techniques.

High-reliability boards are mainly used in the military and aeronautical sectors for strategic applications. These PCBs cannot afford to fail under extreme conditions and critical applications. They must provide the best performance, have extremely good electrical properties and a high-quality base material. They must be produced in a tightly controlled manufacturing process and should be able to work in harsh environments.

The different environments that spacecraft PCBs must operate in

PCBs in spacecraft basically experience three kinds of environments—ground, launch and the space environment. In the ground environment, i.e., during testing and fabrication, the PCB undergoes a lot of cleaning, thermal cycling, testing, soldering and other such processes. During the launch stage, there is heavy vibration due to the yawing and pitch spinning of the launch vehicle. Consequently, there is a lot of acoustic noise that is transferred to the structure of the vehicle, which is passed onto the electronic components. PCBs supporting such electronic packages should be able to quench the vibrations such that they are not transmitted to the components, causing damage to the leads.

These are important factors to be kept in mind while designing PCBs for launch vehicle programmes or any space programme. Once the launch is successful, the spacecraft has to withstand the forces of the space environment, which are much harsher than the ground or launch environment. The electronic packages incorporated on to PCBs used in spacecraft will face a lot of radiation and sudden changes in temperature.