What You Ought to Know About Designing Memory into Embedded Systems

Dilin Anand is a senior assistant editor and Anagha P. is a technical correspondent at EFY

The era of data and information explosion is upon us. A 10.2cm (4-inch) iPhone today has 128GB of storage, which is far more storage than that of an average desktop computer from 15 years ago.

Sandisk, Samsung, Toshiba, Micron and SK Hynix are responsible for almost all NAND flash memory manufactured, including its many varieties—and, there are a lot of varieties. Storage requirements vary with each project and design constraint, and there is no one-size-fits-all solution here.

So what elements does a modern engineer have to consider while selecting memory? Let us find out. 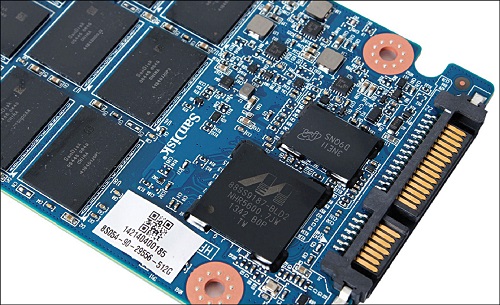 Flash Memory is designed to be used up…”

What level of endurance will be suitable for your project? You will need to figure out the life of your product in consumers’ hands in order to answer this question. “In the smartphone segment, for instance, typical usage is for three to four years. In such cases, triple-level cell (TLC) provides the most cost-effective kind of memory,” explains Vivek Tyagi, director, business development, OEM and enterprise, SanDisk India.

Single-level cell (SLC) technology has the highest endurance, in that it can be written up to 50,000 times. But because it can only store one bit of data per cell, it costs more per gigabyte than other technologies. Multi-level cells are cheaper and can store more memory in the same cell-size, with the drawback that you will have to work with reduced endurance. TLCs are the latest and hold three bits per cell.

However, if you are building an industrial project or a device that is expected to work for eight years or so, the engineer has to check the endurance of the memory and see whether it meets the requirements put forth by the customer or user of that design. In most cases, since the industrial project might not have to deal with multimedia files, it need not have huge amounts of capacity. Thus, this trade-off can be used to opt for SLC.

Typically, when you buy an eMMC flash, your vendor knows about endurance and will provide you with a slew of multiple choices based on your demand. If you are looking at TLCs, Samsung and SanDisk are the only vendors who have it as of now. Other vendors are expected to fall suit later this year. 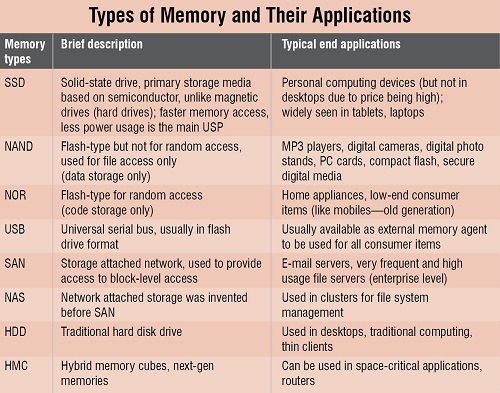 Getting a hold on performance
Depending on your product design, you may have a set requirement for the time that your device can take to read or write onto flash. These are read-access and write-access times.

Whether you are using apps like WhatsApp, or imaging or recording videos, you are running all these on the flash memory of your smartphone. Because these activities are run simultaneously, it is very critical to have excellent read and write times on your device. In other applications, like the Internet of Things (IoT) gateway or a set-top box, it might not be so critical.

Playing just a movie might not be very demanding on the memory, but multiple usages, like imaging, music and other running applications, create a critical demand for the need for speed. Companies like SanDisk differentiate their product lines according to performance and endurance. Their iNAND products range from standard to ultra, and finally extreme for highest performing chips.

Understanding what capacity your project really needs
Industrial devices do not usually deal with memory-heavy multimedia files or videos, and hence can make do with cheaper lower-capacity TLC memory. Alternatively, in those cases where the industrial device requires higher performance, it can move on to get an SLC NAND memory instead of TLC.

On the other hand, customer requirements for smartphones and consumer electronics are growing to 128GB for smartphones launched this year. In these cases, TLC is the better choice over SLC because the designer can access higher capacities of memory with the same budget constraint. Moreover, the end-user will value the size of the memory on the device quite heavily while making a purchase decision.

Memory capacity requirements are also based on the kind of operating system (OS) that you intend to run on the device. Microkernels are designed to work using minimal system resources and can be used with limited memory capacity. On the other hand, a full-featured OS requires more memory and plentiful system resources. 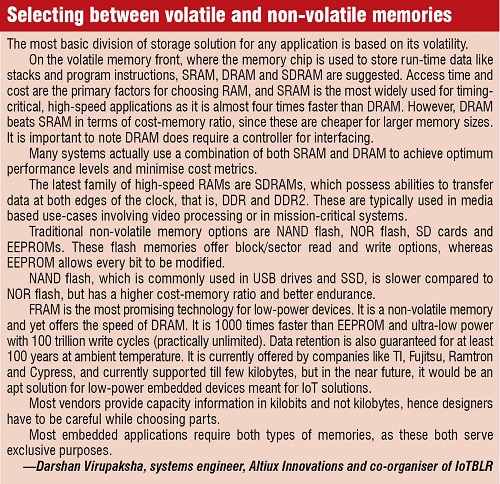