Reference Design For An Oxygen Concentrator

Reference design for an open-source oxygen concentrator based on molecular sieve and pressure swing adsorption technique.

The COVID-19 pandemic changed the world in many ways, it also showed how the healthcare system can crumble in even the most developed parts of the globe and medicines, equipment and other amenities can run in short supply at any time. Similarly, the oxygen supply in hospitals also suffered a hit not because of a lack of production but due to logistical challenges. Now, many hospitals in cities do have their own oxygen concentrator, but rural hospitals or small clinics in developing countries are still not equipped enough to tackle a big wave of an outbreak. 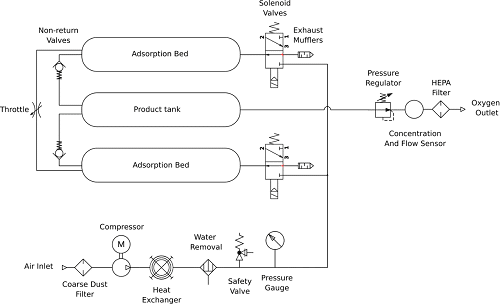 It has a simple design and is optimized for fast production. The module weighs about 20kg and the measures 550mmx400mmx300mm. All the software of the reference design is released under the GNU General Public License V3, all the documentation under and hardware are under the CERN Open Hardware License.