This article describes a method for making an ESP8266-12E/F module programmer and also discusses the support circuitry required for real-time applications.

NodeMCU board is a development kit that consists of ESP8266 Wi-Fi-enabled chip and many other support circuitries. It is a popular board, which is handy to work with Wi-Fi-related projects. But when product development and testing stages are completed, the whole NodeMCU board is not required—only ESP8266 chip is required for the final product. This reduces the overall cost of the product, lowers power consumption, and ensures a smaller PCB footprint and code security.

The process of designing and building a project using ESP8266 can be broken down into two distinct steps: hardware and software. Hardware revolves around building support circuitry to GPIOs, while software revolves around writing, compiling and loading the sketch into the chip. Such application again involves two stages: development and deployment.

During development stage, you need a software development kit (SDK), like Arduino IDE, with ESP8266 Board Manager and supporting libraries, or the newer PlatformIO IDE, for writing the software.

During this stage, only ESP8266 chip is required in the final product.

The issue now is to figure out how to use ESP8266-12E/F (or ESP-12E/F) chip and still be able to load the code and develop the software without NodeMCU or similar board. For that, first we need to know the physical size, working, booting and flashing process of ESP-12E/F chip in detail.

There are also three SMD resistors on the breakout board (Fig. 3). On the obverse of the board, there is space for fixing HT7333A, a low-drop 3.3V voltage regulator. Alternately, an external 3.3V regulator may be used for powering the circuit.

ESP-12x can boot up in three different modes, as shown in the table. We are interested in the first two boot-up modes.

As can be seen from the table, at boot-up, GPIO2 and Ch_PD/En pins should always be held high, while GPIO15 should be held low. While using the standalone ESP-12E/F chip, add 10k/12k pull-up resistors on Ch_PD and GPIO2 pins, and pull-down (10k/12k) resistors on GPIO15 pin. Note that, pull-up and pull-down resistors are prebuilt on the breakout board.

Reset pin and GPIO0 should normally be held high but connected to ground through micro switches, as shown in the circuit in Fig. 4. This is the minimum configuration necessary for using ESP-12E/F module. Every project built around this module should have these five 12k resistors. These resistors are prebuilt on NodeMCU board.

A manual ESP-12E/F programmer is shown in Fig. 4. For manually flashing any sketch/code to ESP8266 chip, first put it in flash/programming mode step-wise as follows:

While the above process requires manual intervention every time new software is flashed, we need the convenience of loading the software code similar to the experience of using NodeMCU. This process can be automated by using data terminal ready (DTR) and ready-to-send (RTS) signals of the USB-to-UART chip, which are used for asserting Reset and Flash (GPIO0) pins on ESP8266 chip.

RTS signal on FT232x USB-to-UART module is available on a separate pin, as shown in Fig. 5. For ease of use with the programmer, mount male header pins to the module where all the required outputs (holes) are available. An optional serial adaptor, consisting of six pins, is mounted horizontally on the module, rather than vertically.

Automatic ESP-12E/F programmer circuit is similar to the manual programmer discussed above. RTS signal is used for resetting ESP8266, while DTR signal is used for putting the chip in flash mode. T1 and T2 are used so that ESP8266 is not reset when both DTR and RTS signals are low. On detecting upload command, ESP module is automatically put in flash mode, and a new sketch can be uploaded to it seamlessly. In the absence of upload command, ESP-12E/F starts in normal mode, and the programmed ESP-12E/F board can be tested or used in an application.

To test ESP-12E/F board, a simple LED blinking application is presented in this article. The software code (NewBlink.ino) is written in Arduino programming language.

How to use the programmer

Female Berg strip connectors are used for plugging in ESP8266 chip and FTDI board (FT232 module) on the programmer board. Mount the modules and connectors on the PCB. Make sure that the modules are plugged in the correct orientation. 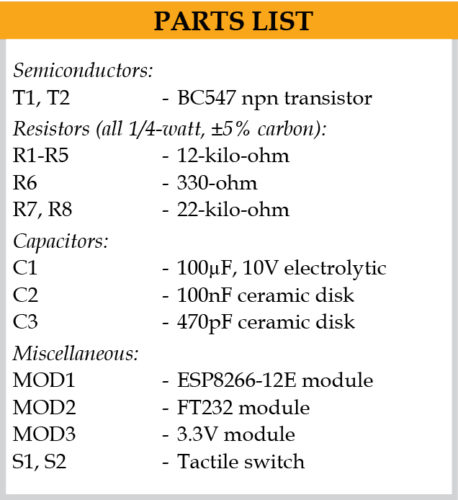 Now, connect FT232 module to the computer via a USB cable. Open Arduino IDE and write your code, or open the existing code stored in your computer. Here, you just need to open the code (NewBlink.ino) of the LED blinking application.

Select the correct Com port in Arduino IDE and set the board as NodeMCU 1.0 (ESP-12E Module). Check that the upload speed is 115200. Compile and upload as you would normally do using NodeMCU. Built-in LED (on GPIO 2) on ESP-12E/F board will start blinking on successful upload.

The programmed ESP-12E/F module can be unplugged from the programmer and shifted to your project-specific board. You now have a cheaper and smaller version of NodeMCU ready for deployment.

Ashok Baijal is an electronics hobbyist, and an old contributor to Electronics For You magazine.