Voltage dips in mains supply make fans run very slow, leaving you sweaty through hot summers, especially if you don’t own an air-conditioner (AC). Voltage may also dip because of an AC drawing a large current, causing the fan to slow down. The so-called fan regulators fitted on the switchboard for speed control merely reduce the fan speed, not increase it. Earlier, regulators used to have resistors that got connected in series with the fan to drop the voltage and hence the speed. These had a rotating switch with steps 1 to 5 to set the speed below normal, and were fitted on the panel board along with the fan switch, light switch and other power outlet sockets.

Nowadays regulators use triac to slice the AC waveform and thereby provide an effective drop in voltage and hence speed. These regulators are small in size and can be fitted along with switches compactly.

Usually, fans run at maximum speeds of around 300rpm, but at low voltages, the speed drops by more than 35 per cent. Ceiling fan motors have about 18 poles or more. The full or synchronous speed of the fan motor is given by:

where ‘f’ is the mains supply frequency and ‘p’ the number of poles. The running speed is much less than this value.

Thus a fan’s maximum speed can be increased only by increasing the frequency of the alternating current supplied to the fan. Increasing this frequency to 60Hz or even 65Hz will make the fan run much faster and produce a good air throw.

Increase in frequency does not affect the fan’s motor much. Actually, at the increased frequency, the magnetic flux density in the iron of the motor reduces, and that is good for efficient working of the fan’s motor. The magnetic power loss does not increase much.

Thus, a method is needed to provide variable-frequency mains voltage derived power for the fan. This power has to be generated in as compact, economical and simple manner as possible.

There are power modules available for varying the speed of induction motors. These use insulated-gate bipolar transistors and are quite expensive.

The best method for generating variable frequency in the range of 45 to 65 Hz is pulse-width modulation (PWM). Pulse widths change as per the sine waveform shown in Fig. 1.

When pulses of current pass through the fan’s inductive winding, the current averages to sinewave shape. Pulse discontinuities get filtered by the fan inductance. To generate the sine wave, two such pulse trains are required, one for the positive half wave and the other for the negative half wave.

For example, to generate a 60Hz waveform, each half cycle is 8ms long. In this time, you have to produce a pulse sequence. If you use 16 pulses for one half cycle (actually, we use much more), the time for each pulse is 0.5ms. In this time, the duty cycle or pulse width will vary from 0.1ms to 0.45ms in accordance with the sine wave shape. Such a waveform is shown in Fig. 2. It shows the PWM pin output waveform from PIC16F73 microcontroller for generating one half cycle of a sine waveform of about 60Hz frequency. The pulses are so close that their widths cannot be seen individually. The sine wave peak is brighter, as the width is greater in the middle. 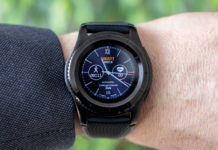 Smartwatches And Wristbands To Keep You Fit