Make Your Own Group Messenger

Often, we communicate within a known group of office or friends using short key words or phrases. This group messenger can be useful to such small groups for whom a keyword is sufficient to understand the message. The display shows current date and time by default when there is no message and serves as a decorative piece on worktable.

This messenger can hold up to ten messages. On receipt of eleventh message, the oldest message is deleted and the latest is added to the list of messages, using the first-in-first-out principle. It may be used by up to eight persons to communicate with each other using keywords.

Circuit diagram of the group messenger is shown in Fig. 1. It comprises a 40-pin AVR microcontroller (ATmega32), a long-range wireless transceiver (HC-12), an RTC IC (DS1307), and a 5V regulator IC (7805). A 9V or 12V DC adaptor, or a battery, may be used as power supply for the circuit. All the switches ES1 through ES5 and SS1 through SS8 are tied to a 470-ohm resistor (R28) to avoid over current flow through any pin of the microcontroller port.

ATmega32A has the required features for this project. It has 32kB flash program memory to store the hex file, 1kB EEPROM to store usernames, 2kB internal SRAM to run the program and hold the values of variables/buffers, two-wire serial interface for RTC IC DS1307 interface, programmable serial USART for HC-12 wireless transceiver, and 32 programmable I/O lines for various switches and other outputs/indicators.

HC-12 is a 5-pin, small-size (28mm ×15mm×4mm approx.) wireless transceiver with antenna. It uses USART port for communicating with the microcontroller (MCU). It has 433.4MHz to 473.0 MHz carrier band with multiple channels to set, with a total of 100 channels with channel stepping of 400kHz, and works on 433.4MHz by default. The maximum transmitting power of the module is 100mW (20dBm). The data sheet indicates that it can communicate up to 1000 metres at 1200 baud rate, and 600 metres at 9600 baud rate (by default), when both transmitter and receiver are placed without any obstruction in between and are visible to each other.

The built-in MCU performs the communication with external device and no programming or configuration is required for basic use of the module. To change any parameters, its SET pin has to be pulled low and AT commands used. By default, the on-board pull-up resistance makes the SET pin high and transmits and receives the wireless data (even without any connection to SET pin).

DS1307 is a popular real time clock (RTC) chip with built-in date and time format and calendar. It uses a 32.768kHz crystal to generate an accurate clock pulse and communicates using a two-wire interface (TWI, also called I2C) with the microcontroller. It has to be powered with 3V battery permanently to run the date and time internally. A 5V DC power supply is required to read or write the date and time from the chip.

After assembling the circuit on PCB, insert the microcontroller, HC-12 module, and the RTC IC in their respective places. Put the 3V battery in its holder and connect LCD1. Use SJ1, SJ2, and SJ3 shorting jumpers to set an ID number for the board. Switch on power using switch S1 after connecting 9V or 12V DC power supply. Power LED1, seconds LED4, and back-light of LCD1 will start glowing. 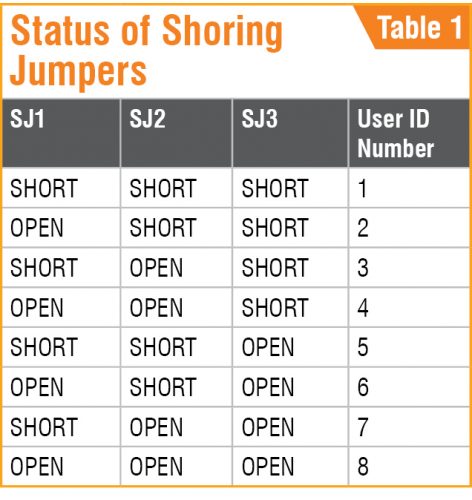 The program goes through self-test and checks the connections to the external modules. The sequence of testing is as follows with the blinker LED2 blinking for checking every component:

At least two such modules (PCBs) are required to send and receive a message in the project. A maximum of eight modules can be used to communicate with each other.

An actual-size PCB layout for the group messenger is shown in Fig. 2 and its components layout in Fig. 3. Assemble the circuit on the PCB. Connect 9V or 12V DC power supply across CON1 and 3V battery across BATT.1. Before inserting MCU into the PCB, do not forget to upload GroupMessenger.hex into it.

Use at least two modules for testing; one (Module1) as transmitter and second (Module2) as receiver. The author’s proposed panel for group messenger is shown in Fig. 4.

Buttons SS1 through SS8 are selection buttons to select username, first set of the message and second set of the message consecutively. The same eight buttons are used for selecting usernames and two messages assigned to each button. Each button is used for one username and two messages, which are selected by pressing the same button consecutively.

To send a message, first select the username (actual user ID number of SET2 or receiver) by pressing any one of the selection buttons SS1 through SS8. The selected name is displayed on LCD1. Press the same button again to send the required message.

The username and ID are displayed on first row of the LCD. On pressing the same button to select the message (say, Contact me) it appears on second row of the LCD. Now, press ES1 (send button) to send the message. Confirmation of message dispatch will then appear on the LCD followed by time and date.

Module2, which has the user ID_NO selected by Module1 for sending, receives the data, processes it, and displays on the LCD screen continuously until any button (SS1 through SS8 or ES1 through ES5) is pressed by the user. Also, the new-message LED3 glows and a beep is heard whenever a new message is received. Other sets, which do not match the ID_NO, discard the message.

To view all the received and stored messages, press ES3 (for next received message) and ES4 (for previous received message) buttons. To delete any message after reading, press ES2 button. On pressing ES3 and ES4 buttons, a small beep is heard if end of messages is reached.

The following usernames and messages are defined in the code (GroupMessenger.C). You can change them as per your requirement. Then compile the code using AVR Studio 4 (or above) and write the new GroupMessenger.hex file to the microcontroller.

The following messages are defined in the code. The length of a message should not exceed sixteen characters, otherwise the message will be truncated in the receiver’s LCD.

Fayaz Hassan is a manager at Visakhapatnam Steel Plant, Visakhapatnam, Andhra Pradesh. His interests include MCU projects, mechatronics and robotics.