Speech Recognition is an important user interface enhancement for a variety of devices, ranging from smartphones, voice-controlled entertainment devices in the living room to hands-free conversing in automobiles. The idea behind speech recognition is to provide a means to transcribe spoken phrases into written text. Such a system has many versatile capabilities.

From controlling home appliances as well as light and heating in a home automation system, where only certain commands and keywords need to be recognized, to full speech transcription for note keeping or dictation. Imagine a humanoid which can interact with you. It is surprising, right?

In this article, we present a humanoid based on Raspberry Pi which can hear, see and speak. Yes! It can resemble a friend talking to you and performing some operations which you convey him to do. It takes input from you through speech and recognizes what you’ve spoken and performed certain intelligent tasks. It can interact orally with speciﬁc voice commands uttered by the user through a headphone or speaker connected to its audio jack. 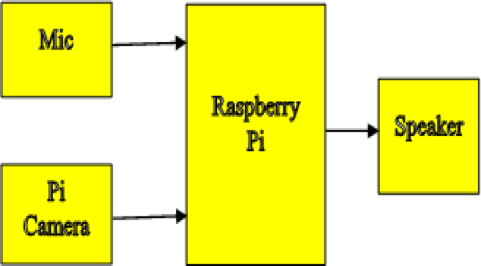 The block diagram consists of a Raspberry Pi, Microphone, Speaker and a Pi Camera module as shown in Figure 1. This provides three senses of intelligence. A user can make his work done by just speaking to the humanoid. This entire module can be placed in a humanoid and user can give a command to humanoid through speech which is recognized by Raspberry Pi and performs the necessary operation.

When the user speaks the predefined command, the microphone detects the voice and sends it to Raspberry Pi. Then raspberry pi detects the uttered command using pocketsphinx and performs necessary actions which are defined in the shell script (attached below).

Update and upgrade Raspi-related software using the commands below and reboot your Raspberry pi.

Initially you need to setup and properly configure alsa, then you can just build and run pocketsphinx

Check your microphone is visible or not and if on, note the USB extension of it.

If you want to receive output through 3.5mm jack then don’t alter any line. Otherwise change following line

Download Sphinx latest version and extract the files as below,

Download Pocketsphinx latest version and extract the files as below,

Run the pocketsphinx to check it,

The Pocketsphinx provides the tools for building language model by providing corpus database as shown in Table 1. The trained models are then used for the task of recognition. The recognized speech commands are used to do tasks or control a humanoid. Speech synthesis is implemented for necessary interaction between machine and human which allows machine to speak. Initially, the necessary commands are built in a text file (corpus). This text file is used to train the language model. Go to the page. Click on the Browse button; select the corpus.txt ﬁle created in the previous step, then click COMPILE KNOWLEDGE BASE.

A page with some status messages will appear, followed by a page entitled Sphinx knowledge base. This page will contain links entitled Dictionary and Language Model. Download these ﬁles and make a note of their names (they should consist of a 4-digit number followed by the extensions .dic and .lm). Now the language model can be tested with Pocketsphinx with the following command.

Here 0092 is the number obtained for our model. It will be usually diﬀerent for diﬀerent models. A lot of diagnostic messages appear, followed by a pause, then READY. At this stage, commands can be uttered. It should be able to recognize them with reasonably good accuracy. 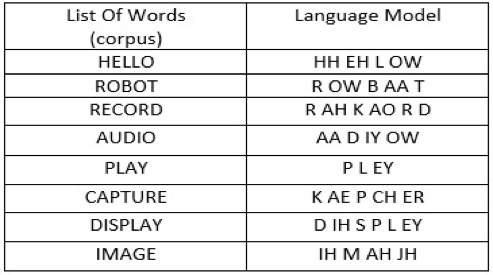