Many modern lighting applications need millions of colors. That is why we are finding RGB (Red Green Blue) LEDs all around us – in our phones, traffic lights, cars, advertising signs, and even our home. RGB LEDs pack three LEDs in one. In RGB, the “R” stands for red, the “G” stands for green and the “B” stands for blue. When these three primary colors are combined in an appropriate proportion, we can create any color our heart desires out of the million colors available in the rainbow.

RGB LEDs can be driven in various ways such as LED drivers or General Purpose Input/Output (GPIO) pins of a microcontroller. If you wish to use RGB LEDs in any of your projects, here are some reference designs which discuss how to drive these LEDs in applications as simple as indicators requiring just one RGB LED to complex applications such as architectural lighting and portable projector. Let’s get started:- 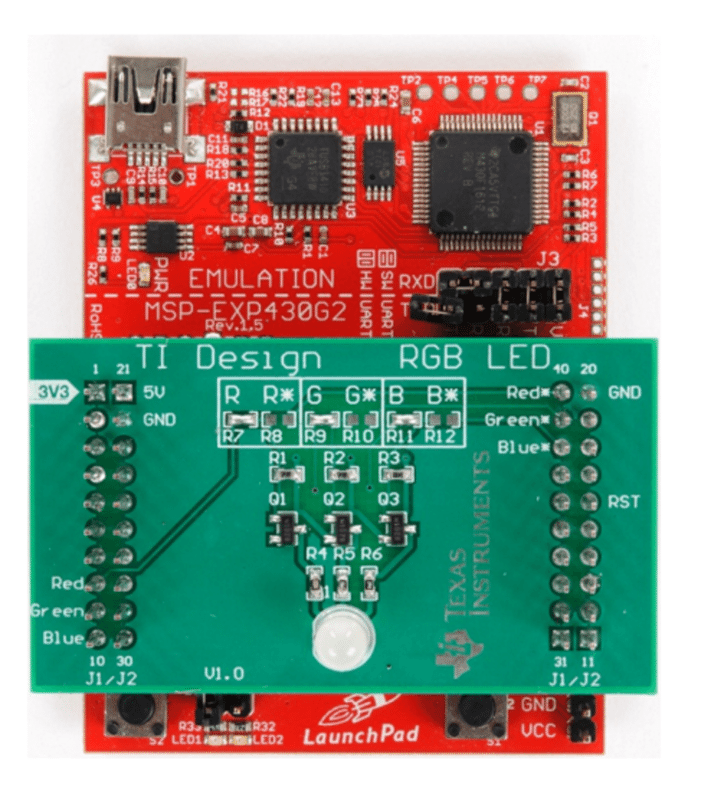 Here is a reference design that offers a solution to control a RGB tri-color LED. The design can be used where multi-colored LED indication is required. The design uses P-FETs to source LED current directly from VCC supply. Other features included are an independent control of color and brightness, support for 512 unique colors and 50 brightness levels, and a serial interface to externally control the RGB LED. The design uses software PWM generation using the MSP430G2553 MCU from TI. More on this Reference Design

This reference design uses the ADP5520 LED Driver to drive up to 6 LEDs in series and a RGB LED. A microcontroller sends the signal to the LED driver ADP5520 using the I2C bus to show backlight fade in/out, backlight dim, ambient light sensing, and RGB fun-lighting features. More on this Reference Design

This is a reference design for a 6A step-down LED driver for a portable projector. The LED driver uses the MAX16821, a PWM HB LED driver to step-down a 10V to 15V input supply voltage to drive a constant current to an LED with a 4.5V to 6V forward voltage. This circuit drives a single LED and three MAX16821 devices are required to drive RGB LEDs. This design requires the LED current to rise/fall within 1µs during PWM at a 6A LED current. The design includes the circuit specifications, circuit schematic, and circuit description and performance. More on this Reference Design

This reference design describes a multi-color LED lighting control solution by using the MC9S08AW60 Microcontroller. The MCU allows easier development of code for LED control applications, architectural/entertainment lighting or LCD backlighting. The system consists of a MCU control board and a LED driving board. The separated LED light-box with driving circuitries is also available as a whole demo kit to demonstrate how to do the color mixing and see the visual effects on changing different type of parameter settings. The MCU is responsible for controlling timer channels for the RGB LED color PWM output and communicating with the host PC for receiving command and data input/output. More on this Reference Design

This reference design presents a low-cost solution to add fully-controlled RGB LEDs into any type of design. Complete control over RGB LEDs parameters including – color, blink rate, brightness and breathing (turn on/turn off speed) is allowed. Using an SPI interface and software GUI, users can control all four RGB LED control functions from a MAC or Windows PC via a USB cable. Documentation with schematics, user guides, and more is available. Hardware evaluation board options are available to test and evaluate the RGB LED reference design. More on this Reference Design

This document describes how to drive RGB LEDs, how to calculate a power dissipation,
how to design an over temperature protection, how to use a software PWM modulation and
why over voltage protection should be implemented for RGB LED driving application. This reference design can drive super high brightness multicolor RGB LEDs with current up to 700 mA per LED. Different colors can be generated by controlling the power to red, green and blue LEDs. In this application, the microcontroller ST7FLITE09Y0M6 from ST Microelectronics provides three software PWM signals for LED drivers STP04CM596 so the color can be regulated. The LED over temperature protection is designed to limit power delivered to the LED automatically to prevent LED overheating. More on this Reference Design