This project can make life easier for bedridden patients and older people as their voice command can trigger the control section that adjusts their bed’s position. It can even control home appliances like lights, fan, AC, and TV, based on the command. Even children can operate the lights at night using voice commands without their parents’ assistance.

There can be an option for text commands instead of voice commands. The proposed system is user-friendly, and no technical assistance is needed for its operation. The author’s prototype is shown in Fig. 1.

A wireless headset worn by a person transmits the person’s voice to a smartphone that uses Google Assistant app. The app has voice recognition software for interpreting and translating the voice command into digital data that is understandable by the microcontroller to do the required task(s). The control section includes microcontroller with integrated Wi-Fi, relay, and associated circuitry.

Block diagram of the system is shown in Fig. 2 and functional block diagram of the developed system is shown in Fig. 3. The system receives voice commands through Google Assistant running on the smartphone. If the command is valid (for instance, Light On), the ‘If This, Then That’ (IFTTT) applet will send the web service request to Blynk server and convert it into digital data, understandable by the microcontroller, and transfer the data to microcontroller wirelessly through Wi-Fi and actuate the device as per the voice command.

As shown in the circuit diagram in Fig. 4, the system uses an ESP32 board (Board1), which has a microcontroller integrated with Wi-Fi transceiver. When it gets voice command, it enables the relay driver circuitry. In this example, 5V relays are used to switch on/off light, fan, and TV. (A 3-channel relay module may be used in place of individual relays.)

Whenever a valid command is received by ESP32, the program triggers a high or low signal to its GPIO pins connected with relays, which control the home appliances. The servo motor is used to change the bed’s back-rest position up or down. 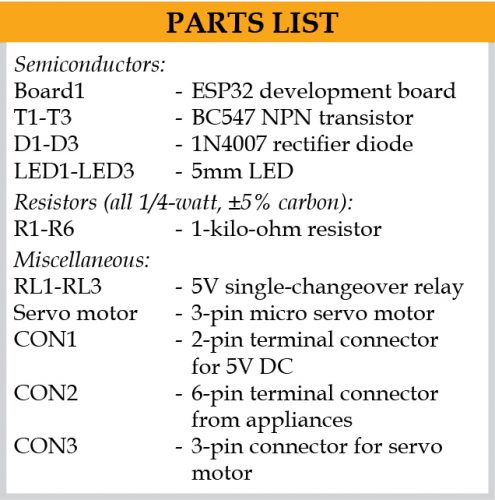 The software, along with Google Assistant app, involves programming of ESP32 using Arduino IDE, configuring Blynk server, and IFTTT applets in the smartphone.

The Blynk app can be configured using the following steps:

Download this zip file, extract it, and then copy this library file to Arduino library files. After installation, you can find your Blynk library file → examples → Blynk → Boards_WiFi → ESP32_WiFi.

For controlling the appliances over the Internet using Google Assistant you need to do the following:

Next, activate Google Assistant app from your mobile phone, so that it is running in the background. Now, you can control the appliances either from your Blynk app with your finger or by just giving voice command to switch on/off the devices. For servo motor, you can use voice command such as “bed up” for the servo motor to turn 90 degrees to lift the bed’s backrest. When you say, “bed down,” servo motor will turn to 0-degree position to bring the bed back to normal position.

Flowchart of the project is shown in Fig. 8 and the source code (bedridden.ino) is listed below:

S. Maheshwaran is an electronics hobbyist. His areas of interest include automation, embedded systems, and robotics