This is a simple “Weather Station using STM32 with ThingSpeak IoT” powered by STM32 ARM Cortex (Blue Pill), this system detects environmental parameters such as temperature, humidity, and Soil Moisture. DHT11 is a Temperature and humidity sensor that as the name implies is used to measure the atmospheric temperature and humidity in a particular environment or in a confined closed space and a Soil Moisture Sensor is used to measure the Soil Level on the Earth.

Now how to interface the popular DHT11 Temperature, Humidity sensor, and Soil Moisture Sensor with STM32 microcontroller using Arduino IDE as shown below Block Diagram. For those who are new, the STM32 also known as the Blue Pill development board consists of the STM32F103C8T6 microcontroller from ST Microelectronics. It is a 32-bit ARM Cortex M3 controller with a high clock frequency suitable for high-speed and power constraint applications.

The main elements used in this project are

The detailed description of each element is discussed here as follows.

As shown below in Figure 5 the real view of the Blue Pill Controller. These boards are extremely cheap compared to the official Arduino boards and also the hardware is open source. The microcontroller on top of it is the STM32F103C8T6 from STMicroelectronics. Apart from the Microcontroller, the board also holds two crystal oscillators, one is an 8MHz crystal, and the other is a 32 kHz crystal, which can be used to drive the internal RTC (Real Time Clock). Because of this, the MCU can operate in deep sleep modes making it ideal for battery-operated applications.

Now let us look into the specifications of this Microcontroller Table-1.

The working principle of the project is to measure the weather monitoring parameters continuously and post all weather monitoring parameters like Temperature, Humidity, and Soil Moisture values on a 16X2 LCD Display as well as upload them into a cloud platform. Here I am using the ThingSpeak IoT Platform to store the data in a real-time environment. The circuit Diagram implementation is shown below in figure 6.

The power requirement of the project is 5V for STM32 also known as Blue Pill Development Board 3.3V~3.6V for ESP8266 Wi-Fi Module. Here I simply converted 5V to 3.6V using a Potential divider circuit, the diodes D3, D4, and 1K ohm Resistor is connected in series form, and each silicon diode is cutin voltage 0.7V. Here I am using two diodes in series 0.7V+0.7V=1.4V so the total voltage 5V-1.4V ~=3.6V. the circuit diagram of RPS (Regulated Power Supply) is shown in figure 7.

2. Now go to the ‘Channels’ menu and click on the New Channel option on the same page for further process. 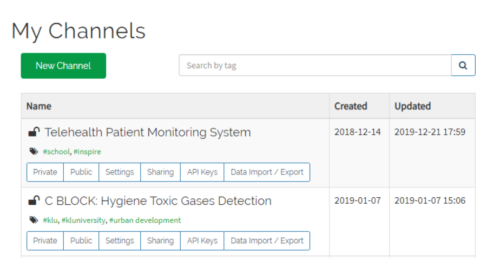 3. Now you will see a form for creating the channel, fill in the Name and Description as per your choice. Then fill ‘Temperature’, ‘Humidity’ & Soil Level in Field 1, Field 2, and Field 3 labels, and tick the check boxes for all three Fields. Also, tick the check box for the ‘Make Public’ option below in the form, and finally Save the Channel. Now your new channel has been created. 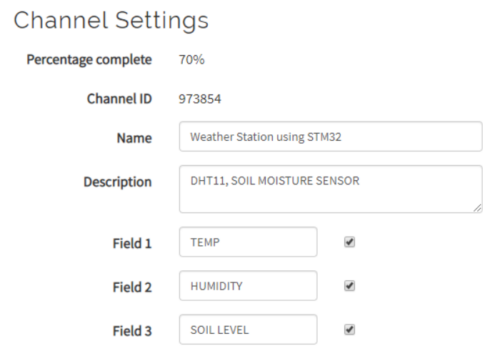 4. Now click on the ‘API keys’ tab and save the Write and Read API keys, here we are only using the Write key. You need to Copy this key in char *api_key in the Code. 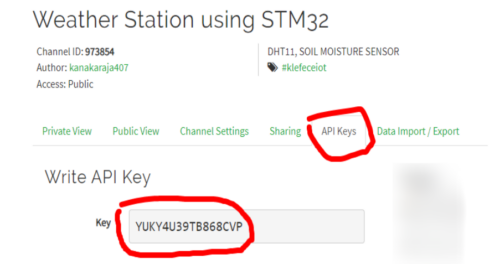 5. After it, in the sharing option, you need to select the “Share channel view with everyone” in the list which means the channel is configured as a public mode, and the Weather station data can access anywhere in the world as shown below. 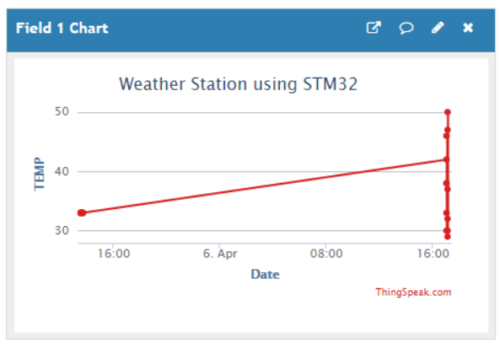 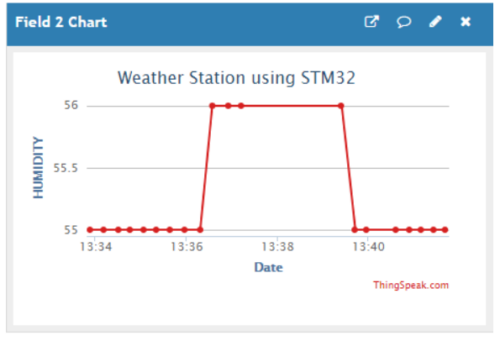 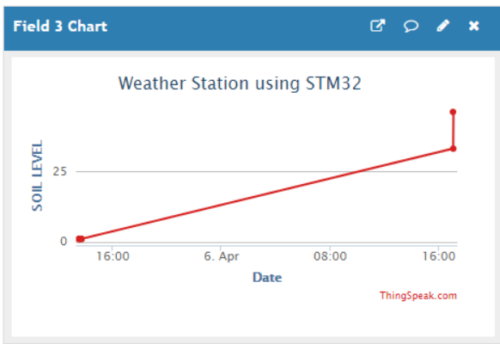 The above images are taken in System (Desktop or Laptop) captured images we can monitor the data in the system and as well as android Mobile images with the help of Thingview Android app it is available in the google play store, Here I am providing google play store link especially to monitor Weather station data in mobile when you are in outstation or you are in the journey as shown below mobile screenshots. 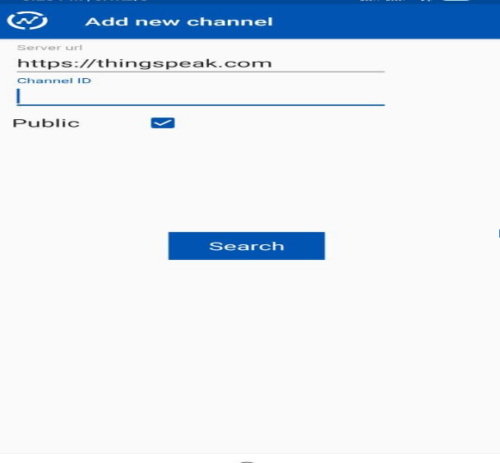 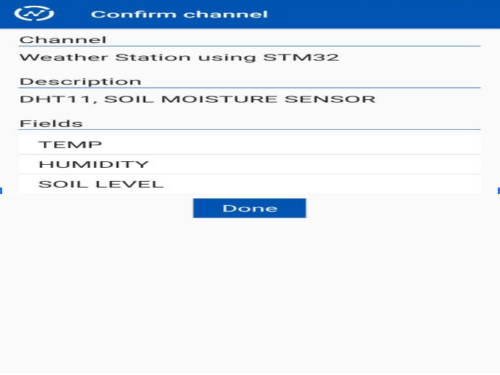 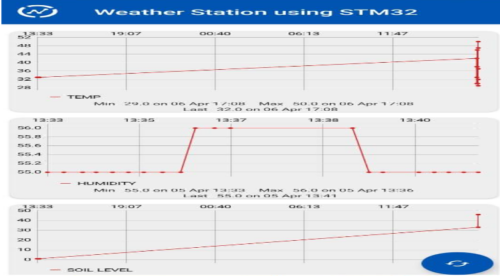 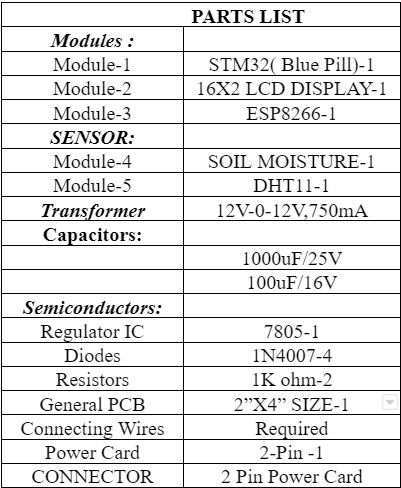 The STM32 is just another microcontroller from the STMicroelectronics family. So all the existing methods to program an ARM chip can be used for the STM32 board as well. One famous and commonly used IDE is the Keil ARM MDK and apart from that we can also use IAR workbench, Atollic TrueStudio, MicroC Pro ARM, Crossworks ARM, Ride 7, PlatformIO+STM32, etc.

Programming SMT32 through Micro USB Board

Now you might be wondering if we are using the micro-USB port to program the board. Actually, the STM32 Blue Pill development board when purchased does not come with a bootloader to make it Arduino IDE compatible. However, this bootloader can be flashed into the STM32 board, and then the micro-USB port can be directly used to upload the programs.

Follow the below steps to download and prepare the Arduino IDE to be used with the STM 32 Development board.

Step 1: If you have not yet installed the Arduino IDE, download and install it from this link. Make sure you select your correct operating system.

Step 2: After Installing the Arduino IDE open and download the required packages for the STM32 board. This can be done by selecting File -> Preferences.

Step 3: Clicking on Preferences will open the below-shown dialog box. In the additional Boards Manager, the URL text box pastes the link and press OK. As shown below in figure A.

Step 4: Now go to Tool -> Boards -> Board Manager. This will open the Boards manager dialog box, search for “STM32F1” and install the package that appears.

Step 5: After the package, installation is completed. Go to Tools and scroll down to find the Generic STM32F103C series as shown below. Then make sure the variant is 64k Flash type, CPU speed is 72MHz, and change the upload method to Serial as shown below in figure B.

Step 6: Now, connect your Micro USB board to the computer and check to which COM port the STM32 board is connected using the device manager. Then, select the same port number in Tools->Port

Step 7: After all the changes are made, check the bottom right corner of the Arduino IDE and you should notice the following setting being set. My STM32 (Blue Pill) board is connected to COM9 but yours might differ, Now the Arduino IDE is ready to program the STM 32 Blue Pill Development Boards Finally the prototype of the project is shown below in Figure C.