In many applications, harvesting of ambient energy sources becomes a necessity.  Wireless sensor nodes are thus becoming increasingly widespread these days for monitoring and recording parameters like temperature, humidity and pressure at diverse locations. The main challenge is that these sensor nodes need to be ultra-low power, since they can be placed anywhere where mains are not available and changing battery may be costly, impractical, or even impossible. Energy Harvesting generally involves powering a wireless sensor node’s battery from which energy is consumed in very short bursts over a long time. This allows making nodes with a range of many meters and several years life span. Energy harvesting nodes are ideal for a myriad of applications such as security systems, industrial automation, smart homes and agricultural systems.

If you are considering such a design, here are some reference designs from the industry which may help you in designing your own energy harvesting wireless sensor node applications:- 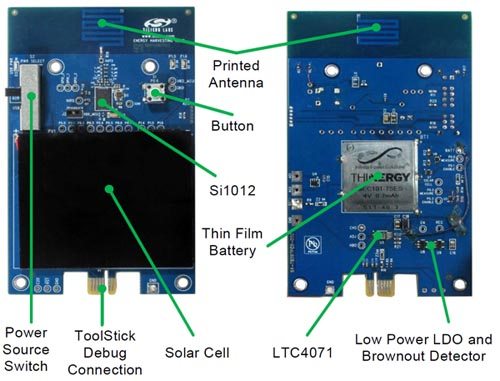 Silicon Labs has launched an energy-efficient wireless sensor node solution powered by a solar cell. The new energy harvesting reference design targets developers of home and building automation, security systems, industrial control applications, medical monitoring devices, asset tracking systems and agricultural monitoring systems. The wireless sensor node is powered by a solar cell, though there is an auxiliary input that will allow power to be sourced from other energy harvesting alternatives such as thermal, piezo or RF. The power that is produced by solar energy is stored in a thin film battery. The sensor node uses a Silicon Labs Si1012A wireless MCU to measure temperature, light level, and charge level, transmitting this data wirelessly to the EZRadioPro USB dongle, This data is then sent wirelessly to a USB adapter that is connected to a PC. The PC runs a GUI that displays the information graphically. The design includes wireless network and USB software and a complete circuit design with RF layout, bill of materials (BOM), schematics and Gerber files. More on this Reference Design

This design implements a low-power wireless sensor node operated by a battery. The wireless node can be used in a wide range of low-power applications including alarm and security (smoke detectors, glass breakage detectors, carbon monoxide sensors, and light sensors), home automation (appliances, garage door openers) and active RFID. The design centers on an ultra-low-power MCU from Texas Instruments (MSP430) and a low-cost 2.4 GHz transceiver (CC2500) designed for very low-power wireless applications. The wireless node data is sent to an access point wirelessly using a network protocol called “SimpliciTI”. A USB debugging interface enables the MSP430 application to remotely send and receive data from a PC. A PC GUI is used to analyze the data received from various nodes to the access point. The design files, BOM, source code and user guides are included in the reference design. More on this Reference Design