With an inspiration to bring AUVs in India and make it self-sufficient in underwater technology, a team of undergraduate students from IIT Madras with the association of Centre for Innovation (CFI), have designed an AUV called AMOGH. -- Pankaj V

Water bodies are still not being exploited to their full potential and assistance from science and technology is required to achieve explorations in greater depths and presently unexplored areas, which are beyond the direct human reach. The self-guided and battery operated intelligent robots, Autonomous Underwater Vehicles (AUVs), which can swim freely and are capable of carrying out predefined tasks autonomously under the water, are the ideal solution. AUVs are the alternatives to the remotely operated vehicles (ROVs), which are controlled and powered from the surface but often prove to be inefficient at the places where communication between the operator and robot is constrained.

The AUV technology is quite popular in some western countries and is also available commercially, with US being the leader in the AUV market. A team of undergraduate students from IIT Madras with the association of Centre for Innovation (CFI) have worked to come up with an all Indian version of autonomous underwater vehicle called AMOGH. 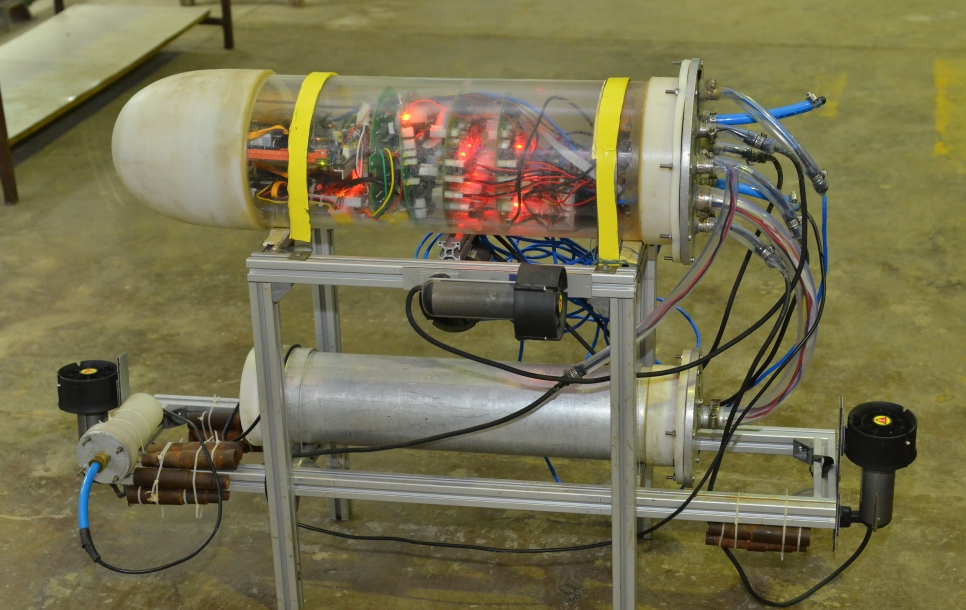 What’s special about AMOGH?
AMOGH is built using a powerful dual core Intel atom processor and an Arduino Mega 2650 microcontroller which can be pre-programmed for underwater navigation and imaging. It possess intelligence for enhanced maneuverability, vertical and horizontal profiling, picking/placing objects underwater and audio signal processing.

Inspiration
The team started constructing AMOGH with an initial aim to accomplish the problem statements of different national and international miniature AUV design competitions but the industrial applications of the technology were realized later and the need of India’s coastal surveillance and protection prompted them to upgrade the innovation to its industrial version.

“The main inspiration of the team behind this project is to bring AUVs in India to make it self-sufficient in underwater technology and capable of developing robust indigenous architecture for underwater vehicles,” said Sanchit Gupta, member of the team.
“The initiative of the Navy in 2008 to construct 10 AUVs for the purpose of coastal surveillance boosted the team’s confidence to achieve its endeavour. This was the main motive of the team behind the design of AMOGH,” he added.

The Research and the Challenges
Initially, the team started working on the ROV concept and after its successful testing, the design evolved to that of an AUV. The team struggled through the various challenges, and it took approximately a year for them to realise their vision.

The team did an extensive research on gathering the required set of resources and the important electronic components essential for underwater robotics, which had to be imported from abroad consuming a lot of time, as they were not available in India.

Sanchit explained the initial issues, “Since the team was the first one to start a project on underwater robotics in the institute, we did not receive any prior guidance or expertise. We had to do a lot of research on the subject which helped us in developing a concrete intellectual base.”

Structural designing of the vehicle was not easy either, “On the technical side, the major challenges were faced in achieving the waterproofing and static stability of the vehicle as well as in designing a compact robust electrical circuitry,” he further added.

The Structure
The team describes AMOGH as a ‘state of art and a modular design constructed using an intelligent choice of materials’. It is a hydrodynamic dual hull design with a heavy bottom which lowers the centre of gravity (Cg) and provides the stability to the vehicle.

The centre of gravity (Cg) along with the centre of buoyancy (Cb) lie in a single straight line separated by a vertical distance, owing to the symmetry of the components placed on the structure which in turn constrains the rolling motion and provides the with much required static underwater stability to the vehicle.

For propulsion, AMOGH consists of five thrusters giving the vehicle five degrees of freedom. The two thrusters on either side of the structure provide surge and yaw motions while those on the front and back assist in heave and pitch motions. The remaining one thruster is placed in the line of Cg and Cb which helps the vehicle with the sway motion.

It consists of several sensing solutions which provide necessary feedback for intelligent operations. For receiving accurate in-depth readings, the team designed and manufactured a submersible piezoresistive voltage output pressure sensor having an operating range of 2 bars and providing an analog output of 0.5V – 4.5V. Additionally, there is an Inertial Measurement Unit (IMU) for getting the orientation data, two on-board cameras for necessary image feeds, active/passive SONARs for processing acoustic signals, leak detector for detecting accidental water leakage into the hull and Current and Voltage sensors for relaying battery health and vehicle state parameters.