Bisquare develops a low-cost, handheld media player that can read out the books aloud -- JALAJA RAMANUNNI 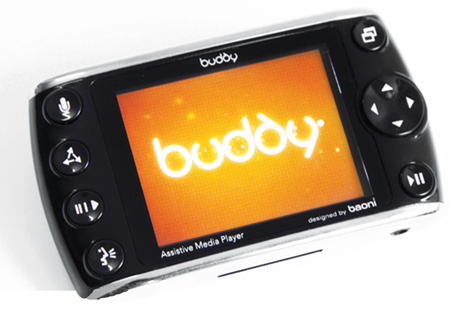 MAY 2011: At a conference, the CEO of a product design company noticed nothing peculiar—attendees discussed issues and took notes on their laptops. It was only after the meeting that he realised that one of them was visually impaired. The CEO wondered how the man managed to use the laptop like others. He wanted to find out more and approached the man, who turned out to be the head of IT department of the National Association for the Blind (NAB), Dipendra Manocha.

Manocha exclaimed that there were many devices in the market for the visually impaired, but most of them were expensive and beyond reach. This inspired the CEO of Bisquare, Ramendra Baoni, to work out a low-cost product to make technology accessible to the visually impaired. As a result, his company designed and developed Buddy player—a handheld media player that can be used by the visually impaired with ease. The media player is integrated with a digital talking book that can read out the menu and books aloud. The device is developed as a platform for education that allows the user to carry the learning material (e-books) on a media player.

What sets it apart
Buddy player has won the national award for ‘product innovation for the physically challenged’ from the ministry of social justice and empowerment. Priced at Rs 4000, its cost is one of its biggest USPs. Bisquare claims it to be the cheapest Daisy reader available for the visually impaired, with the closest competitor priced at about Rs 16,000.

“The price was deliberately kept low, knowing that most of the differently-abled cannot afford expensive devices. Conventionally, the device is designed using semiconductors or system-on-chip designed in the US or Europe, but as our price point was aggressive, we decided to consider other options,” Baoni reveals.

How it was made low-cost
In an effort to maintain the low-price tag, Baoni went to China where he evaluated the market for low-cost MP3 players. He visited design houses that made low-cost devices and met the key people there.

Baoni points out, “I realised that most of their core chip and price points are really good but they lagged behind in the quality of the entire product, like peripherals and plastic.”

He decided to adopt a highly integrated system-on-chip built by Actions Semiconductor and build a device around it. The chip includes a digital signal processor, audio codec, audio amplifier and power section. This reduced the number of components outside, which, in turn, helped to reduce the overall cost of the device. They also made sure not to over-design the product and fill it with unnecessary features.

Challenges in integrating Daisy reader
In the generic media player, Bisquare integrated the Daisy reader—a digital talking book technology that was developed in the US and Japan. Daisy is an international standard that has been adopted in India by the NAB, and now all the NCERT syllabus books from Class IX to XII are available in this format. Besides, a lot of books, magazines and newspapers are being converted to this format. It helps to create an HTML base content of the audio book and indexes its contents based on pages, sections, paragraphs, chapters, etc. This allows the visually challenged to navigate and bookmark pages.

Bisquare designed and architected the Buddy player, but got the hardware and firmware implementation done by a Chinese design house. The software and user interface design was implemented internally with Mrinal Madhukar as the lead developer.

“It is this collaborative effort that helped us bridge the barriers of language and bring down the overall price,” shares Baoni.

Why is it suitable for the visually challenged
At various stages, Bisquare interacted with Manocha and three visually impaired volunteers to test whether the product was user-friendly enough.

“When a visually impaired person uses an audio book, he wants to listen to it at a faster speed as he cannot see the visual aid. The volunteers pointed this out and we added a hot-key for changing the tempo of the audio,” points out Hemendra Varshney, product manager.

At one stage, one of the volunteers pointed out that the speaker should have been louder. So the amplifier was replaced with a high-voltage one.

The device incorporates a power saving technology that works by using suitable colours on the screen. Baoni elaborates, “The colours of the user interface can make a lot of difference in the power consumed by the LCD. In the user interface, we have used less bright colours to reduce the power consumption. Another power saving feature is the shutdown mode that switches off the applications which have not been used for a while.”

Buddy player is powered by a lithium battery that is easily replaceable and readily available at electronics stores. This increases the life of the product and also brings the maintenance cost down.