Drishti, developed by CSIR-NAL for Indian Meteorological Department (IMD), meets the specifications for visibility measurement instruments set forth by ICAO and WMO. It has a field-programmable gate array (FPGA)-embedded hardware and web-enabled data acquisition software built in LabView environment.

It basically comprises of a transmitter (a lamp with spectral characteristics similar to runway lights) that sends collimated beam of light and a receiver (an optical detector and associated electronics photopically-corrected to match the human-eye response) that is set up at a characteristic distance to collect the transmitted beam.

Drishti is a 30-metre baseline system covering low and high visibility ranging from less than 25 metres to about 10,000 metres. It is suitable for installation in all categories of airport—CAT I, CAT II, CAT III A and CAT III B. It also has provision for varying the baseline anywhere between 15 metres to 75 metres as per international standards.

The instrument is set up parallel to airport runway. A detector collects the transmitted light beam and measures the attenuation of light intensity caused while traversing through the atmosphere. It works on the principle that, higher the attenuation factor, lower will be the visibility of the runway. Data from field site is transmitted to ATC room, which is usually located 4 to 5 kilometres away, through cable and Wi-Fi.

A multi-disciplinary field product, the success of which is attributed to the effective and efficient use of physics, material science and several engineering streams, such as electronics, computer science, communication, civil, environmental, structural, electrical and mechanical engineering.

There were several technical constraints the team had to overcome during the development of this product. Since Drishti is a field equipment, it should be capable of withstanding harsh environment conditions like rain, fog, lightning and climatic variations (extreme heat of about 55°C during summer and snow in winter). As safety of aircraft cannot be compromised, a real-time operating system that works round the clock was necessary. Also, the system should be rugged with high mean time between failures.

The Drishti team was able to meet all these challenges successfully using virtual instrumentation concept. With a highly customisable application development software and modular electronics hardware, a user-defined system was developed. Increased reliability was achieved by reducing the part count to minimum. Eco-friendly, miniaturised, high-precision optics were used. The effects of weather and climate were offset by housing the electronics, mechanical hardware and the precision optics in environmentally-controlled enclosures.

After evaluating the performance of Drishti system in the critical fog season of December 2011 to February 2012, Indian Meteorological Department requested CSIR-NAL to install three more systems at Indira Gandhi International Airport, New Delhi, which is the most stringent and crucial airport of India to cover the requirement of 2012-13 fog season. In a record time of three weeks, the team developed the systems, installed them and received the International Class I certification. 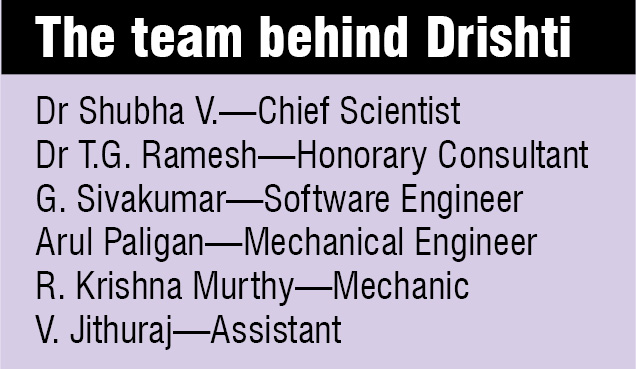 The Drishti system holds 14 copyrights. There are four patents and a trademark filed for Drishti under Intellectual Property Management Division (IPMD)—CSIR. Drishti has also been certified with International Class I NOTAM (Notice to Air Man).

The system has been recognised by various organisations and has won several prestigious awards like the Aeronautical Society of India Award for Indigenisation of Aeronautical Equipment, best innovation award of 2012 and 2013 by CSIR-NAL and IETE Diamond Jubilee Corporate Award for performance in Electronic Instruments & Instrumentation in 2013. It has also received NRDC Meritorious Invention 2012 award and IESA Technovation 2013 award for Most Innovative Product.